When I first heard about Toy Story Land being created at Disney’s Hollywood Studios, I knew my kids would be excited to check it out! We’ve been Toy Story fans forever, so I knew they’d all want to actually see this magical world of Toy Story come to life. We finally had the chance to check it out this past weekend and it was everything they imagined it to be and then some! 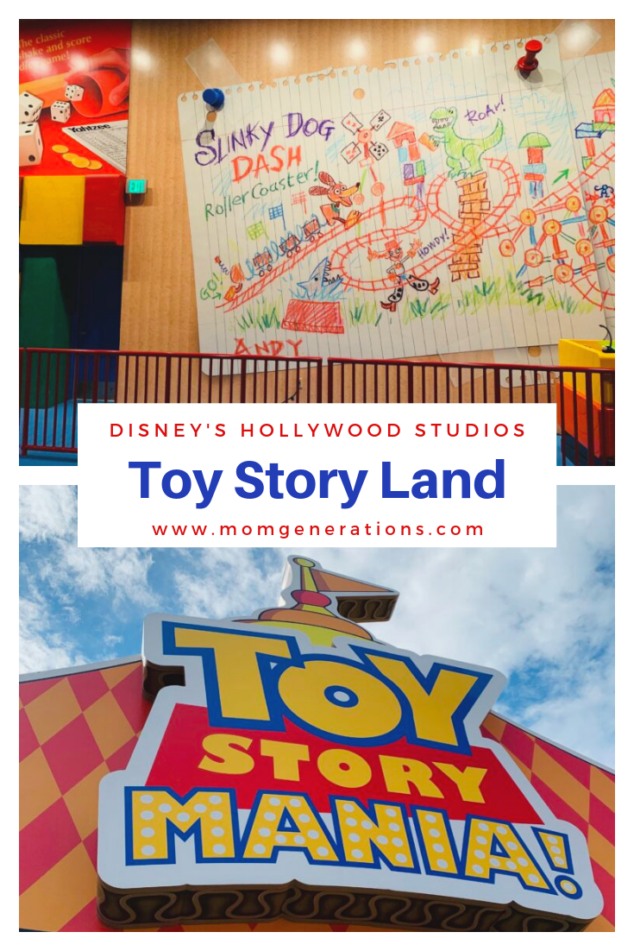 Let me kick off this post with this little Toy Story tidbit. We’ve gone to Disney World about 6 times with the kids. Every single time we’ve arrived, the one request from the boys has always been to go to Toy Story Mania at Hollywood Studios. It’s never been to go see the castle or the gigantic Epcot ball, it’s ALWAYS been Toy Story Mania. It’s just sort of been the go to place for the boys throughout our trips to Disney World. They’ve loved it, so knowing that I knew that Toy Story Land was going to be a mecca for them! 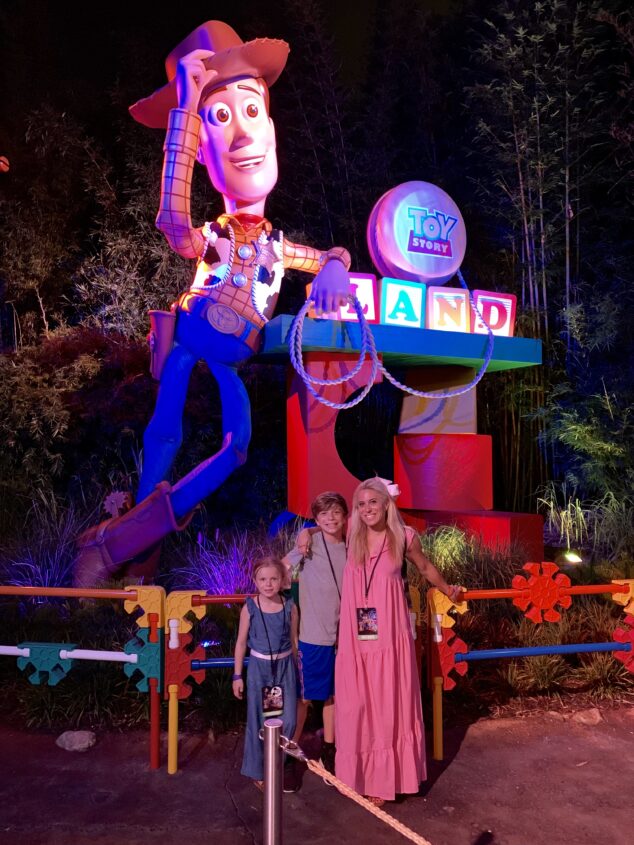 When you walk into Toy Story Land you actually feel like you’re part of the Toy Story World, it’s that kind of immediate. For fans of the Toy Story – adults and kids alike, your heart rate actually picks up because you can feel the excitement out of the gate! I can’t quite put the feeling into words properly, but it’s AMAZING. You immediately are greeted by Woody – not only in voice, but there’s a huge Woody character right there to let you know you’re at the right place! 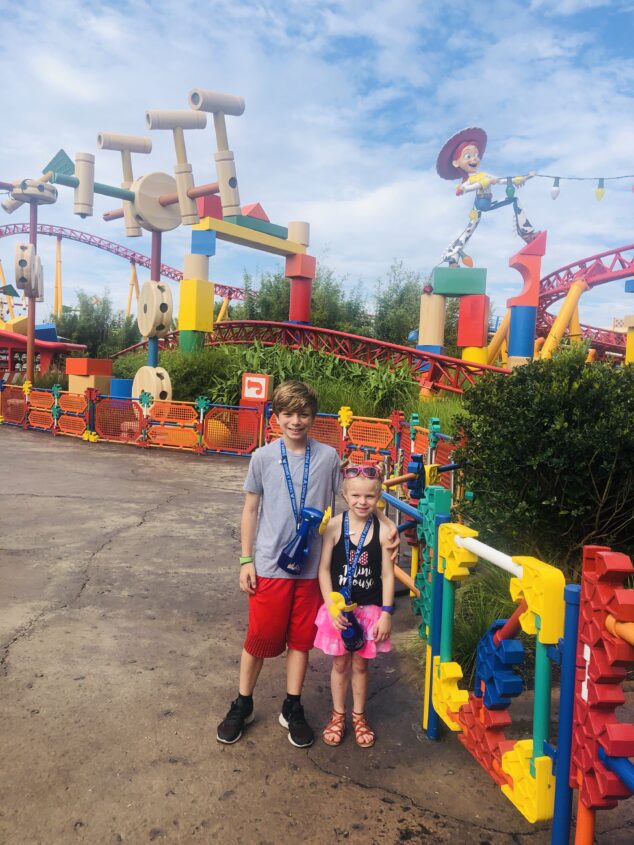 Since we got to visit Toy Story Land as part of the Toy Story 4 Disney press trip, we experienced it at night under the lights. It was incredible! Henry and Victoria loved it so much that we took them during the day, too! I wanted to make sure they were able to experience the magic of this world both during the day and at night. With Hollywood Studios open during the day and night hours, all guests have this option too. 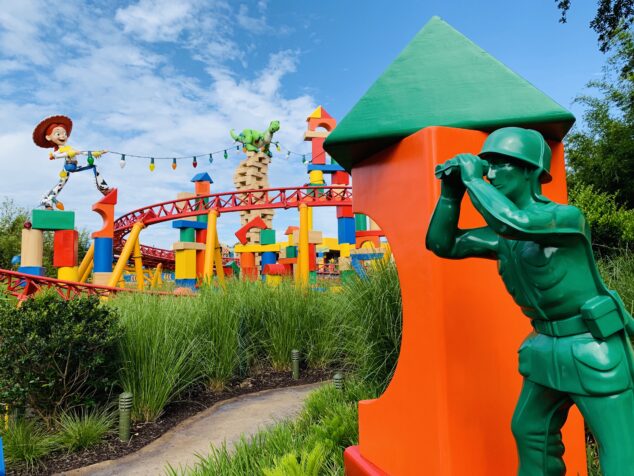 There are 3 rides at Toy Story Land that will bring lots excitement and joy to your visit. I personally love that each ride at Toy Story Land is created to make your child (and you!) feel like you’re part of the Toy Story world, too. We went on each ride multiple times and you (literally) couldn’t wipe the grins off our faces – all the way from my husband to my daughter! 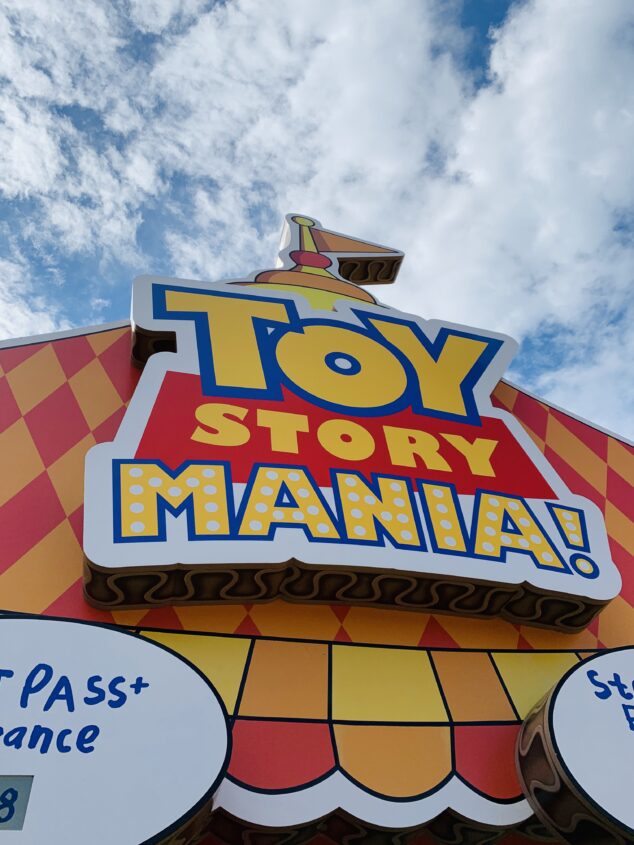 Zip through an exhilarating 4D shootin’ game starring Toy Story characters—and blast away. Step inside Andy’s room and make your way through a toy chest full of classic games before picking up a pair of special 3D glasses. Then, board a carnival-inspired tram and use your spring-action shooter to take your best shot at an array of moving targets. 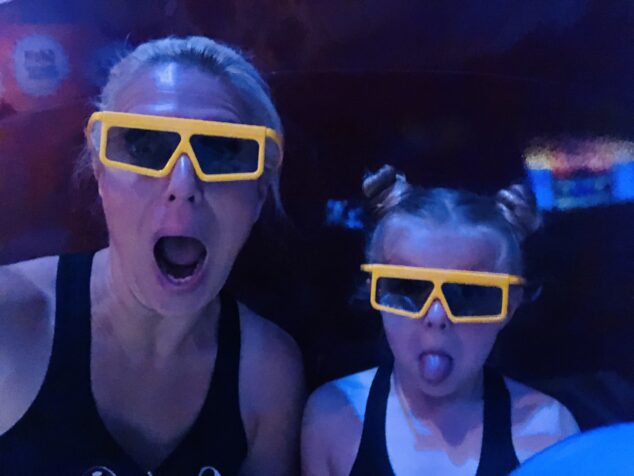 OK, I have to kick off the rides with this one since it’s a family fave! This is by far the most fun and the best ride / game for the entire family! There are zero age restrictions on this one. I actually remember taking Victoria on this one when she was 8 months old. She couldn’t play (obviously), but it’s that kind of pace and that kind of family ride. This is one of those rides and games that your kids are going to want to do over and over and over (and over) again!  I also personally love that this ride / game lasts a good amount of time so you feel like it’s definitely worth the wait time.

There are 5 fast-paced games to play. As each game is completed, your tram will spin and slide to the next game.

Honestly – this is an absolute MUST DO while at Toy Story Land! Please promise me that you will do this one!!

Take off on a family-friendly coaster that twists and turns past giant toys and springs across Andy’s oversized backyard! 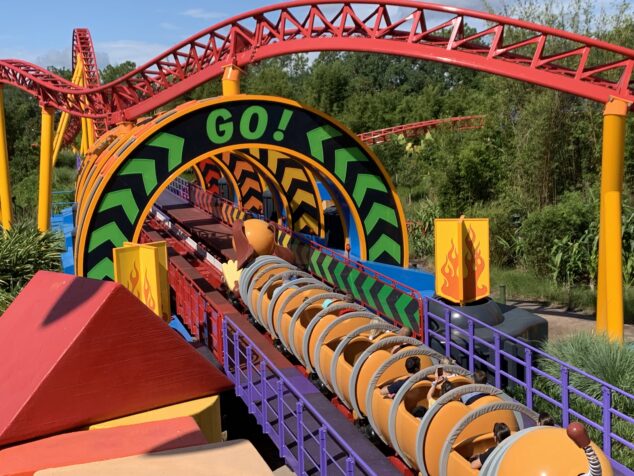 I’m going to be honest with you, I’m not a lover of roller coasters. I actually avoid them at all costs if I can! My son Henry was dying for me to go on with him, so I gave it a whirl and absolutely LOVED IT! It’s fast enough to be fun for all ages, but it’s not scary. There are a few drops, but they’re NOT crazy and I appreciated that for this particular ride in this particular Land. 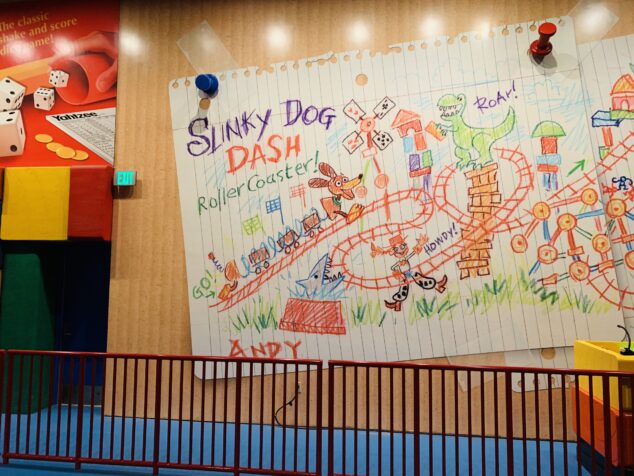 I actually ended up going on it about 4 times! If you know me in real life, you know that that doesn’t just happen for me. This is a MUST DO and worth the wait in line (if you can’t get a fast pass). Also for reference – it’s for kids 38 inches or taller.

The cutest extraterrestrials in the galaxy have landed, and they’re taking you for a ride. Power up the saucers for an interstellar romp through space, while futuristic tunes set the mood. Space cadets of all ages may enjoy this gentle whirl through the sky above Toy Story Land. 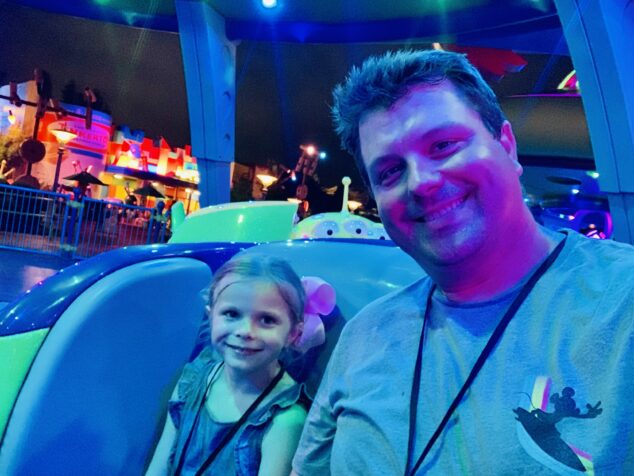 This is a fantastic ride for the entire family! It’s a fun one that you laugh on and really have a fun time swirling all around on! Victoria fell in love with this ride and wanted to go on multiple times! It’s not quite as fast as the tea cups, so don’t worry about feeling super dizzy on this one! I really thought it was a cute ride and loved the theme with the aliens! For reference – you must be 32 inches or taller to ride.

I know my kids LOVE to meet characters while at Disney! It’s one of the true highlights for everyone and honestly – these are the photos that I keep and frame and put all over the house. These are the photos that I personally love and feel like embody the magic of Disney for my family. While you’re at Toy Story Land you have the opportunity to encounter Toy Story characters and take some photos!

We were on the hunt for specific characters while there and Jessie topped that list! The second Victoria saw Jessie, she rean for the line and wouldn’t leave until she got her photo! Jessie was exceptional with all of the kids and took the time to “talk” with them and take photos. This really made Victoria’s day to get this magical photo. 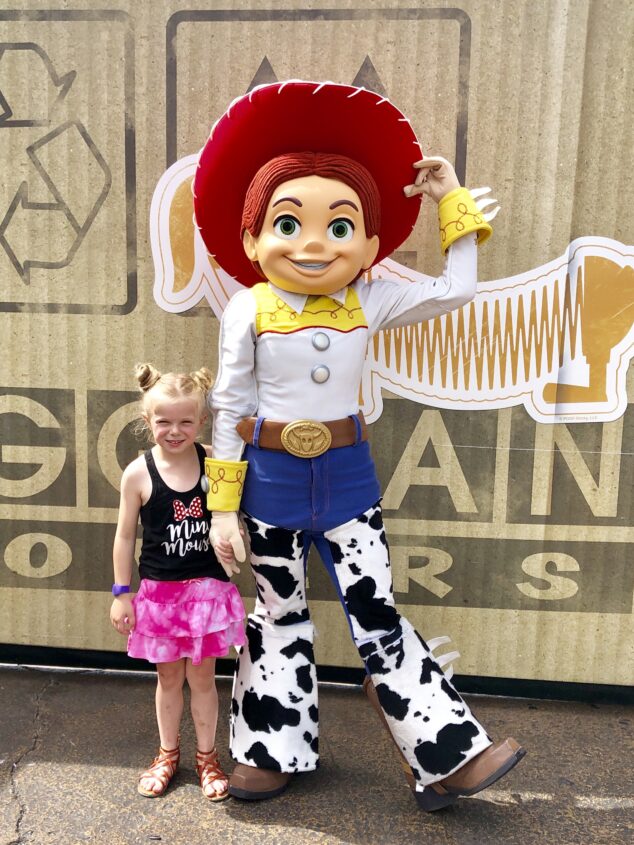 We also had the opportunity during our press trip to see Bo Peep (who we saw walking around during the day, too!) and Woody and (AHH!) Forky! I couldn’t pass up a photo with Forky, so I jumped right on in with my Victoria! Not to mention – as you can see – Victoria dressed up as Bo Peep for the press trip, so being able to get in a photo with the “real” Bo Peep was super fun for her, too! 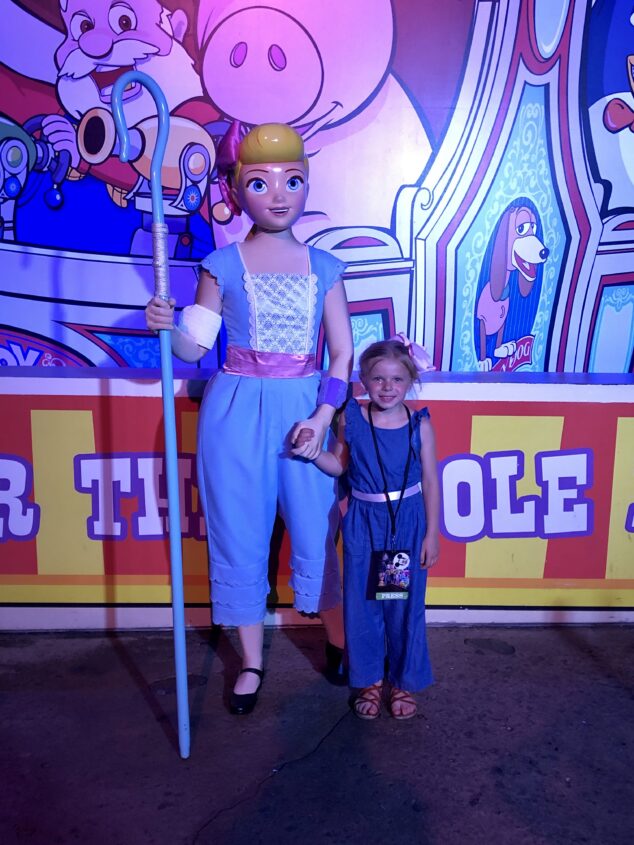 The Green Army Patrol also walks around talking to guests and following them around, too. We actually just stopped and watched them for awhile when we were there because they were so funny and so quick witted with the guests! They actually marched behind a family for a good amount of time before the family even discovered it! It was a riot and truly a fun added bonus to see while at Toy Story Land.

We just had an incredible time exploring and riding while at Toy Story Land! We promised the kids they could each get one item from the carts set up throughout the area and they chose a Bo Peep stuffie (Victoria) and an actual slinky dog for the stairs that lights up (Henry). If you’re looking to bring back at trinkets or toys or gear, they have tons of it throughout Toy Story Land and Hollywood Studios, too! Get ready for the requests because you almost can’t say NO!

I hope you have an amazing time visiting! I was truly impressed by every aspect of it and really can’t express enough how cool it was to be part of the Toy Story world while there. It’s a must do while visiting Disney World, that’s for sure! 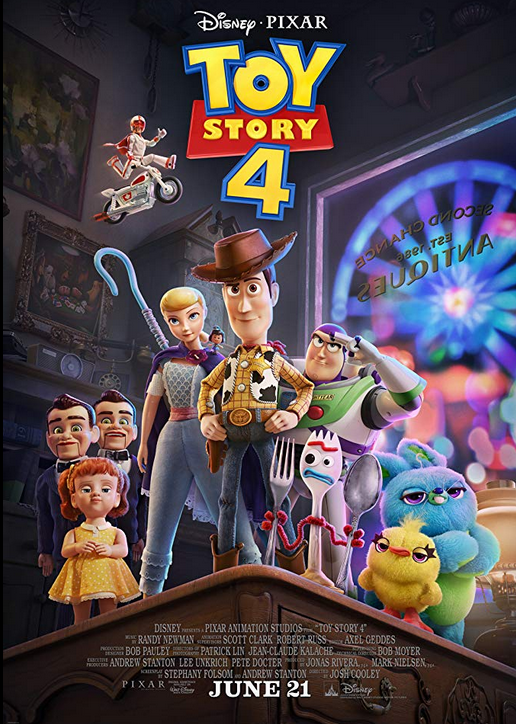 Make sure you see the movie Toy Story 4 out in theaters on June 21st!

Check out my YouTube channel for all of our videos of Disney, too!

Other places to visit:

Pandora the World of Avatar

Rivers of Light at Animal Kingdom