Toy Story 4 is everywhere right now! As I said in my last post,  I was counting down the days for this movie to be released.  When I was invited to head to Disney World for the Toy Story 4 press trip with Matt, Victoria and Henry in tow – I jumped at the opportunity because I knew this would be something we would never forget. Not to mention the dream team of Toy Story 4 Keanu Reeves, Tim Allen, Christina Hendricks, Tom Hanks, Annie Potts, Tony Hale. It’s a (huge) dream team. 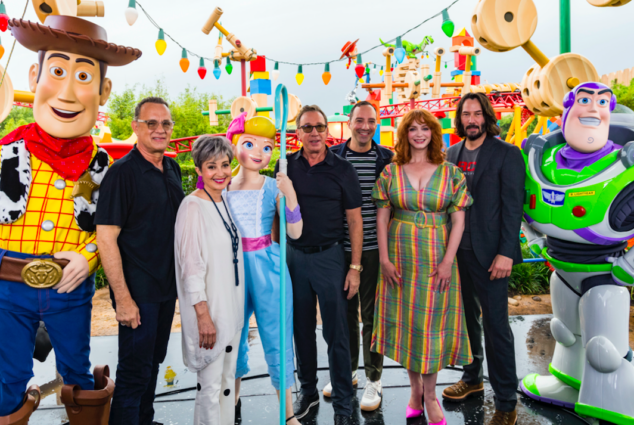 I actually can say now that I was feet away from Keanu Reeves. Actually FEET away. That made the press trip to begin with for me! I’ve loved Keanu Reeves since Point Break and SPEED! 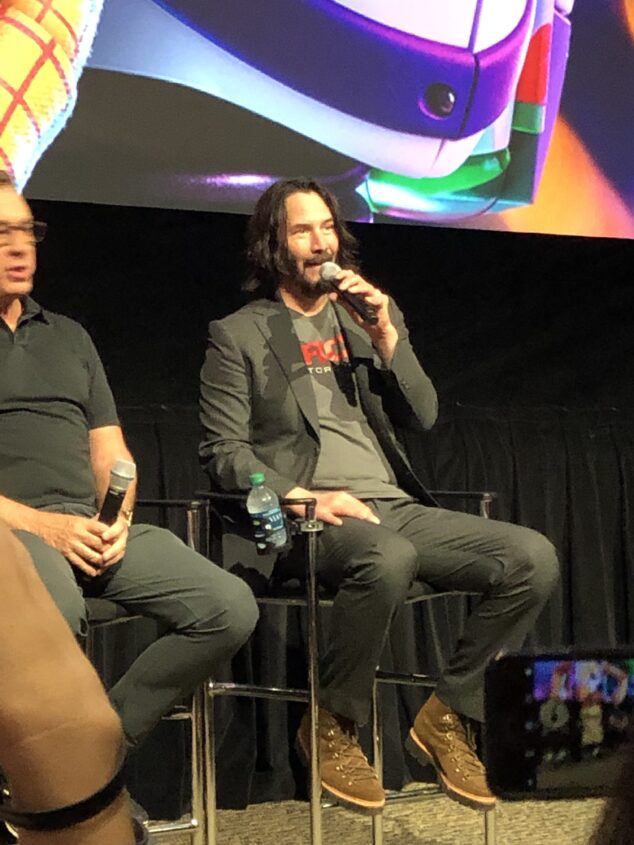 All eyes were on Keanu Reeves and Christina Hendricks immediately at the press conference because they were the “new” kids on the block when it came to Toy Story 4. The first question out of the gate for the dream team was about Keanu and Christina being part of this iconic franchise and what it meant to them.

Keanu Reeves answered the question first with a big smile on his face. “It was a great honor to be invited. For me, I was really excited. I knew I wasn’t going to be able to work with Tim and with Tom, but I knew that working with Pixar and being with these characters and these performers that I was getting a chance to be a part of something that’s legendary. And so I was really excited and Pixar gave me a great character with Duke Kaboom, so it was really fun to be a part of this story.”

Christina dive right into what it was like playing Gabby Gabby, who (honestly) I grew to love by the end of the movie. Christina’s take on her was wonderful and really real and honest. “I think when children see this movie, she [Gabby Gabby] comes across as sort of like the villain at first. And then you realize that she’s coming from a very loving place. I think that’s important to say that maybe when you don’t like someone at first, how did they get there and why are they there? Understanding their story. I think she’s very special in that way. Then she sort of gets embraced by the group. And then it’s about support and I honestly thought it was a joke that they asked me. I kept thinking there were like three other people up for the same thing!” 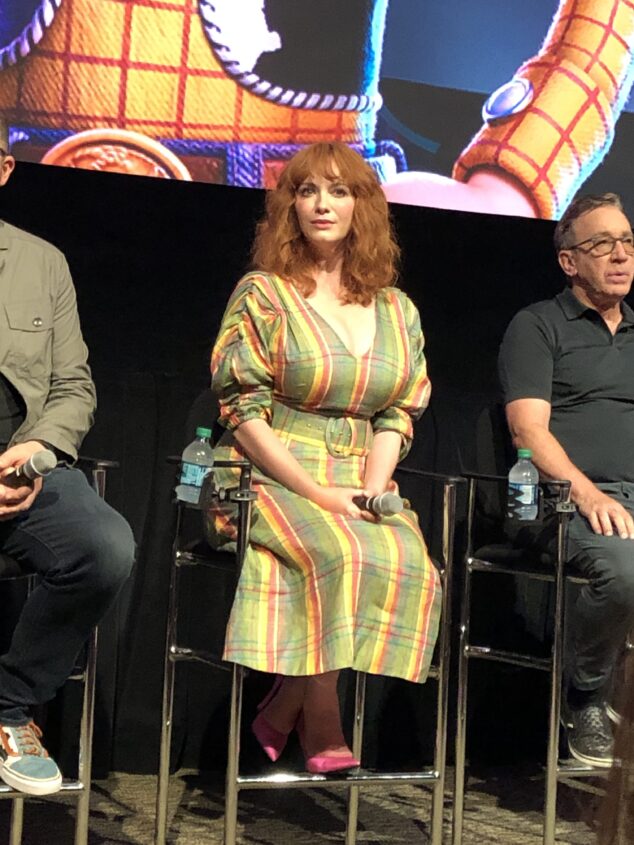 I loved hearing her share this because it made Christina seem even more normal and real to me. I loved that she showed her truth and her honesty among us. She actually thought there were other people up for the role! How crazy is that because she’s the most perfect person for Gabby Gabby!

It was awesome seeing Tim Allen on the stage, too! I mean – he’s BUZZ! Buzz is iconic. Buzz is part of my kids’ lives. Buzz is BUZZ! I’ve always been a Tim Allen fan and he was funnier than I thought he would be in person! Just a really great interview because he’s just ON. He knows how to work a room and I loved that about him. Someone asked Tim how Buzz has grown and evolved in the years. 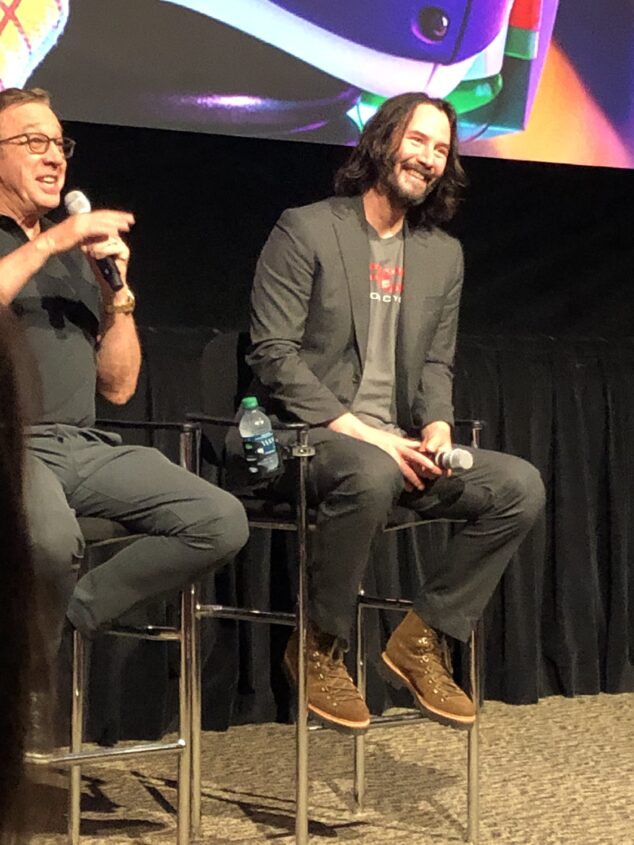 Tim took a second to answer, “It’s funny to watch this whole transition. At one point, Woody is mean and yells at Buzz ‘you are a toy.’ And I had to transition from a that because Buzz has always been wonderfully ignorant about who he was, that he was a toy. His core has always been this little authentic kind of soft heart, but no heart at all. And you’ll see in this movie, it’s kind of weird about that. Woody has this inner voice. I think it’s the sweetest part of this movie, but I don’t understand that whole thing. I love this ignorance. It’s not ignorance. He’s innocent. That’s a better way of saying it. And Woody is just one of his best friend’s. And you’ll see through this thing. That’s the journey through this thing is how cool of friends these guys are.”

As we all sat there in awe of these amazing celebrities and filmmakers, a female in the audience asked a question we probably have all had on our minds. 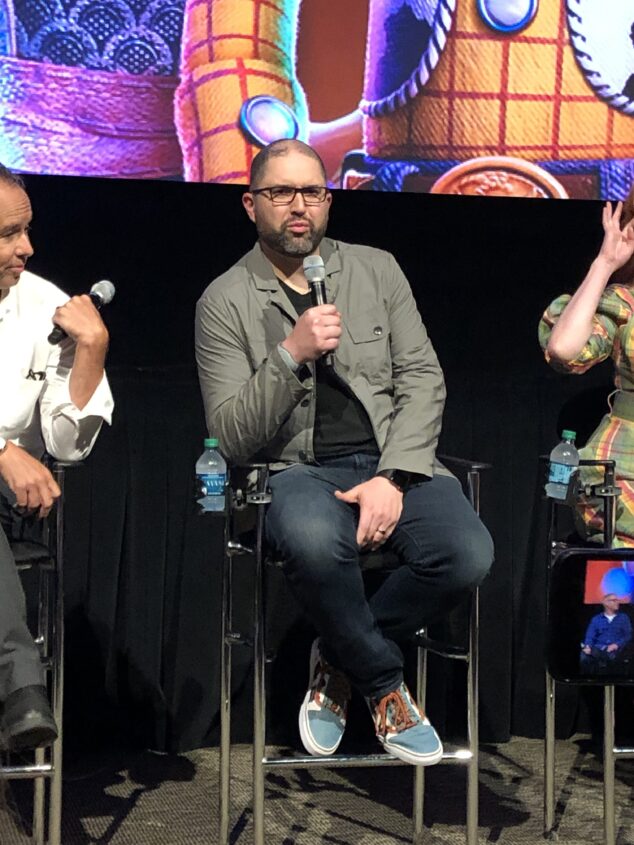 “Toy Story 3 put such a perfect bow on the trilogy. How did you feel about doing 4?”

Josh Cooley took this one. “We had the same questions everybody else has right now. ‘I thought you guys were done?’ We had those questions five years ago when we started. Your question was like the responsibility. Tons of responsibility, tons of pressure. A lot of sleepless nights knowing that we were going to attempt this because we love the end of Toy Story 3. I feel like that’s the completion of Woody and Andy’s story, but there was more Woody story to tell. So that’s how we approached it.”

Of course the next appropriate question then was, “Will this be it?”

Jonas Rivera laughed, “Well, we sort of joked that we thought Toy Story 2 was the last one. When we finished that one, we thought that one was the end of the story. And how we approached this was, to echo Josh, the end of Andy’s story and Woody’s story, but Woody is the protagonist. This was the final chapter. And as filmmakers, to be honest, we feel satisfied that this is where you can end it. Now there’s an implied future to all these films and we sort of never say never at Pixar. But as storytellers, we’re satisfied with this as the closing of the chapter.

The best was the way the press conference ended, someone asked what it was like having the cast see the movie. How did they react? How did they feel? What was their reaction? 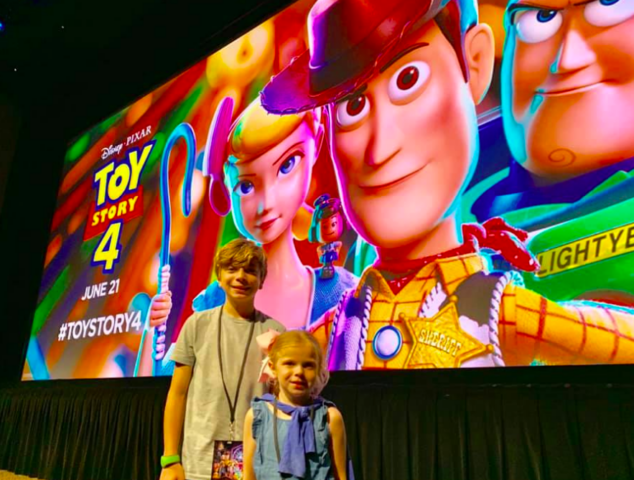 Tim answered more seriously than he had at all during the press conference so far, “It’s similar to when my life began with Home Improvement. I never thought about the future. I just thought, can I get through this? Can I finish this? Because I had no idea what the result of that would be. And the same with Toy Story. This is a very difficult process for me to do these movies because I don’t get to work with the other actors and it’s just difficult. I have a hard time doing this. It’s not the easiest thing. And to do one, I can’t believe we got through this. I hope everybody likes it. I hope that you appreciate what these guys have done. I loved it. I never look forward past that. It was great. Number two was an amazing occurrence.  I like the fact that this is a series of stories. And when I saw, I think Buzz and Woody were on a pencil racer at a McDonalds or something. As weird as that sounds, we’ve hit a high mark when you become an icon. I never thought of that. It never occurred to me and I’ll say it again. There is a theme park out here. A theme park. I love theme parks. There’s a theme park. And a really, really good one and a really spectacular one that’s about this movie we started 25 years ago. I can’t describe except I’m honored and humbled to be part of this thing.”

I’m going to be honest with you, I started to tear up. You can tell that NONE of them thought Toy Story would go this far, be this big. None of them went into this journey at the beginning knowing or thinking what would be or what could be, they went into it because they loved the idea of the film. It was really amazing to hear this kind of rawness from Tim Allen.

The dream team of Toy Story 4 Keanu Reeves, Tim Allen, Christina Hendricks and the amazing filmmakers dazzled me so much! I was in awe of them and their love and passion for this film.

What an amazing press conference! So blessed to have been in the audience listening to this incredible dream team!
You must see this movie with your family!

See all about Toy Story Land while at Disney’s Hollywood Studios, too!