How many of you have heard about the new American Girl Courtney? She’s HERE and she’s ultra cool! I feel like Courtney is the perfect American Girl doll right now because she brings so many moms out there right now back to her childhood… the 80s!

Were you an 80s girl? I was born in 1978, so though I was born in the 70s I consider myself a true 80’s girl because it’s all I remember! I remember Madonna and jelly shoes and scrunchies and high bangs and leggings with lace trip and walkman devices and everything. When I saw the American Girl Courtney, it was like reliving my childhood.

If you haven’t seen the new American Girl COURTNEY yet, let me introduce you to her!

Courtney Moore is growing up in California’s San Fernando Valley. She’s a total ’80s girl whose favorite place is Smiley’s Arcade because she loves playing video games. Courtney likes being in control of what happens, which isn’t always the case in real life.

She and her stepsister, Tina, don’t always get along, and now that Courtney’s mom is running for mayor, things are changing at home. It’s a whole new game for Courtney, and she’s figuring out the rules as she goes.

(She’s been DYING for this one!) 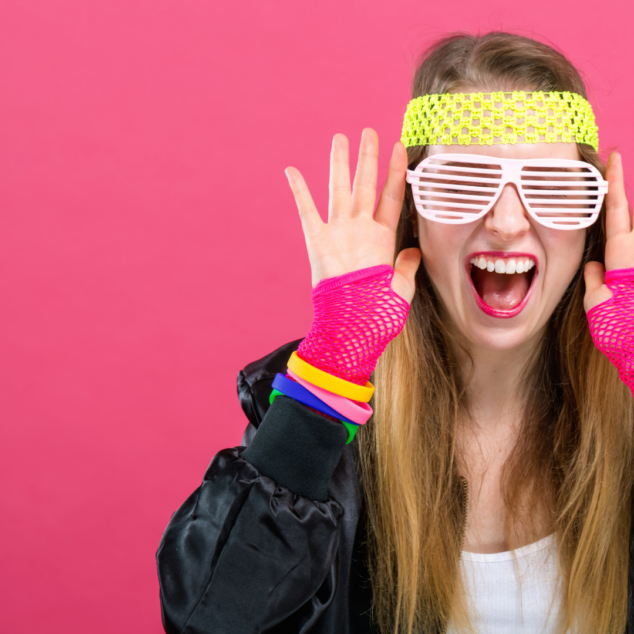 My daughter Victoria is American Girl’s biggest fan! The toughest thing for her this year was not getting to head to the American Girl store in NYC for her birthday. We had been planning a BIG trip for her for her 7th birthday in July, but everything got postponed.

The SECOND we heard about the new American Girl COURTNEY, Victoria was excited. When Courtney arrived, it was like a celebrity had arrived at home. Victoria couldn’t wait to open her up! 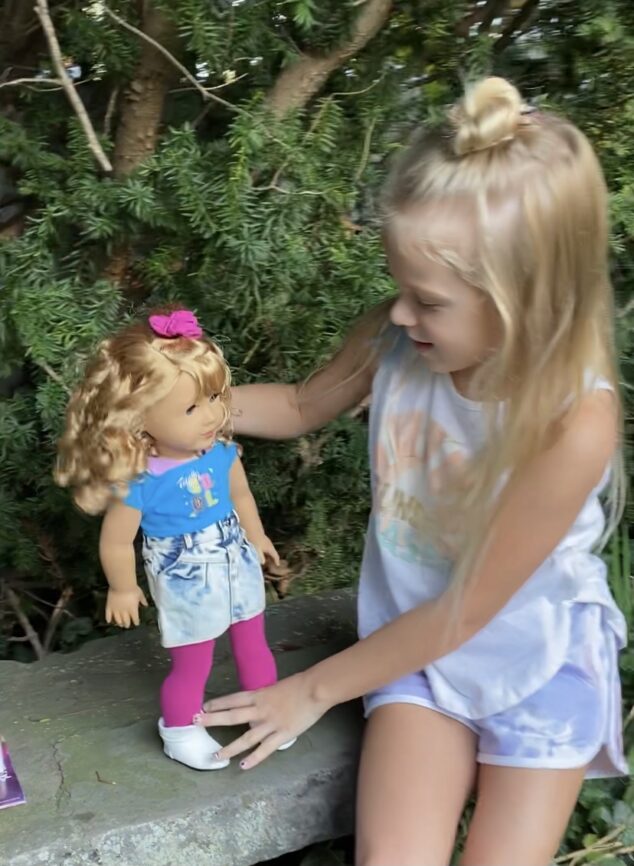 Right out of the box, she was ready to play with Courtney! 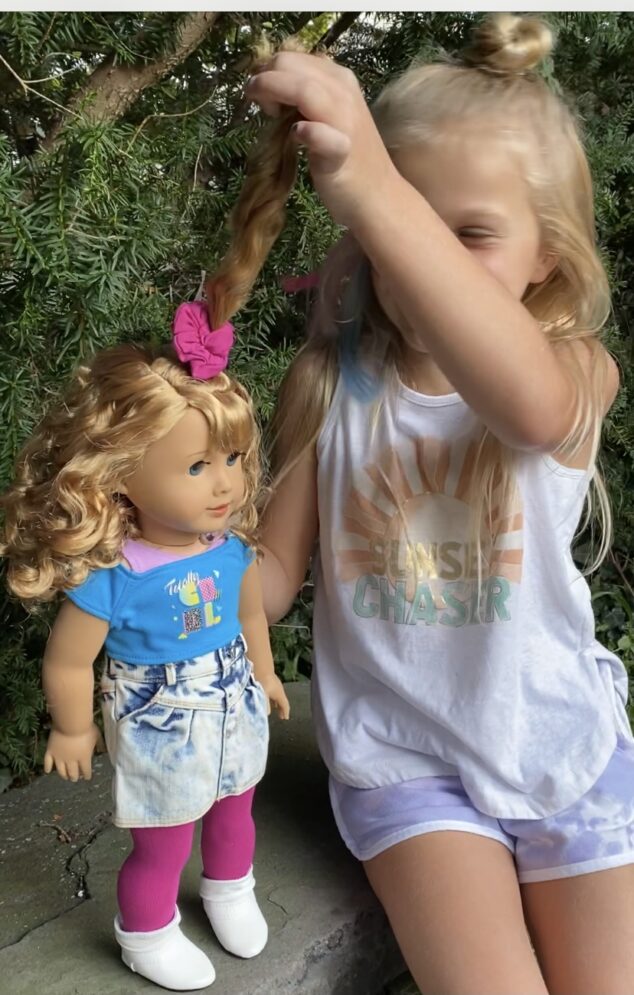 As with many kids, my daughter starting asking me if I could do her hair like American Girl Courtney. She kept touching it and playing with it and wanted to know if I could make it wavy and curly like her hair. I knew with a curling wand I could make it happen!

I thought it would be fun to recreate the Courtney’s style! 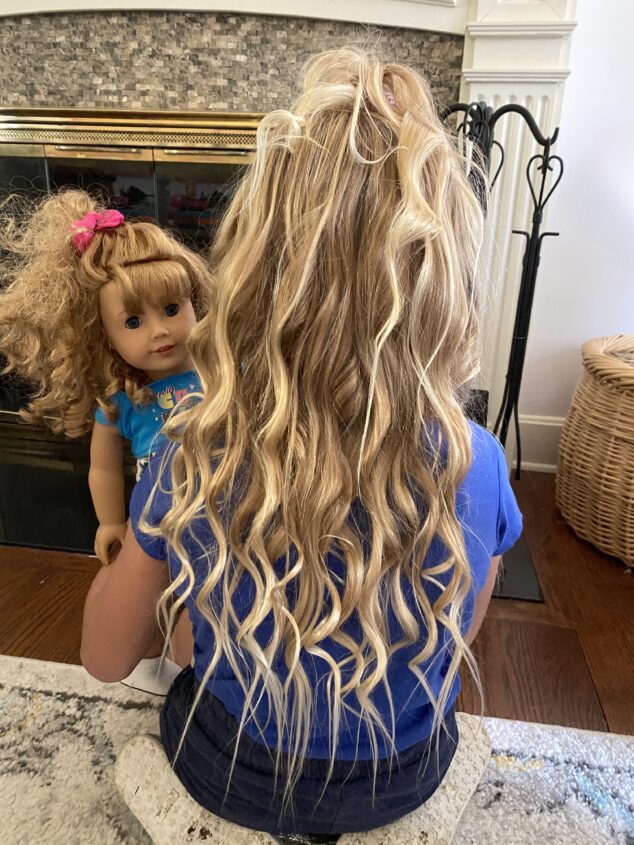 Here is our BEFORE photo! 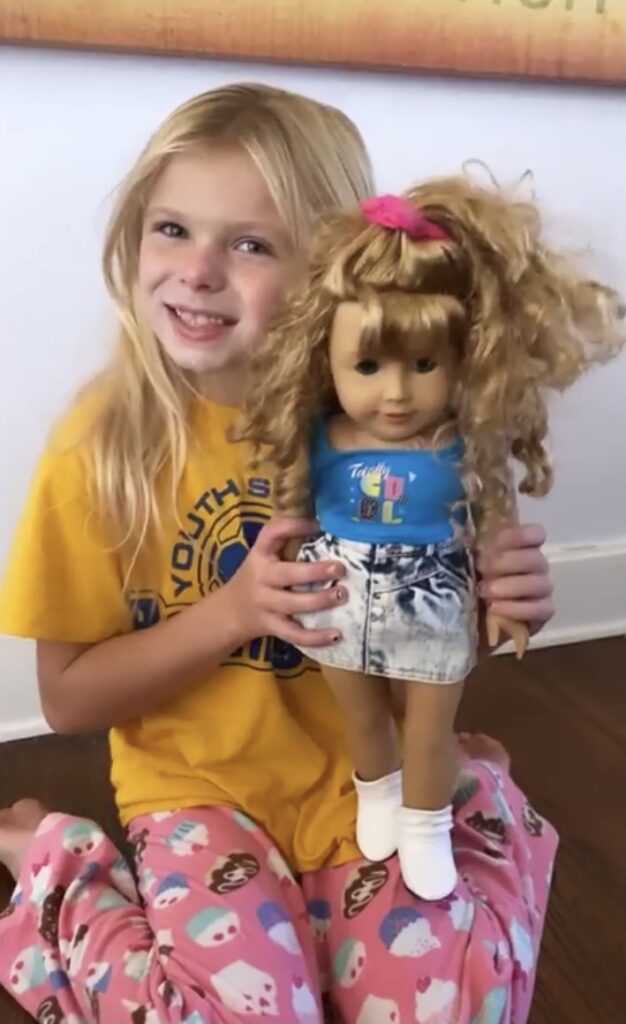 If  you’re looking to have some extra fun with Courtney OR any other American Girl dolls, try to do your child’s hair like the doll’s hair. My daughter has never sat so still while I curled her hair to make it wavy!

If you’re not familiar with us here, I love to do hair videos on TikTok and Instagram Reels with Victoria (head over to check us out!). This hair tutorial or hair transformation to look like American Girl Courtney was a fun one for me! I knew how Victoria wanted her hair, so it was easier to follow along and mimic an exact style.

80’s HAIR VIBE with @americangirlbrand 🥰 She was in love with Courtney’s curls and scrunchie pop! So we recreated Courtney’s hair!! . . Curl your daughter’s hair with tight curls and then rake your fingers through to make them spiral. Find a cute scrunchie and take the crown of the hair and pop it up! Fun and easy! And also super cute! As a 1978 baby, I love love love the 80’s vibe! #hairstyles #hair #hairstyle #80s #80sfashion #americangirl #courtney #hairtutorial #hairtutorials #hairtransformation #funhair #funhairstyles #curly

How To Do This Style:

1. Take your child’s hair and brush it as straight as you can get it.

2. Find a really good curling wand to use. I JUST bought this bubble wand for us and I love it. It’s so easy to wrap the strands around the bubbles. It serves as an easy guide for curling. Buy it here for $28.

3. Take your time and curl your child’s hair. I like to grab sections that are on the smaller side so her hair really has a good bounce to it. I wanted it to look VERY 80’s, so the tighter the curls – the better! 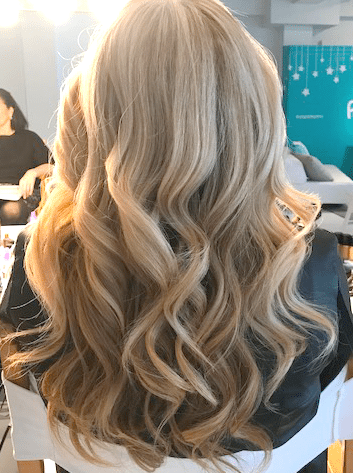 4. Once the hair is curled, take your fingers and just rake it through the curls to separate them and make them a bit bigger.

5. Then take a section from the top – right at the crown of the head and band it together with a scrunchie. This is how you get that “totally tubular” 80’s hair scrunchie pop. It’s how the American Girl Courtney has her hair and it’s the final touch!

Once complete your child’s hair will look JUST LIKE American Girl Courtney and she will love, love, love, it! 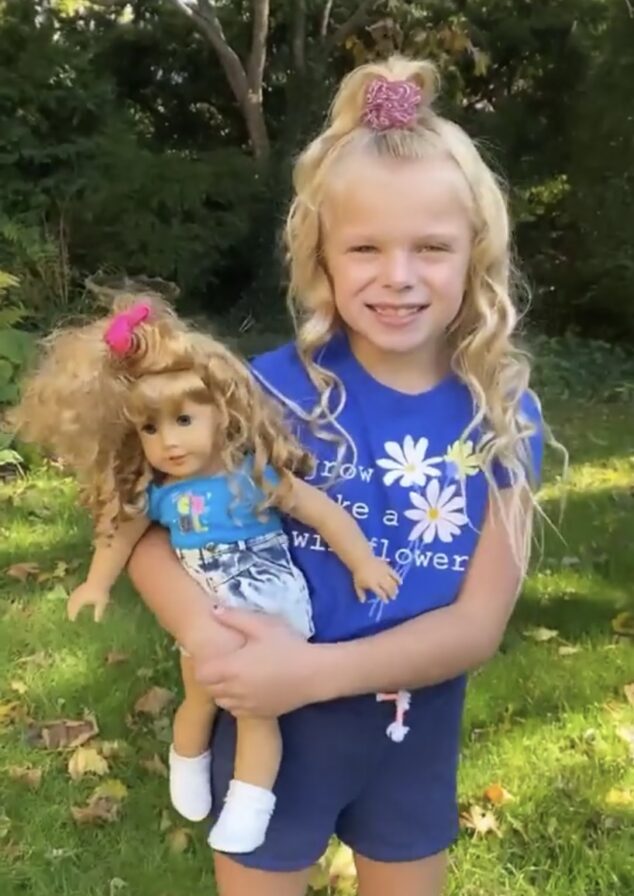 Victoria couldn’t stop looking at Courtney’s hair. She loved that her hair was so curly and wavy, just like Courtney’s! I guess I don’t do this to her hair enough! 🙂

If you have a child who is OBSESSED with American Girl, I’ve got a GIVEAWAY for you! I’m giving away an American Girl Courtney Doll. It’s the perfect time near the holidays to give one away! You will love this Doll and there’s so many additional accessories and clothes and items for you to buy for Courtney, too!

If you wanted to know more about American Girl Blaire, I wrote all about her last year, too!

American Girl Courtney – How To Do Courtney’s Hair and GIVEAWAY!! was last modified: November 18th, 2020 by Audrey McClelland
SHOWHIDE Comments (16)

American Girl Courtney – How To Do Courtney’s Hair and GIVEAWAY!! was last modified: November 18th, 2020 by Audrey McClelland