The Big E is known as “New England’s Great State fair.” I’ve “known” about The Big E my entire life. It’s the largest agricultural event on the eastern seaboard and the sixth-largest fair in the nation. It’s *kinda* a big around here! The Big E is inclusive of all six of the New England states: Connecticut, Maine, Massachusetts, New Hampshire, Rhode Island, and Vermont. The cool thing is that each of the New England states is prominently represented at the fair. 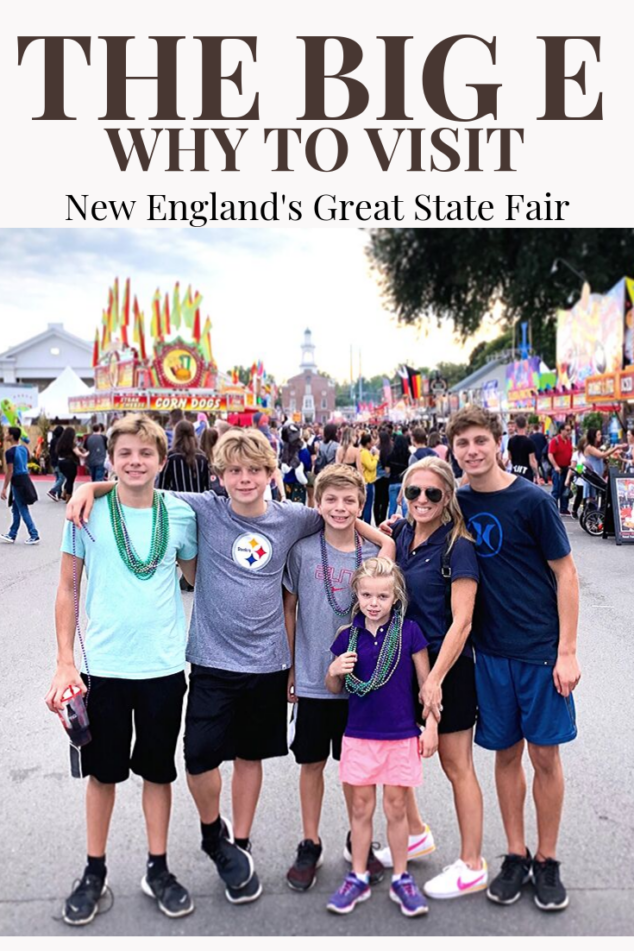 I’ve can’t believe I’m admitting this, but in my 41 years I’d never been to The Big E until this year. My mother worked it while she was in college, so I’ve (literally) always known about it, but just never been. I was thrilled this year to finally take my entire family and indulge and enjoy the fair throughout the day. This season has been a big Fall Festival time for us for our family! I always feel like I’m part of the Gilmore Girls!

If you’re not familiar with The Big E it’s taking place right now through September 29th. When I say it’s a gigantic fair, I’m not exaggerating one bit! There’s food EVERYWHERE! As a matter of fact, if you’re a foodie – The Big E is where you want to be. There’s carnival rides. There’s games for kids and adults. There’s local businesses and vendors set-up throughout the entire fair. There’s concerts. There’s parades. There’s exhibitions. There’s entertainment GALORE. There’s face painting. There’s everything you can imagine that a fair would have and then some! 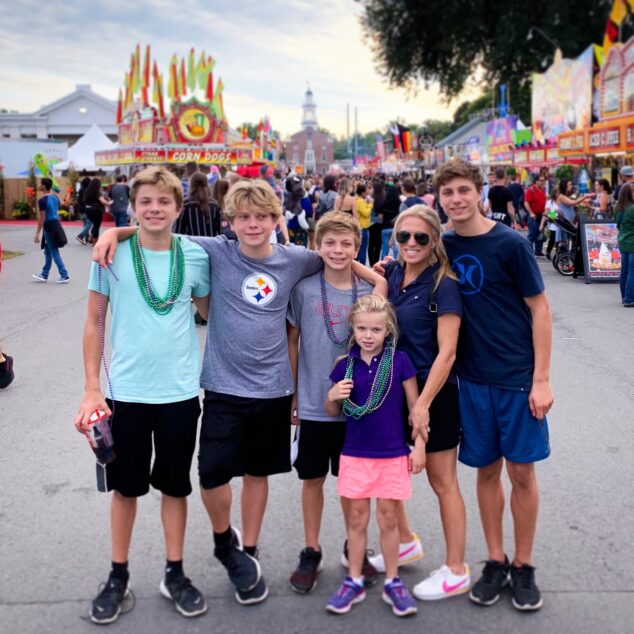 When we parked and walked into The Big E – you could almost hear a collective “WHAT!” from all my kids! They couldn’t believe how big and how awesome and how much fun it was! I know that they were definitely surprised!

We’re big foodies, so when I found out that we were going to get to head to The Big E and experience the food, my heart was full! We experienced the The Big E Fair Foodie Adventure, which is a self-guided culinary tour of The Big E that introduces participants to the newest food offerings at the Fair and more! It was INSANELY AMAZING on every single level possible.

I’m thrilled to take you through the food offerings that we enjoyed while there! I’m telling you – some of these bites had me going up for seconds! They were that kind of good!

Storrowton Soup Shack had Cheeseburger Chowder. Let me say that slowly for you – CHEESEBURGER CHOWDER. It was amazing. I went up for a 2nd bowl at the end! If you’ve never tried it, I highly recommend looking for it when you’re there this year. 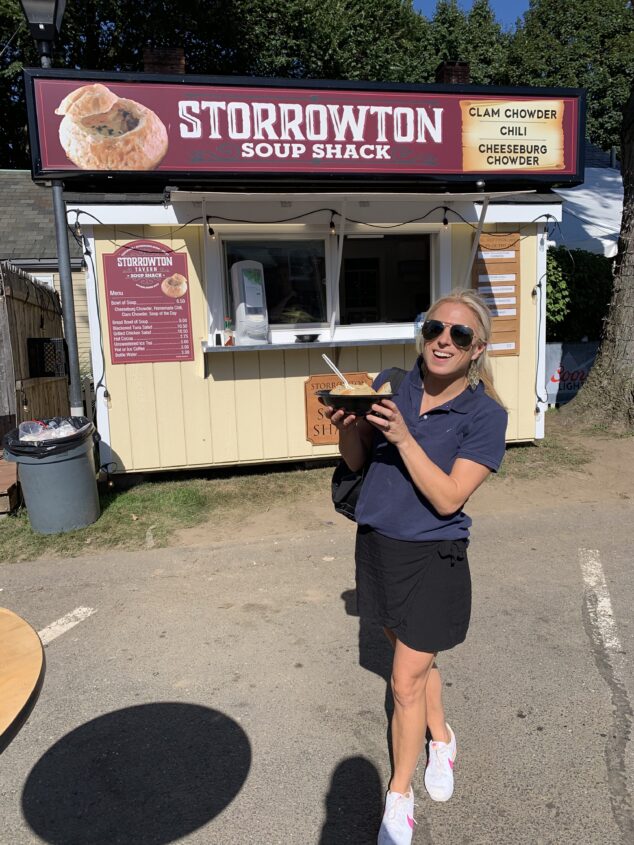 BBQ Split at Porky’s Barbeque! Mashed Potatoes. Cole Slaw. Beef Brisket. All together and yummy as can be! The kids were trying to pry this out of my hand. Victoria loved the mashed potatoes, too. 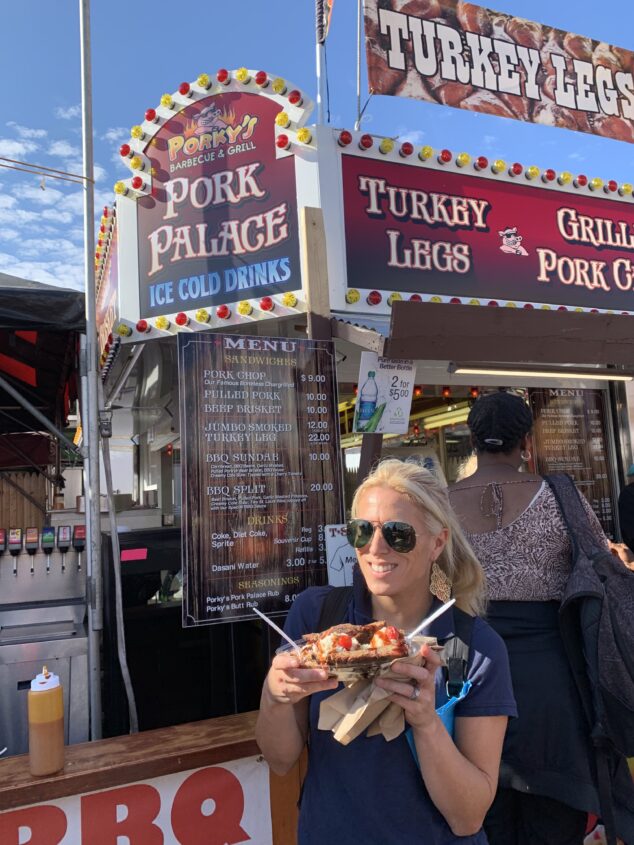 Chocolate Moonshine Co. had the most incredible gourmet chocolates. The set-up was incredible! The offerings and the flavors were amazing.

At Gertrude’s Pretzels I tried a Pretzel Wrapped 10″ Bratwurst on a stick! I’ve never had anything like this before and really loved it! I couldn’t get over the size of it! It was huge and it came with a side of cheese sauce! HELLO! Everything is better with cheese! 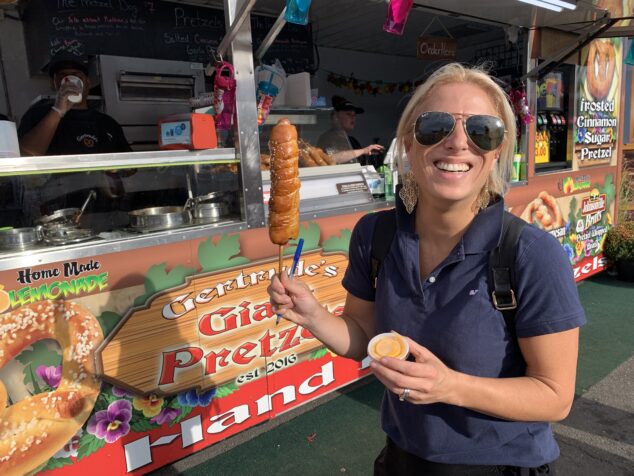 Have you ever had Cheddar Nuggets? I’ve had Chicken Nuggets, but never Cheddar Nuggets! Hot Wisconsin Cheese had the most incredible Cheddar Nuggets. I thought they’d taste just like mozzarella sticks. I was wrong! They were so good and so different from what I expected! 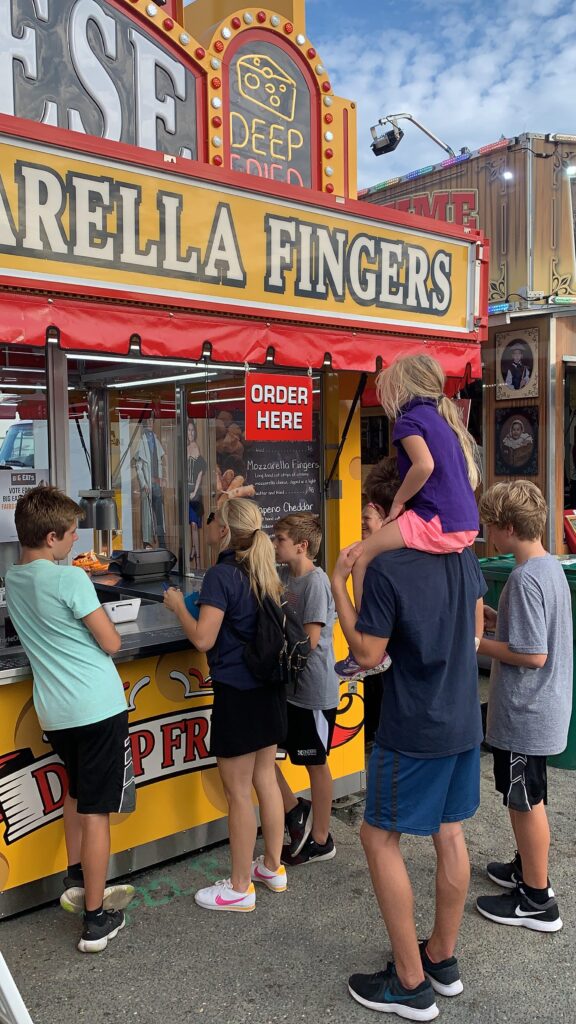 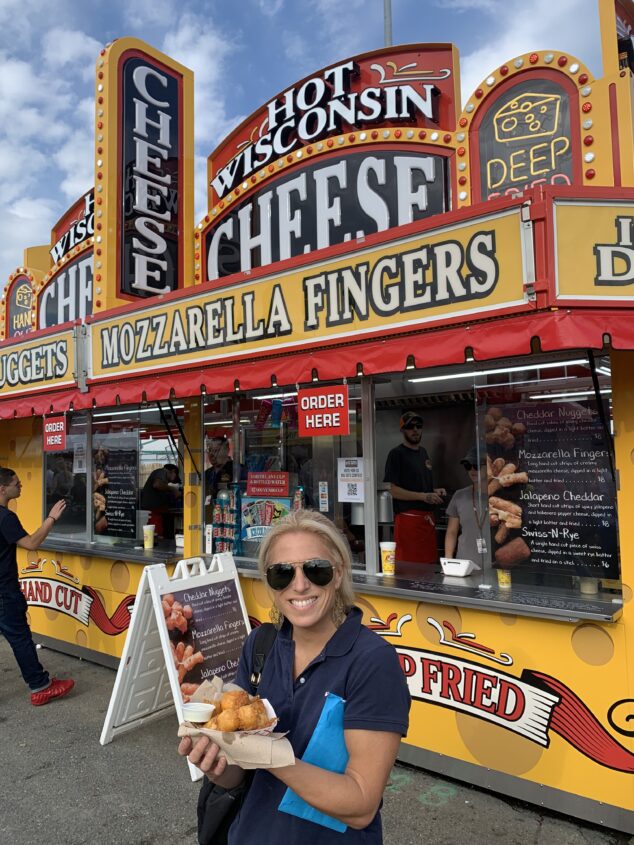 I went for a lighter fare with Noujaim’s Mediterranean Homemade Hummus! I’ve tried to make hummus at home and failed so badly! This one was incredible! It was a perfect snack between bites! 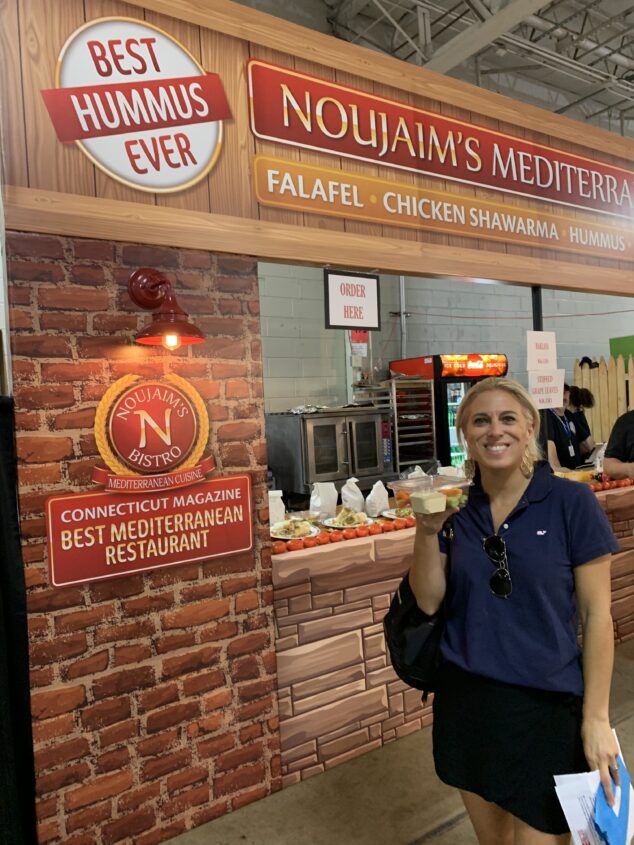 I needed a little dessert! I went to Coffee Break and had Deep Fried Pineapple Upside Down Cake. If you like pineapple this is a no brainer. 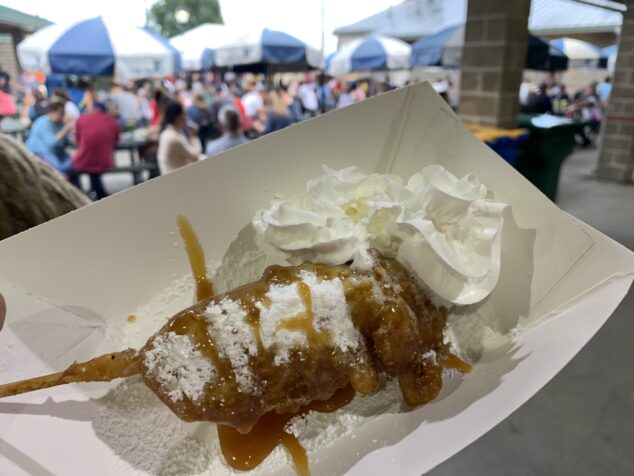 How about this pizza from Rudy’s Pizzeria? Buffalo Mac & Cheese Pizza! If you’re a mac and cheese fan, you will be a mac & cheese pizza fan! My son Henry LOVED this one! 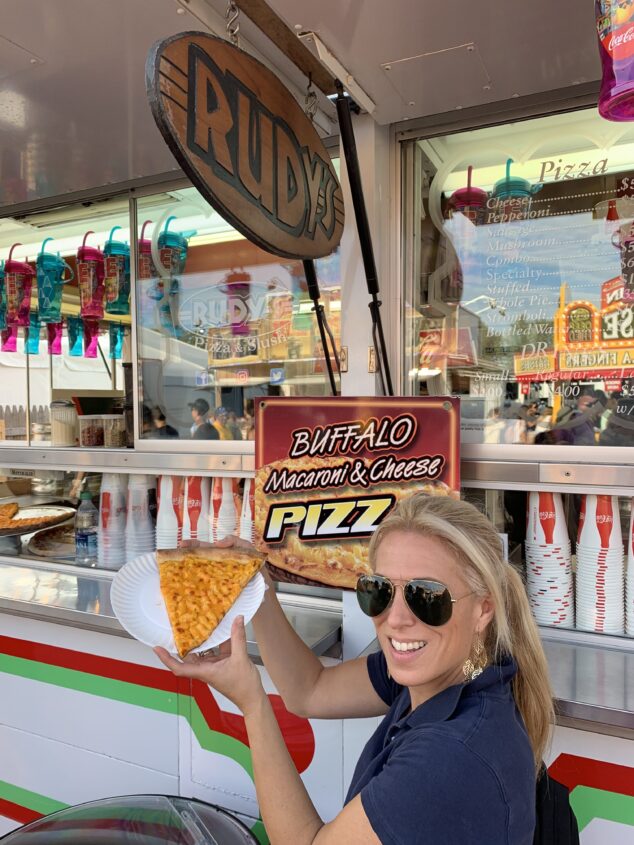 OK, just when I thought I couldn’t fit anymore – I fit something else! Chompers Chicken Bacon and Cheese Choppers with Buffalo Ranch Dipping Sauce. They were so good! The best part is that they serve you a bunch, so everyone was able to feast! 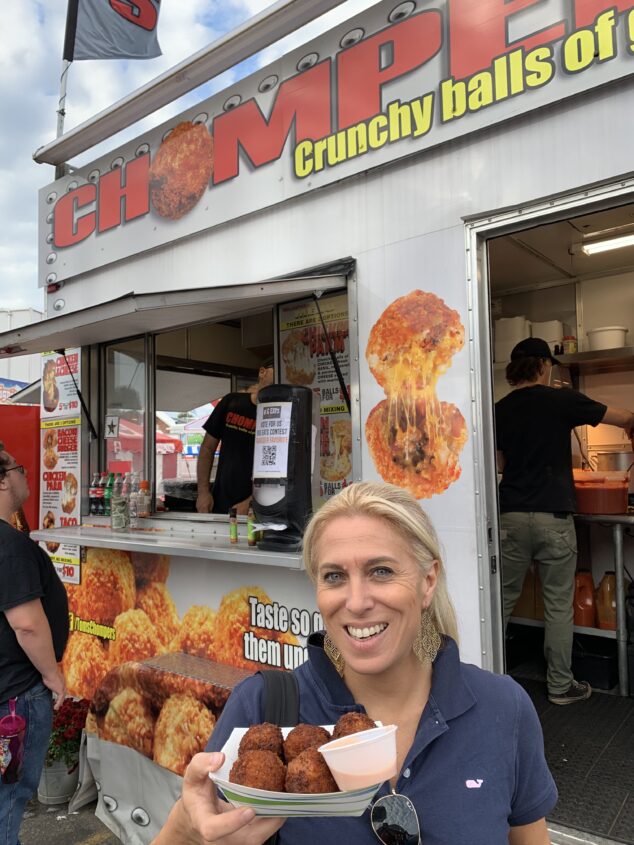 Just when you thought I was done, I’m not! The last stop we made was at The Big E Bakery. We couldn’t fit another thing in our bellies, so I took these treats home with us – 4 eclairs! Funny thing is I tried to get a photo, but my 4 sons each devoured one on the car ride home! 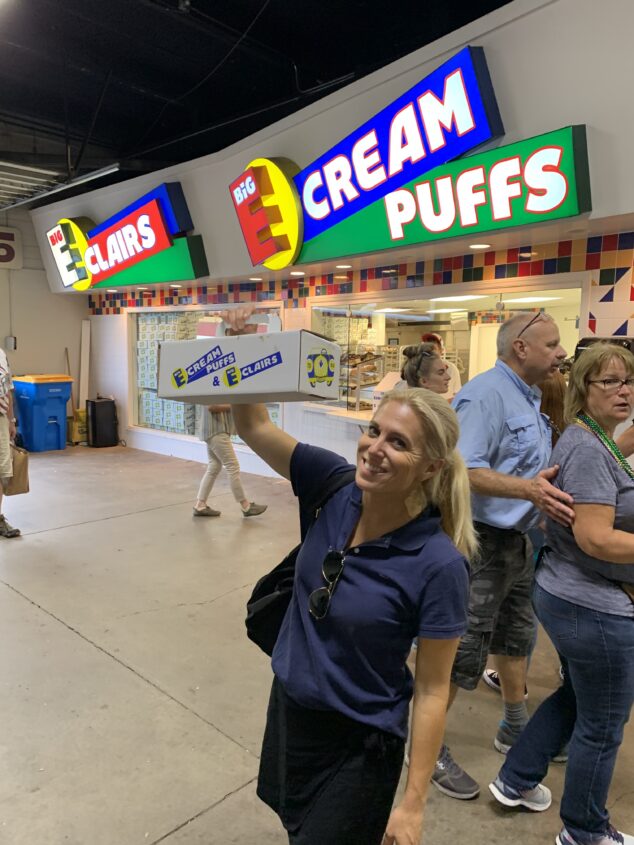 Make The Big E a stop for you and your family. We really had such a fun time walking around and experiencing it all! We loved walking into the different state areas, too! It was so cool to see Rhode Island! 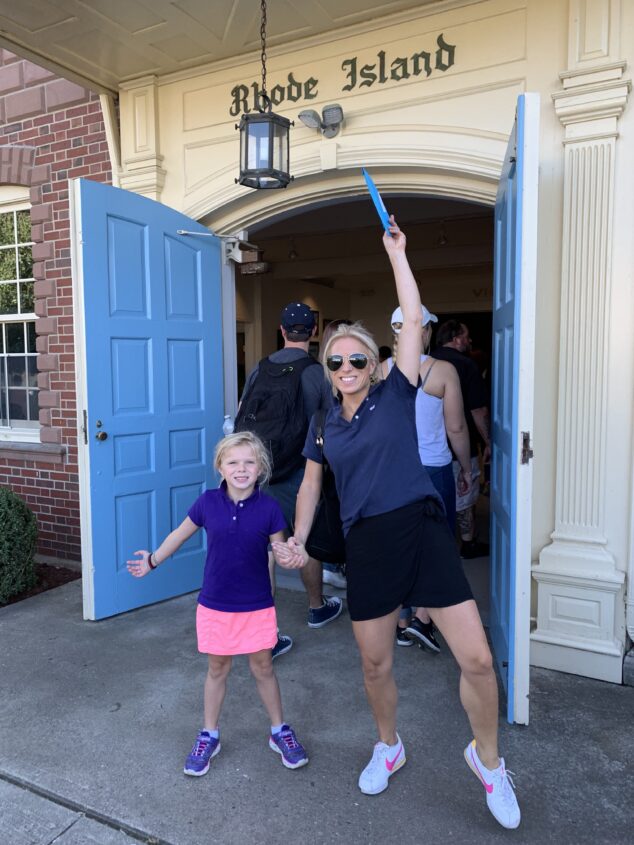 They featured all things that are so iconic to Rhode Island – Del’s Lemonade, Blount’s Seafood, Roger Williams Zoo Pumpkin Spectacular, Warwick Ice Cream, Frog and Toad… all Rhode Island companies that we know and love. We walked through Vermont (saw Maple Syrup!), Maine, New Hampshire and Massachusetts. You can just tell how much time goes into planning this, it’s unreal.

A HUGE thank you to The Big E for having us there for the day! We were there for over 8 hours! We would grab some bites and then go “play” with the kids. We went to rides and played games and went on the gigantic McDonald’s Giant Slide! The boys loved it and would’ve gone down 100 times if they could!

Prices for The Big E:

Experience something new every day of the Fair by aligning your schedule with The Big E’s special and state days. Walk through one of the State Buildings and visit its exhibits or watch the Daily Parade, which honors each day in a special way. Live locally? Be sure to come on the day honoring your city or town and run into friends, neighbors and family!

I hope you enjoy and love The Big E as much as we all did!

See what else is going on during the Fall Season in Massachusetts.