I’m all about sharing new things here about myself when I can. Many of you know me as a mom of 5 who blogs every single day. That’s me, but there’s so much more that I really don’t share here on the blog. I don’t share about what my hopes and dreams were BEFORE I became a “mom blogger.” As you can imagine – when I was in my early 20’s and starting out in the world of WORK, blogging wasn’t something on the radar for me at all. Actually – it wasn’t on the radar for anyone!

RHODE EXTRA: Learn a Few Things About Me You Didn’t Know 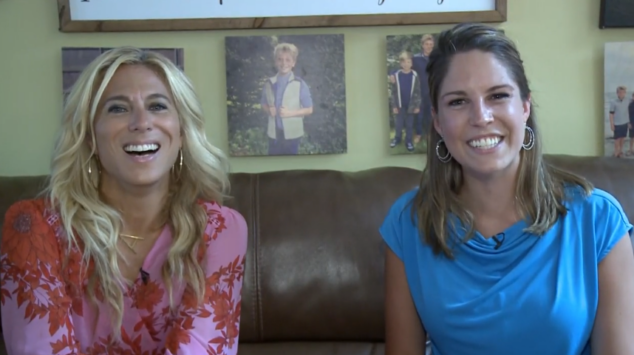 You’ve probably seen me posting a bunch lately about co-hosting on CBS’ The Rhode Show in Providence throughout the summer. It’s something I’ve loved doing and really have felt part of the “team” there on Monday mornings. It’s been a good chance to try something new and different. But here’s the thing that not many people know about me, broadcasting was what I originally tried to get into way back when. So when you see me sharing photos and videos, what you don’t see is that this has been a dream of mine since I was 12 years old. I remember watching Katie Couric and saying to my parents, “That’s what I want to do someday, I want to share and tell stories.”

Life didn’t go as I’d planned when was 12 years old (don’t think I didn’t try!), but the universe had other plans for me.

What I love about this interview with Emily Gibbs is that it’s a piece of my story and it shows what happens when you just let go and have faith in the universe. I truly had a dream and a goal to go into broadcasting, but it just didn’t work out for me when I graduated from Brown. I knew I couldn’t sustain myself in NYC with the money that the entry level broadcasting jobs paid. I actually remember one station saying they could offer me an internship… but it was NO MONEY. As much as I wanted to take it, I just couldn’t. I needed to pay my bills.

My life took a completely didn’t path at that point and that’s OK, it was the way it was supposed to go and I wouldn’t change a thing… not ONE single thing.

I always think these types of things about life:

I have the husband I have because of the path I took.

I have the kids that I have because of the path I took.

I have the life right now that I have because of the path I took.

Life goes the way it should and I love that about life. Jumping into the waters of blogging 12 years ago was the best decision I ever made. It’s afforded me to be home with my kids while pursuing my dreams. I wouldn’t have it any other way right now. I was able to see my 4 little guys grow up and now my little girl. My life is busy and stressful at times with work, but I’m cool with that. I love what I do and I’m proud that I built this and have continued to build this on my own.

My takeaway from this video though is… never give up. Never stop dreaming. I never would’ve thought so many years ago that I would eventually end up on TV, just in a different way. Have faith that there’s a plan. If you’re putting in the work and hustling and trying to do everything you can to push yourself forward, then there will be a rainbow at “the end” of it all. I hope this is just the beginning for me in a few different ventures and I’m open and ready for the possibilities.

And remember this, too. Don’t be afraid to tell people what your dreams are for yourself. If there’s one thing in life I’ve learned is that you never know whose watching, whose reading and whose got their eye on you for something BIG.

RHODE EXTRA: Learn a Few Things About Me You Didn’t Know was last modified: August 20th, 2019 by admin
SHOWHIDE Comments (0)

RHODE EXTRA: Learn a Few Things About Me You Didn’t Know was last modified: August 20th, 2019 by admin