I don’t know about your sons, but my sons always get their haircut mid-summer. Their hair grows like a weed throughout the summer, so I always have to make sure we get a good summer cut half way through! Boys Summer Haircut time is something they used to dread until we started going to Tiffany’s MEN Salon in Rhode Island. 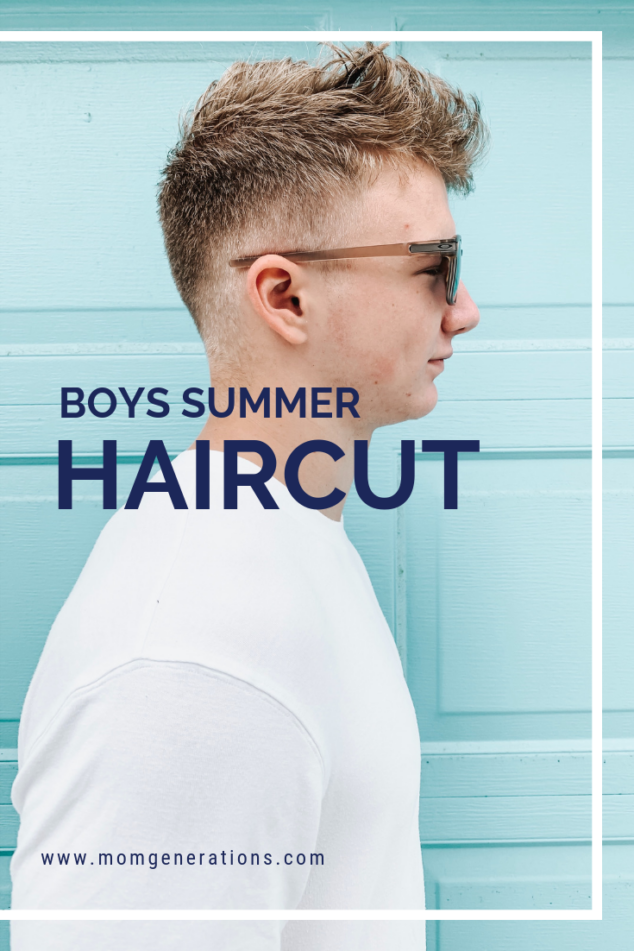 When the boys were younger my husband would takeover and do the boys summer haircut for them. I’m telling you right now, he’s not bad at cutting hair. He’s actually pretty good at cutting boys, so I never felt like he couldn’t do it but the boys just weren’t fans of him cutting away. They definitely wanted someone else to do it, not just dad!

We headed to a local salon in our area that the boys have (literally) fallen in love with for their hair. If you’re local to me and looking for someone to do some boys summer haircut magic on your little ones, head to Tiffany’s MEN! Gentleman’s grooming done right!

The professional stylists and barbers here at Tiffany’s Men’s Salon give more than great men’s haircuts, they also give great advice on men’s style, trends and grooming products. They don’t just offer “the basics” for men. Whether you need a cut or a quick color rejuvenation, they give you that extra bit of confidence that comes with looking your best.

As always we captured the boys getting their most recent boys summer haircut of 2019! They are so funny in this video and I love that I have so many of them to watch and enjoy as they’ve gotten older. Here’s the latest one from the McClelland boys!

There are 5 Things They Love about Tiffany’s MEN Salon: 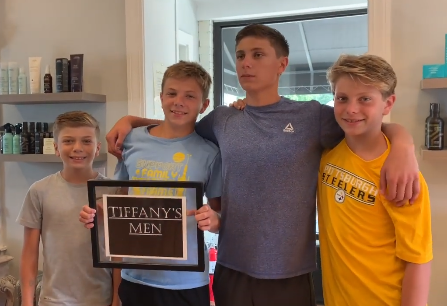 1. The shampoo with a head massage. This is probably hands down their most fave part of Tiffany’s! At home when they’re showering I’m usually outside the bathroom screaming, “Come on… hurry up!” So there’s really no time to be relaxing or enjoying the shower. It’s usually all about, get in and get out so they next boy can hop in!

2. The stylists actually do what they want. I know that I’ve had this happen to me before with my own hair, but it’s not so different for boys, too. My sons LOVE that they actually do the style they want them to do. My guys are big on not having too much hair cut off, they’ve had their hair butchered off at various places in the past and they leave hating their hair. Even though boys can grow their hair back in just weeks, it still stinks. They love that they don’t have that issue here.

3. The stylists are super, duper patient with them. I know my sons don’t know the number blade that they use for the buzzing portion of their cuts. Every single time the stylist always patiently explain exactly what it is that they do and I appreciate that, too. It’s something that I know is important for them to know, but they’re young right now and I just love that they walk through it with them every single time.

4. They love that there’s water there for them to drink! I’m not kidding, my son Henry think it’s the coolest thing that there’s snacks and drinks there for him. I think it’s adorable that something so simple leaves such a big impression, but it does. He just loves that he can enjoy some treats while he’s waiting to go or waiting for his brothers to finish up!

5. There’s lollipops at the end. You can’t beat that, right? It’s something that (again) is so simple, yet is so important for them. They know that they will get a nice little treat at the end and I think that’s adorable! You can’t beat a lollipop sometimes! I know that my daughter gets so excited about grabbing one after her haircut, too at our salon.

Make sure you take some time to get that boys summer haircut for the little guys in your life! It’s something that I know my kids now (at least) look forward to every month or so. My guys have really thick hair, so it’s something that I’m always worried about when it’s haircut time, but when you find a place that knows how to cut – you don’t have to worry!

Also – my sons all have cowlicks! If you’re not familiar, a cowlick is a section of hair that stands straight up or lies at an angle at odds with the style in which the rest of an individual’s hair is worn. Cowlicks appear when the growth direction of the hair forms in the spiral pattern. It’s something that Henry and Alex really have defined ones on their heads. It’s also vital to make sure you have a stylist that knows how to cut these.

I’m embarrassed to admit this, but I just thought you could chop chop on those and I was wrong wrong! I completely messed up Henry’s a couple of years ago and I felt so bad! It looked crazy after I did it and I immediately knew I shouldn’t have done it! Make sure you’re keyed into whatever kind of hair patterns or issues that your kids might have!

Check out some of my other posts about Tiffany’s MEN and haircuts at home:

Family Haircut Time for the 5 Boys

Haircuts at Home (Help Us ALL)

Also make sure you head to our YouTube channel to see our haircut videos! For some reason we do really well with an audience with all of our hair videos on YouTube! Love for you to take a look and tell me what you think! We love making the videos, so love seeing what people think about them!

Head on over to YouTube.com/MomGenerations and become a subscriber! We love having lots of people watching out videos and appreciate any kind of love you can give us over there!