We spent the Easter holiday in Pittsburgh visiting my in-laws. It’s become a tradition that we look forward to every single year. One thing we love about heading there is that because the weather is on the warmer side, we can get outside and enjoy Pittsburgh. The kids were dying to head to a Pittsburgh Pirates Game, so my mother in law bought everyone tickets and off we went! It was so much fun and even though we’re diehard Red Sox fans, it was still fun to be in Pittsburgh at PNC Park enjoying a game under the nights!

Pittsburgh was playing San Francisco the night we went! We were hoping for a dry game, but the weather didn’t cooperate. It was warm, but it was wet. The rain was coming down fast, but it didn’t stop us at all! The boys were actually hoping it was going to keep raining, I was just hoping we’d have tickets under a covering! Thank goodness we did! The field was gorgeous! I’ve only gone to a Pittsburgh Pirates Game one other time with my husband. I had forgotten how beautiful the field was and the entire complex! 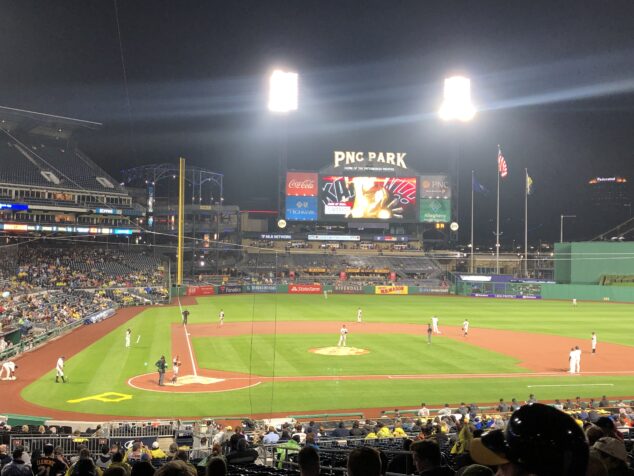 The best part of the night was being there with cousins! My daughter is in love with her cousins (who are the same age as her), so she had a blast from the second we got there until the second we left! She laughed. She played. She danced. She ate yummy baseball park food. She sang. She literally had the best night of her little life! She was so cute watching with cousins because they were all really getting into it. They didn’t know what was going on, but they definitely seemed like they did! 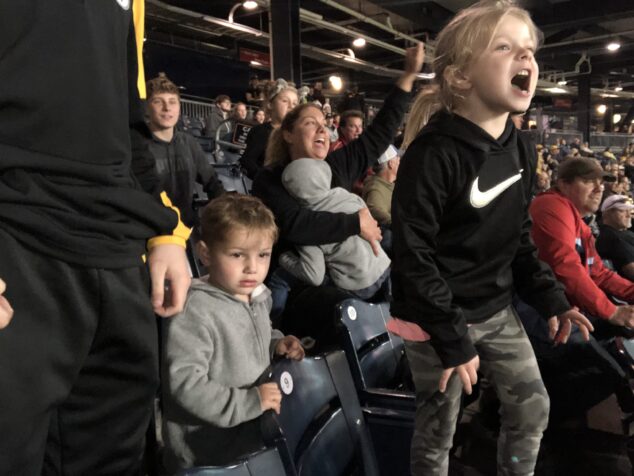 The Pittsburgh Pirates are an American professional baseball team based in Pittsburgh, Pennsylvania. The Pirates compete in Major League Baseball (MLB) as a member club of the National League (NL) Central division. The Pirates play their home games at PNC Park; the team previously played at Forbes Field and Three Rivers Stadium, the latter of which was named after its location near the confluence of the Allegheny, Monongahela, and Ohio Rivers. Founded on October 15, 1881 as Allegheny, the franchise has won five World Series championships. The Pirates are also often referred to as the “Bucs” or the “Buccos” (derived from buccaneer, a synonym for pirate).

We definitely got into the Buc spirit at the game! My kids were really into it – enjoying all the different aspects of the game! The best part for me was watching my sons sing with their arms around each other to the song, “Take Me Out To The Ballgame!” It not only made me smile, it actually brought a tear to my eyes. They were really cute just happy to be together and I loved how they got into it with each other. It was a nice thing for a mom to see! 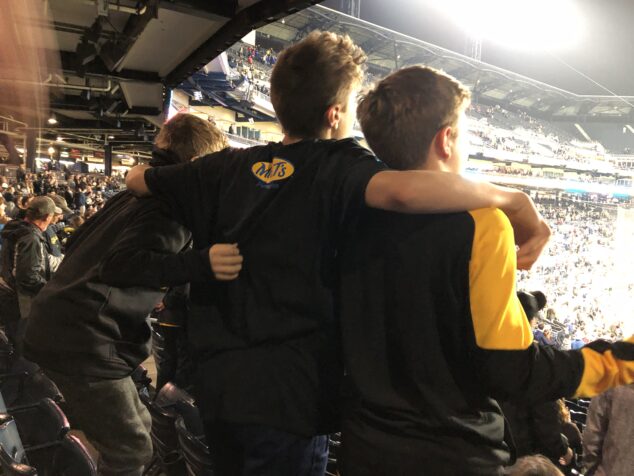 I love to be able to capture experiences with our family, so my husband video’d our trip to the game! As you can tell the rain was coming down, but it didn’t stop us from going to the Pittsburgh Pirates Game! We were all excited and ready to enjoy the full game! And let it be known we didn’t leave until 10:30PM! The kids were having too much fun!!

How can you get tickets to a Pittsburgh Pirates Game?

Get your tickets now for all games including Free Shirt Fridays, Kids Days, Bobblehead Games, Zambelli Fireworks Nights and more at MLB.com! They have different theme nights, too which are fun for kids to go to! We happened to go on free tee night! So everyone that went to the game (or the first 20,000 people) got free tee shirts! They actually were pretty cool tees, too! When I went onto the site to see about the different types of games there were a ton more, too! This would be a great way to gauge if it’s a game you would like to attend!

HUGE shout out to my inlaws, especially my mother in law! She bought everyone tickets and treated the kids to popcorn and pretzels and hot dogs (they have $1 dogs!). It’s not cheap taking a family to a game, but I have to say – if you ask about different discounts you might qualify. My father in law is a veteran, so he had a special discount. My mother in law has a special local grocery store membership card which qualified her for a special discount, too. We got each ticket for $10! That’s right – $10! We were 4 hours of fun for $10 each at a landmark event in the City! 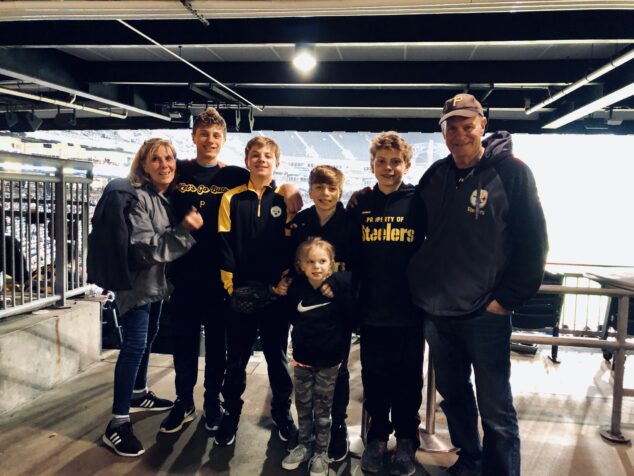 My advice for heading to a Pittsburgh Pirates Game (or any other baseball game):

2. Make sure you save your water bottles or soda bottles or cups after you finish. There are water fountains all over the place, so you can refill up for free!

3. Wear comfortable shoes! You’re walking far to get to your seats and also back to the parking lot. You want to make sure you feet can keep up, so make sure you have something super duper comfy on your feet!

4. If it looks like it’s going to rain, but a cheap poncho at a dollar store somewhere. They are expensive at the stadiums. You don’t want to spend money on something you could get super cheap!

5. My advice? Wear something that shows your fandom! My sons love Pittsburgh, so I had them wear some black and gold! It’s nice to “fit” in with your fellow fans!

As you can tell – we had a great time at the Pittsburgh Pirates Game!! We will do it every year now when we head there for the Easter holiday!

If you’re a family involved in Little League, enjoy this fun post about What to Wear to a Baseball Game!