Hemangioma was a word I didn’t know well at all before July 9, 2013. Actually – I’m going to be honest with you – I didn’t even know how to say it properly! My beautiful Victoria was born with a hemangioma on the left side of her forehead.  I knew immediately that there was a pinkish/red mark there, but the nurse and doctor told me it might just be a bruise from birth and to wait a few days and see. Victoria was born via c-section and right after birth, as much as I was out of it from the medication, I do remember 2 nurses talking about the mark on her head. I actually remember feeling an instant twinge of nerves in my belly. What did they mean? Were they nervous? Was this normal? It scared me and I was actually thankful that they were on top of it.

The little “mark” (as I was calling it) on her forehead never went away. It actually remained right there on her beautiful little head. It wasn’t changing in size at that point. It definitely was not getting any bigger because I was focused on it like crazy. It also wasn’t getting any darker – just remaining the same. On our 4th day of being in the hospital while I was recovering one of the pediatrician’s mentioned to me that she felt Victoria’s mark on her heard was a, “Hemangioma.” A WHAT? A hemangioma? Honestly – the ONLY other time I had heard the word (which I couldn’t say) was when a close family friend mentioned their daughter has been born with one. I just remember them letting me know that that was what the red mark on her head was when their daughter was first born. I didn’t think much of it, but now it was personal. My daughter had one and it worried me. I immediately went to google (which I shouldn’t have done) to see what I could find out about everything related to hemangiomas. OH. MY. GOD. Please – if you’re reading this and your child has one, do not google. As much as you might want to google what they are… please don’t do it. It will ONLY add worry to your plate. Hemangioma growth progression and regression is something you really don’t want to read about when your child is 1st diagnosed with one. There is a ton of information out there, but it really put a ton of fear within me. And I’m sure you can agree – even though you want to know as much as you can – you want to know the proper information.

Over the next 2 months Victoria’s hemangioma went from being the size of a dime to that of a quarter and what really scared me was that it started to get darker and darker. I was also worried about it getting hurt. I treated Victoria like she was a glass bowl! I was terrified to have ANYONE touch it. As I started sharing more and more photos and started sharing our story more and more, I had more and more people reach out to me giving me their stories. Thankfully we have an amazing family doctor and his best advice was to meet with a pediatric dermatologist. I immediately started asking around for the BEST pediatric dermatologist in the Rhode Island area and was sent a few different numbers. I was able to get an appointment pretty quickly because Victoria was so little and hemangiomas take precedent. We ended up choosing one and took her in for an appointment in September of 2013… Victoria was 2 1/2 months at this point.

She was tiny as can be and the most precious little baby in the world to me. As I brought her into the office – the nurse there looked at her and started taking a look at her hemangioma. I had started calling it at that point a strawberry hemangioma or cherry hemangioma because it was that dark. But she looked at Victoria and said, “You’re a beautiful little girl, but once we’re done with you – you’ll be gorgeous.” 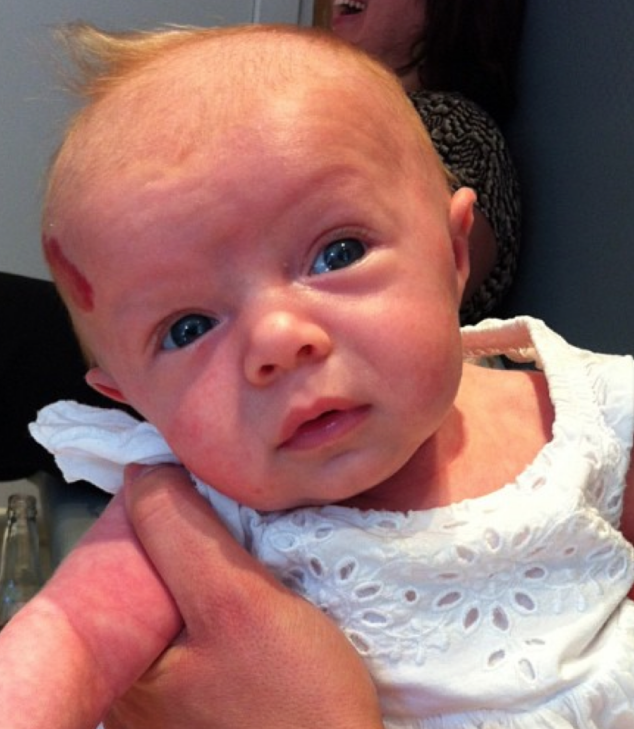 In those split seconds, I crumbled. WHAT? I started to cry right there in the office. I couldn’t believe that she had said that to Victoria. In my eyes she was gorgeous … regardless of the hemangioma or not… she’s my beautiful and gorgeous little girl. When the doctor came in, he suggested putting Victoria on a medication called propranolol. I remember him telling me that it needed to be started ASAP because the sooner you start it, the better. I was terrified of his because she was so little and putting a beta blocker drug in her body scared me. 5 years ago there wasn’t much research around this drug treating hemangiomas and I didn’t know many people who had used it, so my gut said no.

I knew there were a few ways to treat one at this point after talking to my family doctor (who from the start suggested doing nothing since it wasn’t doing any damage to any of her senses).

I ended up leaving the doctor’s office feeling defeated and at square 1 again. I didn’t know what to do and I didn’t know how to go about finding the best advice to treat Victoria’s hemangioma. The universe (I believe) intervened at this moment. I had a personal friend reach out and tell me about a fantastic doctor she had gone to for her daughter in Boston at Boston Children’s Hospital named Dr. Greene. She really spoke highly of him and said that he was the best and specialized in hemangiomas. I was lucky enough to get an appointment pretty quickly and we went to see him in October of 2013. He was our gift! I’m going to be very honest with you right here. Victoria’s hemangioma was definitely big, I mean – anyone that looked at her saw it. I can’t tell you how many people made comments and asked us questions about it. But when I went to Dr. Greene’s office, I realized how lucky we were. Victoria’s was small compared to some of the babies we saw and met. I suddenly felt silly being there and I even expressed this to Dr. Greene at our first visit. He told me that every parent has the right to get something checked out on their child that they’re nervous or scared about and I was immediately at ease with him. His advice for us? Do. Nothing. He suggested that we keep watching it. See if it gets much bigger. See if the color keeps changing. He explained the entire progression and regression life of hemangiomas to me and really expressed that he’s there for anything, anytime.

We ended up going to visit Dr. Greene every 2 months for Victoria’s 1st year of life. We had a bit of trouble in December of 2013 with Victoria’s hemangioma when it developed 2 ulcers that started to make it bleed. When hemangiomas bleed, they BLEED. 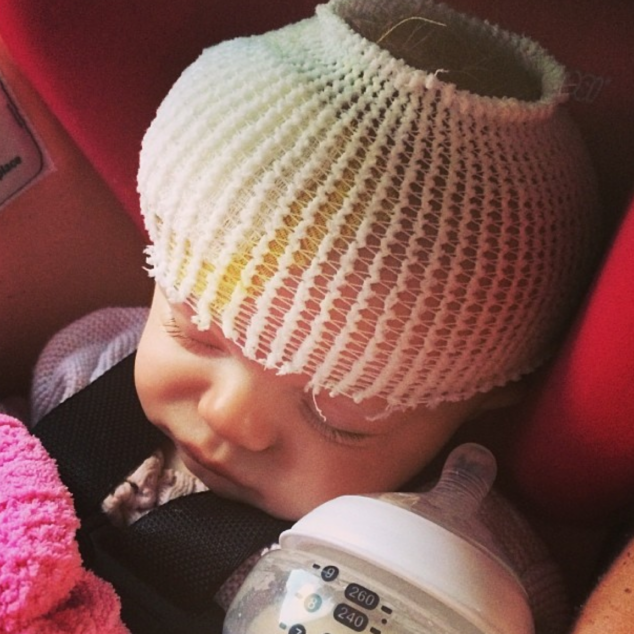 This was the most terrifying thing of all to me. But Dr. Greene and his office staff were there for me. They even let me email photos over the holiday so they could see how it was doing. I felt like I could breathe and it felt good to know someone had Victoria’s back. 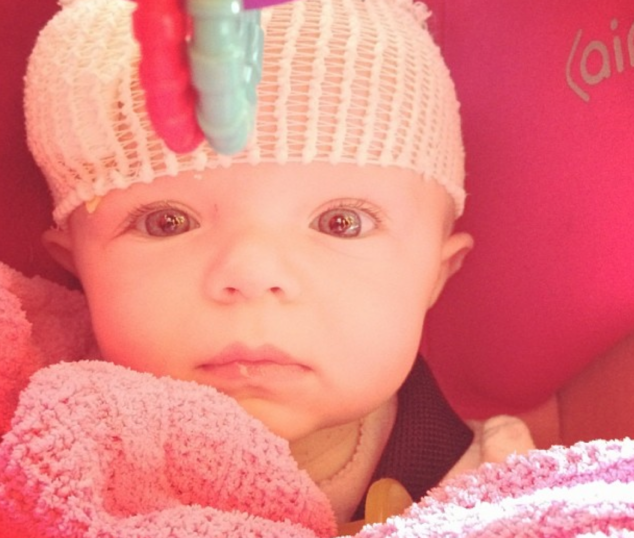 A hemangioma is a benign (noncancerous) tumor made up of blood vessels. There are many types of hemangiomas, and they can occur throughout the body, including in skin, muscle, bone, and internal organs. Most hemangiomas occur on the surface of the skin or just beneath it. They often develop on the face and neck, and can vary greatly in color, shape, and size.

Our hemangioma story was personal to us and I know that there each story is different. But. And this is a big but. I wanted to share my story for others because I hope it helps. Everything Dr. Greene and my personal family doctor told me, came true. I was terrified of what was wrong with Victoria because I knew so little and everything I was reading scared me. I’m here to tell you that you don’t need to be scared alone. There are so many others out there feeling the same way. Talk to experts. Talk to people who have gone through it. Listen and share stories. 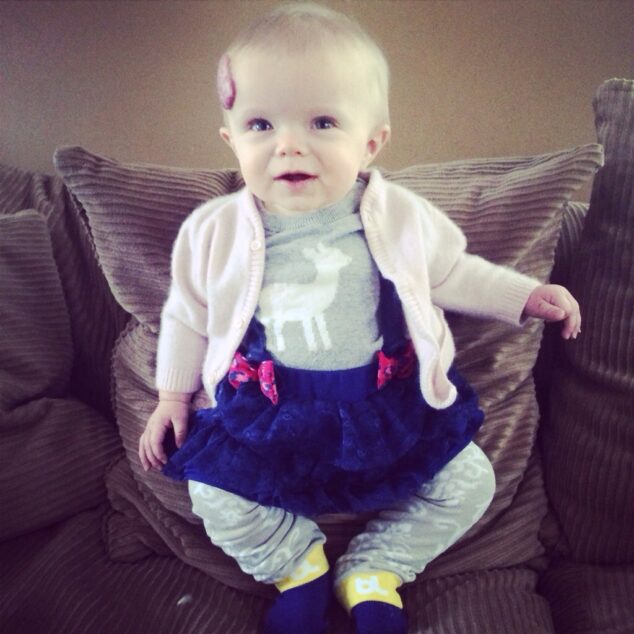 I decided to start sharing Victoria’s hemangioma growth progression and regression early on the blog. There were 3 things that really made me what to do it: 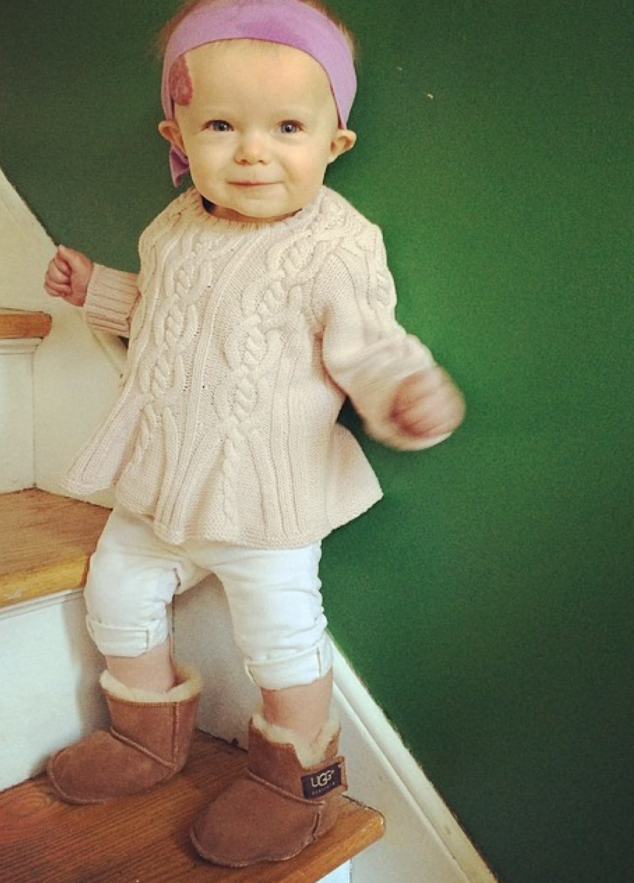 1. I needed to share our story because there weren’t many moms at that time doing so on blogs. I would find forums and chat rooms, but there wasn’t any follow-up. A mom would pour out the details and her fears… and then that was it. I wanted to know her story, what happened, how did it go??? I thought it would be a good place for me to be open, honest and real and raw about our journey.

2. I wanted Victoria to have this chronicled for herself. She may not care that I did it, or she may be thankful that I did. Either way… I wanted her to know that we did everything we could to make sure it was taken care of and followed up. When she was a baby it was very apparent that she had one, it’s regressed tremendously over the last 5 years… but those early years, there’s not one photo where you can’t see her without it. I want her to have this story of the beginning.

3. I wanted to other moms and dads going through this to not feel alone. I felt very alone that first full year and only had a handful of people to call and talk to about it. I wanted to be someone’s deep breath, to know that all will be fine… and that what you’re feeling is normal.

I just wanted it to help 1 person.

I can fast forward to present day. Victoria is 5 1/2 years old. Her hemangioma is still slightly visible on her head, but it regressed tremendously. I remember not believing ANYONE who told me it would. I actually remember thinking that it would never change and it did.

I also want to share a bunch of videos below for you. I created these throughout the last 5 1/2 years. Some of them are very raw. Some of them are quick little updates. I started filming more as a marker for Victoria someday, so she would know her own hemangioma story. Her strawberry hemangioma or cherry hemangioma will be hers to share, not always mine. And I wanted her to have a story from the beginning.

I’m passionate about sharing this information, so please never be afraid to reach out to me and ask me anything. I’m here. I always will be.

Check out our stories throughout the years here.

Hemangioma Birthmark on your Child was last modified: January 14th, 2019 by admin