Meet Scout, a Rideamals toy from Kid Trax, a childs new play pal! This adorable pony pal combines battery-powered ride-on toy fun with real interactive play, thanks to fully motorized eyes, ears, head, and wheels. Kids can hear munching noises as they feed Scout a tasty treat, watch the ponys ears move as they brush its mane, take Scout for a walk, and, of course, ride Scout! Children can go for a musical pony ride with two forward speed settings and one reverse speed; Scout can travel at up to four miles an hourall while songs or pony sounds play in the background. 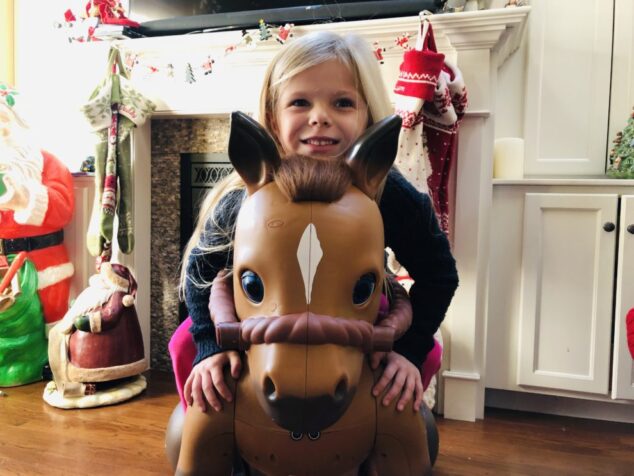 Scout a Rideamals by Kid Trax comes with a grooming brush, carrot, apple and saddlebag. Scout also comes with a rechargeable 12-volt battery and charger and is easy to recharge with the One Step Direct Connect charging system. Rideamals Barn Play Tent and Pony Show Accessory Kit sold separately. With over 100 unique sounds and movements, including a special dance, Scout will create magical memories for your family. 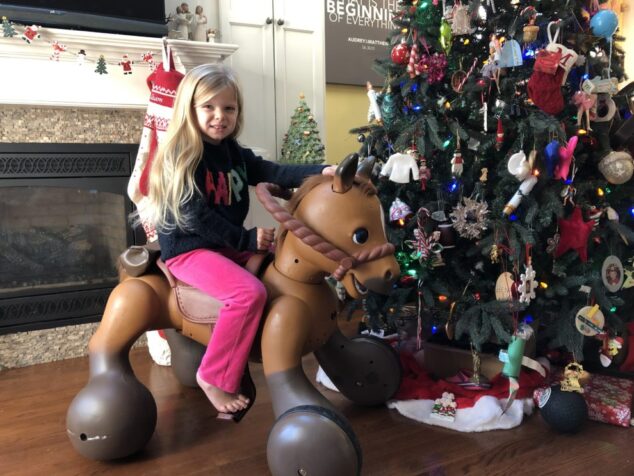 But why talk about Scout when you can see Scout in action!

– 12-Volt Rideamals Scout Pony Interactive Ride-On Toy by Kid Trax:
– Over 100 unique sounds and movements ensure that every playtime is different from the last.
– Fully motorized eyes, ears, head and wheels make Scout come to life!
– Interactive fun for boys and girls: Feed it, brush it, pet it, walk it, ride it or dance with Scout. Over 100 unique sounds and movements.
– Includes: Brush, apple, carrot, saddlebag, 12-volt rechargeable battery and wall charger
– Power Trax Rubber Traction Strip Tires keep the ride smooth and steady
– One Step Direct Connect Charging System makes it easy to keep the fun going
– Walk or Ride: Scout can trot (3.5 MPH), gallop (4 MPH) or go backward (3.5 MPH). Sit in the saddle, hold the reins, pick your speed and you’re on your way!
– Feed or Groom: Kids can hear munching noises as they feed Scout a tasty treat. Scout’s ears move when its mane is brushed.
– Pet and Hug: Scout will respond with different movements and sounds when you pet its nose and cheeks.
– Walk: Pull the reins in front of the head and press the button to get Scout to trot along behind you.
– Dance: Press the horseshoe button and Scout will prance with you! Just make sure you’re standing in front of Scout to see the awesome moves.

All you need to do is head over to Instsgram and comment on my image! I’ll make it super duper easy for you – here’s the link. CLICK HERE to head over to enter!

Winner will be chosen on Thursday – December 20th!!!