Early last Tuesday morning, I was at Audrey and Matt’s house to get their 5 kids breakfasted (is this a word?) and off to school while the parents had business to attend to.

The two older guys, grades 6 and 7, are rather self-sufficient and ate, geared for school and headed to the bus stop in no time at all.

The younger three – Ben (grade 5), Henry (grade 4) and Victoria (pre-school) – had time for a little treat at Dunkin’ Donuts before school. So off we went.

We were lucky to get a nice corner table where we could enjoy each other and some good conversation. These are the grandparent moments that I cherish, everyone sitting and chatting and laughing and eating things only grandparents allow on school mornings and drinking chocolate milk, to boot!

Henry was excited about a group project that he was working on at school, one that required that a student-designed car actually accelerate. He was so, so very excited that his partner was bringing a balloon to school that day, one that they were going to blow up, then attach to a straw that would accelerate the car that they had carefully designed.

The excitement in Henry’s eyes and voice and hands – at that tiny moment in time – as he described the automobile project, was better than Christmas morning magic to me.

(As a retired teacher, I only hope that I had inspired this enthusiasm in a student!)

Henry wasn’t deterred, but I could almost see that question sneak into his mind.

But Ben was already one step ahead. “Grandma,” he asked, “do you think CVS sells balloons? We have time to stop there before school. Just in case.”

(I wanted to hug Ben with his brotherly love. Wait, I did!)

Henry was all aboard with this suggestion, so Ben, Henry, Victoria and I packed up the chocolate milk and half-eaten donuts and took off for the local CVS.

We had a 5-minute wait for CVS to open, but our excitement at this back-up plan sustained us all. Even 4-year old Victoria was all-in!

Once inside, we headed to the “birthday” section, if you will, where cards, streamers, cups, plates, ribbons, etc. are sold.

Ben ran to a saleswoman to ask about balloons. She said that CVS no longer carries latex balloon, but rather helium balloons. Henry asked if a helium balloon would work on the experiment that he explained in a nutshell.

Nope. (But a good side lesson in “air” acceleration, just the same, for a 4th grader.)

She offered that perhaps the bookstore across the plaza may sell balloons.

Then Ben spotted Shaw’s Supermarket at the very far end of the plaza, so we piled into my car and drove there, stopped, hopped out, ran to the door and entered into the Produce department. I think we were the only 4 people in the entire store, but we did spot a man in a Shaw’s jacket stacking fruit.

We ran to him and I quickly asked in which aisle latex balloons would be.

He offered that there were lots of helium balloons already filled in the Florist department, but I quickly explained that my grandson needed a latex balloon.

He kindly brought us to a woman who would know about things such as balloons (as I checked the clock because the boys’ school start time is 8:40 at the latest.)

The very kind woman who did know such things brought us up and down two “decorations” kinds of aisles and, no, there were no latex balloons.

STUMPED, we began to walk to the store’s exit. But I was too invested by then in this balloon for this grandchild who was so excited about this school project and the brother who wanted his brother to have a spare balloon just in case his partner forgot to bring one to school and the sister who was SO excited to find a balloon for Henry… that I told the kids to run with me to the Florist department.

And there, like magic, like some angel or mythical being or fairy-tale hero or leprechaun or halcyon was following the path of our adventure, a vision appeared from behind the gorgeousness of the dancing and smiling helium balloons – 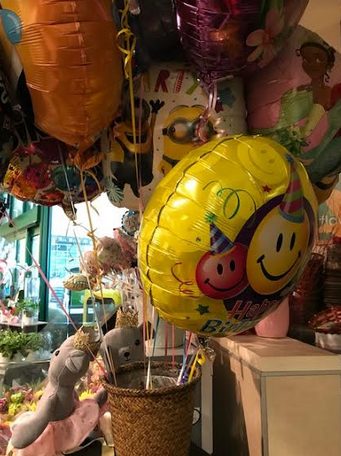 … almost hiding, careful to make our Party-of-4 truly appreciate the GIFT we were about to receive, if we looked closely enough and truly believed! 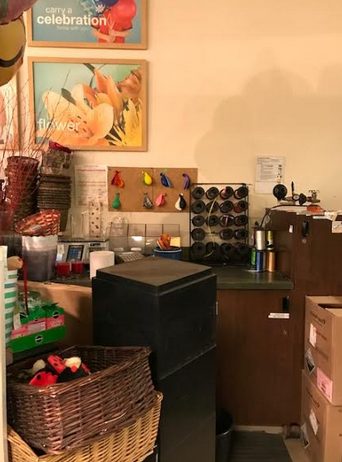 A Rainbow of Colors tacked to a corkboard – Latex Balloons –

Latex Balloons waiting for a boy who truly needed and wanted one and a brother who wanted his brother to have one and a sister who squeaked with delight at the discovery like we were miners of gold and a Grandma who understands the power of one Tiny Moment of excited conversation turned into Major Memory unfolding like true, true magic before my very eyes.

Ben looked around to find someone to retrieve the magic and the Produce guy came with a smile at Ben’s enthusiasm. He was very happy with our discovery of the tucked-out-of-sight latex balloons and asked Henry what color balloon he wanted.

Henry chose a black balloon because the car he and his partner had designed was black and he thought that would be cool.

I pulled out my wallet, but the now-Balloon Man handed Henry an un-inflated black balloon, but truly passed along the pot of gold at the end of the rainbow to us travelers on our morning quest. He waved my money away and just smiled.

The Treasure. The Boy – 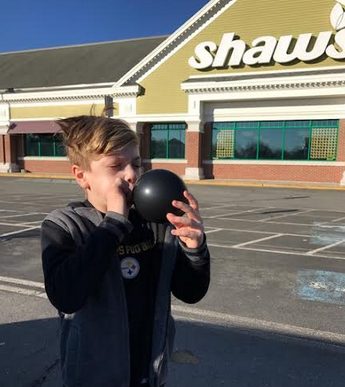 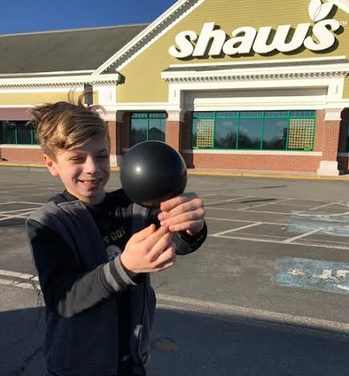 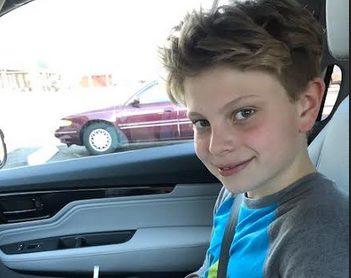 If my heart could have been photographed, it would be too big to fit on this page.

This journey of a tiny moment of conversation about a balloon turned into a major memory for each of us – forever.

I got the kids to school in the nick-of-time.

Henry and his partner each brought a balloon to school.

They would need 2 balloons to complete the automobile acceleration project.

The project was a great success!