The Toy of the Year (TOTY) Awards recognizes the top toys of this holiday season and I’m THRILLED to be partnering with them AGAIN this year!!!!!

The TOTY Awards are frequently referred to as the “Oscars” of the industry, which is awesome because it gives parents the opportunity to see what’s HOT for the NEW YEAR AHEAD!! On November 3, 2017, the finalists were unveiled and voting began, so you still have plenty of time to head over and cast your vote! The TOTY 2018 voting process includes input from not only consumers, but also members of the Association, retailers, journalists, bloggers and academics. Voting closes Friday, January 5, 2018 and the winners will be announced during a celebration in New York on February 16th!

Are you ready to check out the Best Playset of the Year NOMINEES??

With 5 kids, I can tell you without hesitation… PLAYSETS are a BIG DEAL IN OUR HOUSE!! My favorite is that with Playsets it’s hours (and hours) of independent play! Kids love to be able to build and create and play on their own and with the “right” Playsets, they can do JUST this! 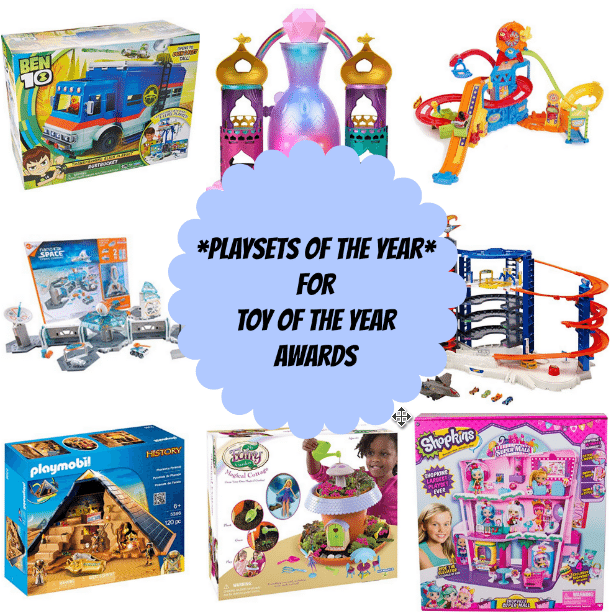 And – of course – we had some fun at home unveiling them, too!!

For information about the Toy of the Year Awards and where to go to VOTE, click here.

Toy of the Year Nominees: Best Playset of the Year REVEALED!! was last modified: April 23rd, 2018 by admin
SHOWHIDE Comments (0)

Toy of the Year Nominees: Best Playset of the Year REVEALED!! was last modified: April 23rd, 2018 by admin