*The post is in partnership with Universal Pictures Home Entertainment

I don’t know about you, but my kids are GIGANTIC Despicable Me FANS!

I mean, HUGE FANS! For Christmas last year “Santa” brought a ton of Minion stuffed animals to our house! The kids went crazy when they saw them! They were SUPER EXCITED!

This year my parents brought the kids on June 30th to see Despicable Me 3 in the theaters! I know this because June 30th is my anniversary and my parents were babysitting! The kids BEGGED them to go and my parents (being the best grandparents in the world!) brought them! My parents LOVED IT!

Well… my kids are SUPER EXCITED for the news that Despicable Me 3 Special Edition is available on Digital November 21st, Blu-ray & DVD December 5th! 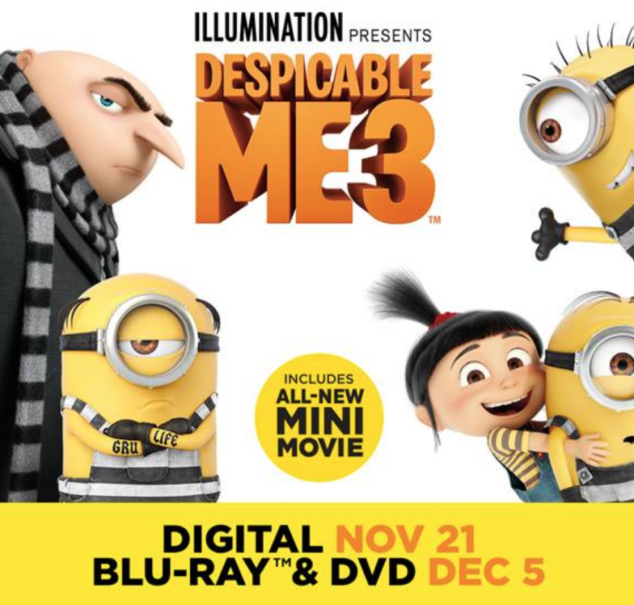 For those of you not familiar Despicable Me 3… Illumination, the studio that brought you Sing, The Secret Life of Pets and the Despicable Me franchise, continues the adventures of Gru and his family in Despicable Me 3. After he is fired from the Anti-Villain League for failing to take down Balthazar Bratt, the latest evil mastermind to threaten humanity, Gru finds himself in the midst of a major identity crisis. But when a mysterious stranger shows up to inform Gru that he has a long-lost twin brother — a brother who desperately wishes to follow in his twin’s despicable footsteps — the former super-villain rediscovers just how good it feels to be bad.

The cool thing is that it stars celebs that you have known and loved for a long time! It stars Steve Carell, Kristen Wiig, Trey Parker, Miranda Cosgrove, Dana Gaier, Nev Scharrel, Steve Coogan, Jenny Slate and Julie Andrews. Yes… JULIE ANDREWS! It’s always awesome to see the celebs that get involved with animation projects! Love it!

I CANNOT WAIT FOR IT TO COME OUT SO WE CAN BRING IT HOME!!! 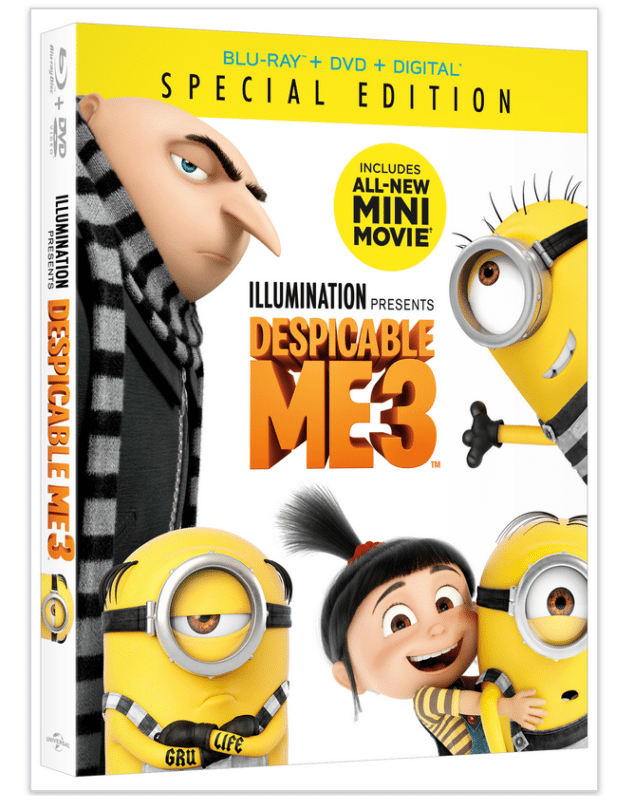 The #1 animated comedy of the year, Despicable Me 3 is the ultimate holiday gift, with almost an entire hour of exclusive bonus features including an all-new mini-movie, Minion moments, and much more! The characters beloved by everyone – Gru, his wife Lucy, their three adorable daughters—Margo, Edith and Agnes—and the Minions provide hours of family fun in this heartwarming comedy.

You will WANT this in your home IMMEDIATELY and there’s no better time than the HOLIDAYS (which are around the corner!)!!