Ready for the hottest and coolest HASBRO GAMES for the summer? We’re a HUGE game loving family, so we’re all over any new games that are coming out! This summer Hasbro Gaming has introduced brand new games and challenges! We arrived home the other day to a HUGE Hasbro Gaming box… you couldn’t miss it! The boys were thrilled (along with Victoria!) and jumped right into it!

What did we get from Hasbro on the game front? Check it out!

As you could tell, the boys were a “little” excited over Pie Face Sky High! 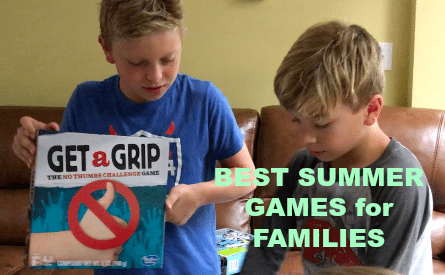 Make sure you add these games into your home this summer for some extra family and friend fun:

1. Pie Face Sky High – Step right up! The hilarious and wildly popular Pie Face Game now let’s players test their strength as they attempt to give their opponent a face full of whipped cream (Whipped cream not included). The Game is set up like a strength-tester carnival game towering over 3 feet tall. One player stands, looks through the mask and faces the throwing arm. The other player hits the base plate with the plastic hammer hard enough to “pie” their opponent! The game has an easy-to-adjust difficulty setting, making it fun for young players and adults. Score a point each time an opponent gets whipped cream in the face. (Whipped cream not included. Additional purchase required). The player to reach 3 points wins.

2. Hearing Things – Hearing Things is for kids 12. It takes the whisper challenge up a notch. It’s all about the challenge of reading lips while trying not to laugh. Players are divided into two teams. One player places the speech-cancelling headphones over their ears and does their best to guess the phrase on the cards by reading their teammate’s lips. When a player guesses the phrase their teammate draws another card and keeps going until the timer runs out. The active team tries to earn as many cards as possible, but if a player passes on a card, the opposing team automatically earns that card. The team with the most cards at the end of the game wins.

3. Coinhole – It’s the tabletop coin-bouncing party game! Players bounce the included Coinhole coins onto a table as they attempt to sink them through the Coinhole board hole. Multiple gameplays allow players to compete individually or in teams. With the Coinhole game, turn a tabletop into an instant party! Coinhole is a registered trademark of David Martin Jr. and is used under license. Hasbro Gaming and all related terms are trademarks of Hasbro. The tabletop coin-bouncing party game. Multiple ways to play. Compete individually or in teams.
Ages 8 and up
For 2 or more players.
Includes 2 Coinhole boards, 4 Coinhole coins, carrying case, and instructions.

4. Get A Grip – The Get a Grip Game is Hasbro’s twist on the ‘no thumbs challenge’ in which players compete head-to-head in challenges without using their thumbs! First, players wrap their thumbs (or for greater challenges, tuck in additional fingers) in the included hand bands so that they can’t use them.

5. Pour Taste – In the hilarious Pour Taste game, players choose 6 ingredients (ingredients not included) and fill each cup with one of them. Then, each player takes a turn spinning the spinner. The Spin will tell the player which ingredients to mix up or whether to choose another player to drink, steal chips or go bankrupt. Will the drink taste ok or totally gross? It’s up to the player to decide whether or not they will drink up. Every time a player drinks from a cup, they earn a chip. If they decide not to drink the concoction, they lose a chip. The first player to get 4 chips wins.

LOVE it! Here’s to some happy and fun GAMING!

Hottest and Coolest Hasbro Games for the Summer!! #HasbroGaming was last modified: August 1st, 2017 by admin