With 4 tweens sons, I’m all about finding shows that they can watch that are appropriate for them, engaging for them and entertaining for them. It’s not always easy to find shows that cater towards tweens to a “T” that parents will enjoy watching, too. As a matter of fact, it can be difficult at times.

Well… I’ve found one that I love – and I promise – you’re going to love, too! 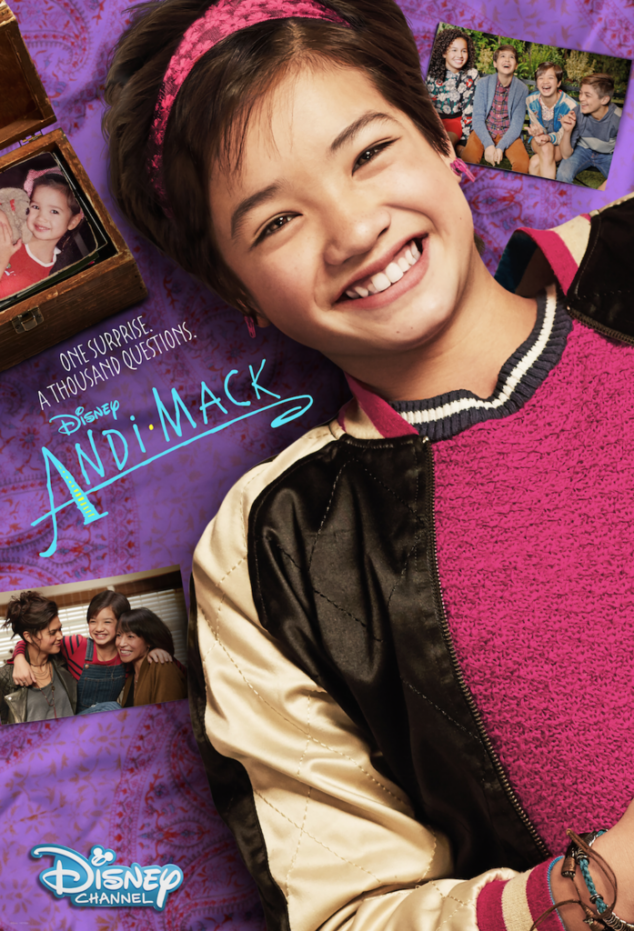 I had the chance to get a sneak peek of “Andi Mack” while in LA for the Beauty and the Beast press trip and also interview some of the cast! It was such a cool opportunity because I really am passionate about finding shows that are perfect for our family. As soon as I viewed the episodes that we got to see as a sneak peek, I knew that it would be a Friday night hit for my boys! It’s funny. It’s fresh. It’s unique. And it’s just a great storyline. It’s the kind of show I WANT my sons watching.

So what is it all about?

“Andi Mack” was created and executive-produced by acclaimed writer Terri Minsky (“Lizzie McGuire”), who is just a rock star within herself! I was a HUGE “Lizze McGuire” fan, so I was ecstatic to hear she was behind this one, too. “Andi Mack” is a contemporary, coming-of-age story about a relatable girl who’s trying to determine where she fits in and the many amazing ways she can live her life. On the eve of her 13th birthday her life goes from routine to roller coaster when her free-spirited older sister Bex returns home with a revelation that changes everything, and sends Andi on an uncharted course of self-discovery. 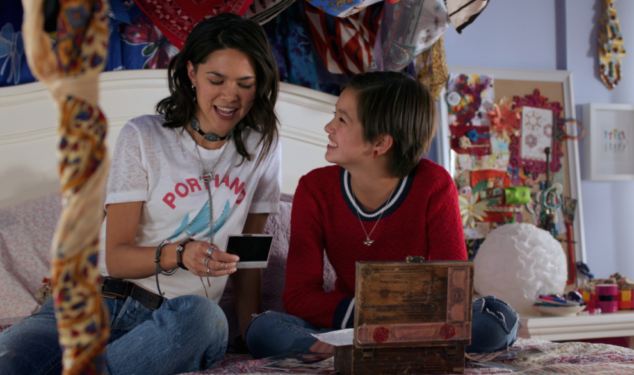 At least she’s in good company; her best friends, Cyrus and Buffy, are also figuring out their places in the world. Along the way, Andi learns that sometimes the unexpected is what makes life great. 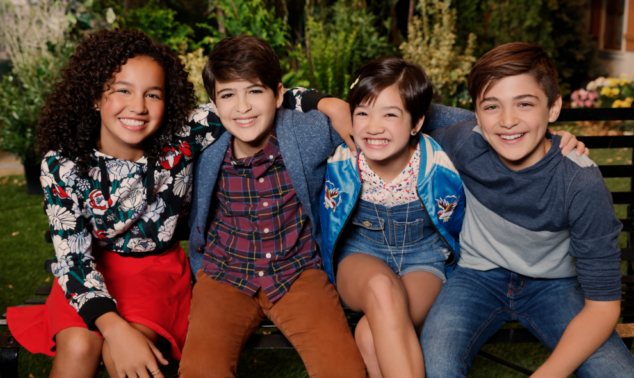 We had the cool opportunity to interview Peyton Elizabeth Lee (“Andi Mack”), Lilian Bowden (“Bex”), Lauren Tom (“Cecilia”), Creator/Executive Producer Terri Minsky and Executive Producer Michelle Manning after we viewed the first (2) episodes! I was BLOWN AWAY by how down to earth and cool and just amazing these ladies were with their time with us. They were so happy to talk about the show and really were incredible to chat with and understand why it was important to be part of this show.

Now… call me crazy, but I was SHOCKED when I found out that Bex was really Andi’s mom in the 1st episode. It was kind of a mixed bag, some of the bloggers knew, some of them didn’t… I was SHOCKED!!! It really caught my off guard, which was cool because it was very unexpected!! We were anxious to ask the cast, “When each of you read the script, were you surprised by that reveal at the beginning? Was it meaty to jump into as an actress?”

Peyton shared with us, “When you get to the end of the first episode, I was like wait, what? Cause you’re just reading through the script, and… wait, what? And so I had to read the last scene like five times before it really sort of sank in, you know? And then it just made it that more meaningful to me.” I loved that because it was nice to see that it was unexpected for her, too. She didn’t see it coming.

Lilian, who plays Bex, shared with us that, “It was super surprising. So that reveal was in the sides that I auditioned with and they were the second pair of sides. And the first pair of sides is this super fun lighthearted scene that was closer to the beginning of the pilot. And I remember reading the sides and thinking, oh, my, gosh, this is so funny. This is really funny. This is great. Oh, this is great. You know, oh, this is a Disney show. This is great… And then that second scene when it takes that turn… that was the thing that cinched me, and I was like, I have to get this. It has to be me.” I loved hearing that that piece of the script really hooked her, she felt the connection at the moment and knew it was a part she needed to play. And I have to say, she plays Bex effortlessly! She’s FANTASTIC!!!!!

Lauren (whom I LOVE as an actress!!) shared with us that, “And for me, I really read it thinking this is something that’s got some meat on the bone for me because I have two kids that are 13 and 16, and so in order for me to pull myself away from wanting to be with them, cause that’s when they need you the most, in a way, I thought, I didn’t wanna be that mom, dinner’s ready, you know? I just thought that I would go a little brain dead, but Terri’s writing is just so phenomenal that I was like, yeah, I think I need to attach myself to this for so many reasons, just how innovative it is and the diversity and, and feeling like when I was growing up, I didn’t have a lot of role models. I’m so old that I was watching whatever that show was where I never felt like I could be those perfect white kids that I was looking at because they just didn’t have anything to do with my reality whatsoever.
Whereas this show is so much more real and reflective of what’s going on in the world today.”

There’s something about hearing from the leading ladies why they attached themselves to a role. It’s always so interesting to me. I love the whys behind the decision. It was so refreshing to hear that these ladies really felt the connection to the characters. They really felt that this story needed to be shared and told. It was just so really cool to see this side of it all.

We asked Terri, “Is there a message that you’re trying to get across particular to that age group through this show?” And her answer (honestly) made me tear up! It hit me to the core and touched my heart.

“Honestly, my message is watch TV with your parents. My goal is I have a daughter who’s 22 and a lot of our conversations were generated by shows that we saw on television and it was just like, oh, you watch a Lifetime movie about bullying and just be like, does that ever happen to you? And I totally think that television is a great medium for parents and kids to start a conversation. And that was my goal. It wasn’t so much of a message to the kids. It was more like, I hope this is good enough for mothers and daughters or mothers and parents — I mean children and parents.Generations of family to watch together.”

Yes. Yes. Yes! I appreciate and love how Terri knows this and sees this as something vital and important today for our youth. It’s a lot different than it was years ago. Kids are attached to technology, it’s important to find shows that everyone can relate to and see themselves in someway, somehow. And then from there – spark a conversation!

My dear friend Christie asked a wonderful question to Terri and Michelle, “I’m raising Asian-American children so it’s really important for my kids to watch this, so can you talk about the importance of a multi-cultural family and the decision to go with that?”

Michelle answered, “The decision to go with it was this one (pointing to Peyton) walked in the room and it was, that’s Andi. It wasn’t — I mean Terri is writing about a neurotic Jewish kid, really… and it was like when she came in it was that was it.”

Lillian added, “Yeah. I think the writing, though, speaks so much to the relatability of Andi because Peyton was already cast when I was going in to read for it. And so when I read the script — I didn’t see it any differently than an Asian-American family. I saw Celia as like your archetypical tiger mom, you know? And I really saw Andi as the kid that I was when I was growing up, somebody who was trying really hard to please everybody and trying really hard to like figure out my place in the world and dealing — I didn’t have the same type of circumstances that, that Andi did. But for me, it didn’t read anything else but an Asian-American family. And for me getting in this was — is so exciting because I’m biracial as well and when I get cast in roles, there’s always an adjustment that needs to be made where it’s like, oh well, you know, maybe you’re an adopted sister or, you know, which [LAUGHTER] which are real things like that I’ve gone in for because I’m — because, you know, the majority of people that we see on TV are Caucasian.”

And Peyton… who is 12 years old… the same age as my son (which is incredible to me because she seems so much older) shared, “Yes. Definitely. I think that the fact that there is different ethnicities on the show, it just makes the show that much more relatable and exciting. And it’s very different from anything that’s on the air right now. So, I definitely think it’ll be good for people who are like us and who aren’t just your average white kid to be able to see that on the screen.”

This show really is a game changer in many ways. It’s bringing a whole new aspect to television for young tweens ans teens and I love that about it, too.

We were anxious to ask Terri, “What else is coming?” We only saw the first (2) episodes, so we were all anxious to hear where it goes from there.

Terri shared, “Teenage girls have essentially never changed. And I just think that’s true. I mean, you know, vocabulary or whatever, but I just think the whole experience of thinking, ‘this is the best day, this is the worst day.’ They’re like this volatile up and down, and everything is like, ‘you don’t understand… you’ve never had this…’ and you’re sitting there going, wow… I think that it’s really great to have Peyton and the other cast members keep me sort of current. The fun part is going like, ‘you know, in Saturday Night Fever when John Travolta and she goes, who?’ [pointing to Peyton] What? And I just like, okay, where — where, how far — where are we?”

So funny, but it’s true. There are so many themes about teens that haven’t changed — ever. But there are things that they do and they know and they talk about that is different from just 10 years ago! It’s important for Terri to make sure she’s constantly in the know so the show is real and raw and honest.

This show is just awesome. It will grab you from GO, believe me! Encourage your kids to watch it and sit with them while they do. As Terri said, it’s important to watch shows together. You never know what conversations will spark from a sit down. Chatting with these ladies was so inspiring and so awesome… I hope “Andi Mack” is a GIGANTIC HIT!!!

Disclosure: This was a Disney Press Trip. All travel was covered.

Why You Need to Watch “Andi Mack” #AndiMack was last modified: April 8th, 2017 by admin