Tangled was one of the first Disney movies that I watched with Victoria. My daughter has the blondest hair, so I always used to talk about Rapunzel and the magic of her hair with Victoria. Honestly, it was how I got her to sit still when she was a little girl and I would brush her hair! I would talk about Rapunzel and have her brush her doll Rapunzel as I brushed her hair! Oh, yes… Rapunzel helped me so much those first few times of washing and drying Victoria’s hair. All that being said, my daughter just fell in love with the movie Tangled and (of course) the character of Rapunzel. As a matter of fact, Victoria dressed as Rapunzel recently when we were on a Disney Cruise and everyone stopped her and actually called her Rapunzel, which it made her night! As you can imagine, Rapunzel is a very big hit in our house.

The second I heard that “Tangled” was going to be an animated series for kids, tweens and families, based on Walt Disney Animation Studios’ acclaimed feature film, I was ecstatic! 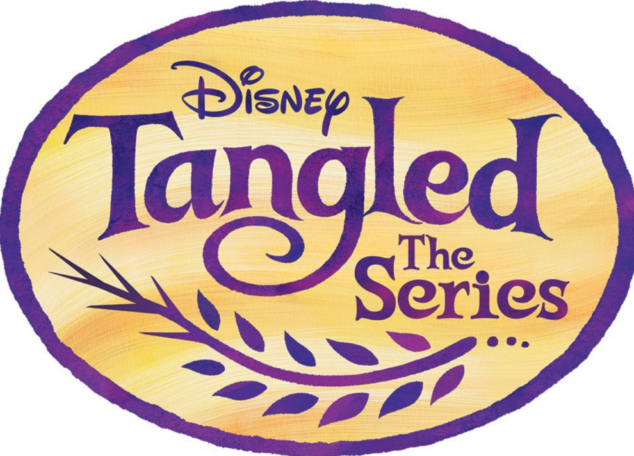 I knew that this would be perfect for Victoria and me to watch together regularly and I LOVED that we would be able to see a continued story of such a beloved character. The even cooler thing is that Mandy Moore and Zachary Levi are reprising their roles as Rapunzel and Eugene (also known as Flynn Rider). The series will premiere in 2017 on Disney Channels around the world and believe me, we will be tuning in again and again and again!

The series is going to kick-off in a very special way. It will begin with a Disney Channel Original Movie – Tangled Before Ever After, premiering on Disney Channel (in the U.S.) on Friday, March 10 at (8/7c)! 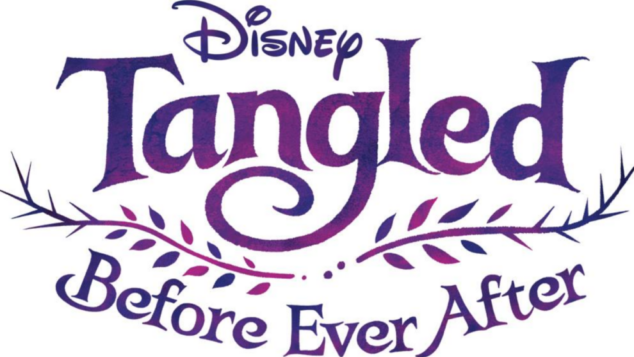 Check out the 1st 5 minutes of Tangled Ever After here:

And from there, “Tangled: The Series” premieres Friday, March 24 (7:30/6:30c) on the Disney Channel! As Rapunzel reacquaints herself with her parents, her kingdom and the people of Corona, she comes to realize that there is so much more she needs to learn about the world and herself before she becomes Princess of Corona. With the help of her handmaiden and friend, Cassandra and Eugene, she begins to find the adventure she desires right outside her door. Life is about to get a little hairier! 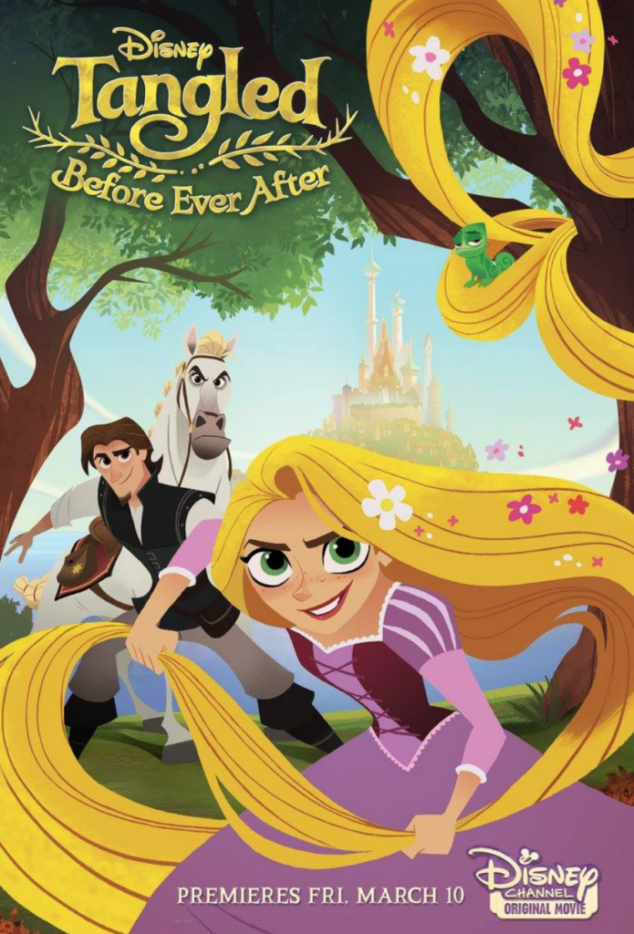 I had the special opportunity to check out Tangled Before Ever After while in LA and it was SPECTACULAR! It really is so amazing to see these characters that you know and love, and see this story move forward in such a fun and beautiful way. 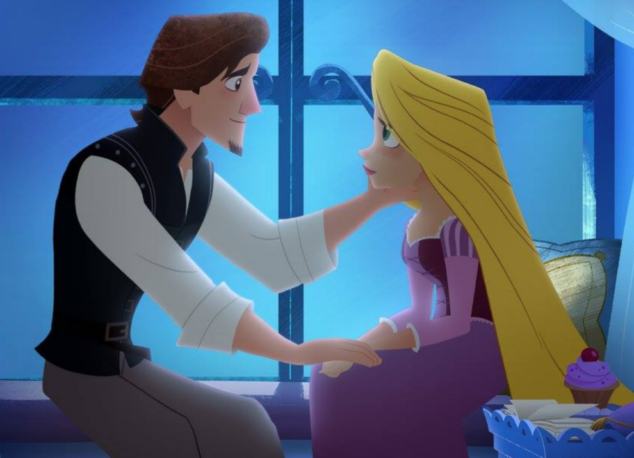 There are many twists and turns and it’s wonderful seeing Rapunzel getting to know her parents and really coming into her own. Believe me, this is a series you’re going to fall in love with, with your family. That’s what really stuck out to me most, I know that I will be enjoying this as much as Victoria!

But!! The best part was when we were able to have a Q&A with Executive Producer/Supervising Director Chris Sonnenburg and Supervising Producer Ben Balistreri after we viewed it! They were the nicest guys ever and just wonderful to answer our questions! 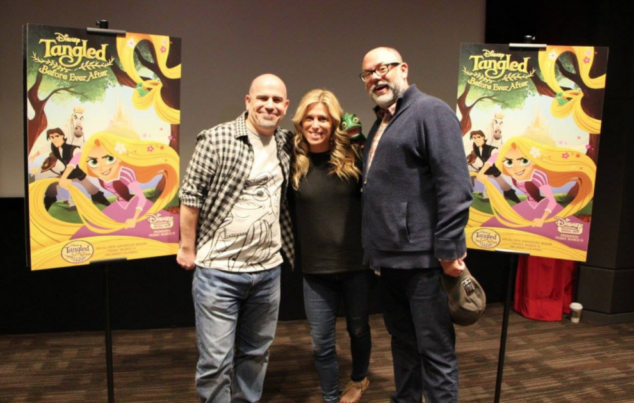 We had to ask Chris the most obvious question of all that we were ALL thinking, “What made you decide to continue with Rapunzel and her story?” I mean, taking this on can’t be easy, so we were interested to know why the importance to continue.

“For me it really kind of came down to, I have two daughters at the time were 14 and 12 are now 15 and 17. And there just seemed to be this idea… just looking at the story, there was this moment at the end of the movie where they meet and they fall in love and then there’s the short, Tangled: Ever After, where they get married. And just looking at the two of those moments I was wondering well, what happened? Did they get to know each other a little bit more? Like what happened in between that time?… And it started to become what do I have to say about this time in these people’s lives, and young people’s lives about getting to know yourself, getting to know the people in your lives, getting to understand your relationship with your parents? And if the kids that had seen the movie in 2010 were maybe 10 at the time or eight, then they’re probably getting to be about 17 years old and they might want to know how is this character that I loved so much as a kid coming to grips with this part of her life? And that was kind of for me the in of why to tell the story and how to tell the story.” 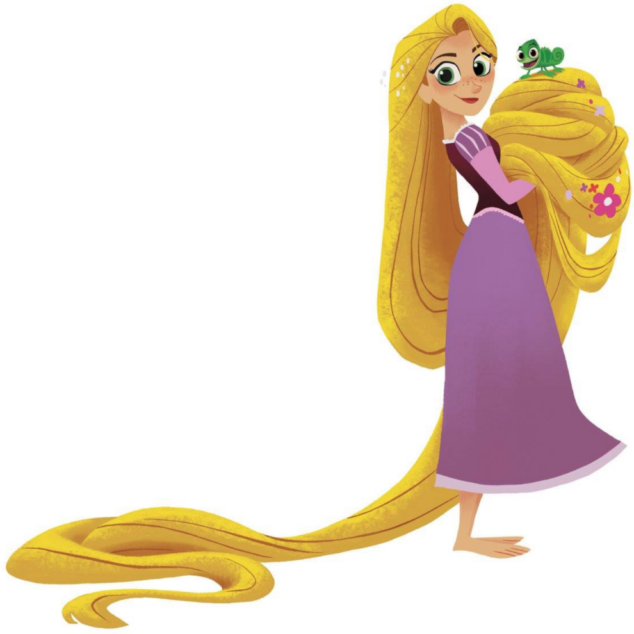 I loved hearing from Chris that a HUGE inspiration for him is his own 2 daughters. They give him the ability to know what it’s like to have a teenager, so he’s able to bring that expertise into the character and really build her up as much as can be. I love seeing how someone’s mind works when it comes to finding the perfect inspiration for a character.

I was really taken to the journal aspect in the movie. I’m a HUGE journal lover and always kept one when I was younger. In this age of social media, I LOVED that Rapunzel was gifted a journal by her mother, especially with the beautiful meaning behind it. It really made me smile. I asked Chris, “I love the journal aspect. Is there any special meaning behind that quote at the beginning?”

“It’s two things. Number one, I’m very much fed by my daughters. My daughter, Arianna, Queen Arianna I mean, I named the Queen after her… Right when we were breaking the story and figuring out what everything was going to be, she had gone on this trip to Mexico with a huge group of people to build houses for people, kids in Mexico. She had just turned 14, and she was going on this big trip. I didn’t know if she was ready for it. I didn’t know if I was ready for it. My wife and I would like she old enough to do, like go by herself and everything. And there seemed to be this kind of questioning of, you know, is she prepared for this… She was ready for this life of traveling beyond the borders and all this kind of huge life excitement. And she went and she had come back and they had given her these journals to kind of take notes and get to know people and stuff. And when she had come back the little journal was completely covered in drawings of the little girls that she met and how she learned how to put a hinge on a door and she learned how to do all this fun stuff… but she kept all these drawings of her journey. And I was like that’s what Rapunzel would do. She’s very creative. She’s very much a storyteller and that’s how she would do it. So we immediately said let’s give Rapunzel a journal.”

Amazing, right? I want girls across the world to start doing this! I love how passionate Chris was telling us this story, too. You can tell he really wants Rapunzel to inspire and be this wonderful creative force. I just love it!

Chris went on, “So we gave her this journal and then the added element of the inscription came very much from the movie, Glen Keane who created the character of Rapunzel for the film, had come and I was talking to him about what we wanted to do with the show and he had done this quick drawing for me. And he had done this picture, this beautiful drawing of Rapunzel and on it he wrote, ‘Plus est en vous,’ and I was like what is that? And he says well, in the movie, we had this phrase that we were using just in the story room, at the end of the movie all of her magic is gone but she squeezes out one last drop of magic out of her. And he said the the meaning behind that is that we all have more in us that we can push through it and he was telling me when you feel like you’re at the end of your ropes, if you can’t give any more, push through and there’s always more inside of you. And I thought that was such a beautiful sentiment and I thought that the mother would give it to Rapunzel as like listen, everybody has these expectations of you of a princess, of a daughter, of a girlfriend. But there’s more in you… show the world what that is and, and keep record of that in this journal. So, the phrase means there’s more in everybody.”

I was so happy someone asked Ben about the design because it is different than Tangled the movie. “What was the inspiration for the design for the series?”

“Chris and I both come from old-school traditional, 2-D Disney background. We both started a little over 20 years ago, and so just our passion for that, that feeling of like a good Disney traditional animated film really I think drove us early on to be like hey man, we got an opportunity to push the side of it. And then just from a bigger story point we really sat down and we were like if this is Rapunzel telling her story, by the time this whole series is over, this should really feel like Rapunzel told us her story. She’s not going to sit down in computer programs and be typing zeros and ones in getting mathematical equations down. She’s going to sit down and put her hand and actually do it herself. So, we really kind of embraced the whole ideological side of doing a 2-D series and where we put in everything on these little brush strokes like dry brushstrokes in that should feel like she painted it. The lines that surround everything and inside we use a very rough line quality to really give a tactile sense of sketching. We lay off Photoshoppy gradients as much as possible. They pop up here and there but we kind of stay away in place of feeling like it really feels like a storybook come to life.”

And that it does, throughout!

I’m telling you – you’re going to fall in love with this series! Make sure you tune in on March 10th for the short movie and then March 24th for the series!! It truly is a passionate project from these guys and you can see and feel it throughout!

TANGLED: BEFORE EVER AFTER and Q&A with Executive Producer #TangledTheSeries was last modified: March 10th, 2017 by admin
SHOWHIDE Comments (0)

TANGLED: BEFORE EVER AFTER and Q&A with Executive Producer #TangledTheSeries was last modified: March 10th, 2017 by admin