Baby Daddy Season 6 is here!! Are you ready!? My teenage niece has been OBSESSED (notice the capitalization) with the show Baby Daddy since the very beginning. She has literally watched since episode 1 and it’s one of her fave shows on TV! When I told her I was heading to the #BeOurGuestEvent Press Trip – the only event she zeroed in on was the Baby Daddy event! She was so excited for me to see a sneak peek of the premiere episode of Baby Daddy Season 6, but more so – meet some of the cast!

Oh, yes… she might just be Baby Daddy’s BIGGEST fan!

If you’re not familiar with the show Baby Daddy, get yourself acquainted. It’s adorable and sweet and funny all at the same time! The series follows Ben, a man in his twenties, who gets the surprise of his life when a one-night stand leaves his baby at his doorstep. Ben decides to raise his little girl with the help of his brother, Danny, his two close friends, Riley and Tucker, and his sometimes-overbearing mother, Bonnie.

As someone who has watched 5 seasons of Baby Daddy, you truly become invested in the characters. You want to know what happens next. You’re rooting for them. You want them to succeed. You want them to fall in love. You want to see how they will raise this adorable baby girl. What’s cool is that these characters become your friends, you really do tune in each week because you care about their lives and how they’re intersecting. We had the coolest opportunity to check out the premiere episode of Season 6 of Baby Daddy, “To Elle and Back” that will air MONDAY, MARCH 13 (8:30-9:00 p.m. EDT) on Freeform. In a nutshell, three months have passed since the finale, and Ben is still enthusiastically searching for the mysterious Elle. Danny and Riley are hunting for a good doctor to help with the pregnancy, and Bonnie desperately wants to be involved. Tucker is back from Los Angeles, but he refuses to tell anyone what happened when he was there.

The premiere episode of Baby Daddy Season 6 was awesome and such a great starting off point for Season 6! We’re left with tons of questions just after the 1st episode… Does Tucker ever come clean with what happened? Is Riley having a boy or a girl? Will Riley use the same doctor as Bonnie? Will Ben ever connect with Elle? Will Bonnie actually be a good help with the baby once it arrives? Are Riley and Tucker ever going to get married? So many questions!!

After we screened the premiere Baby Daddy Season 6, we had a HUGE treat! We had a Q&A session with Chelsea Kane (“Riley Perrin”), Derek Theler (“Danny Wheeler”) and Tahj Mowry (“Tucker Dobbs”)! Oh, yes! These 3 were incredible and so open with their time and so sweet to answer all of our questions! You can tell that they are actually GOOD FRIENDS on and off the camera, which was adorable. Being a fan of the show, you hope that they have the same kind of friendship banter on and off the screen, it was awesome to see that they actually do!

We were excited to hear what Season 6 has in store for the characters! We wanted to know what else we an expect!! Chelsea Kane said that, “It’s a big season for us for anyone who has been sticking with us through the last 100 episodes. I think a lot of story lines that were there from the pilot are really wrapping up this season in such a beautiful way. I think the fans will love it!”

So what’s up for each character this season??

Tahj went first, “We dive a little deeper into each character. For Tucker specifically we find a little more about him. He’s in a different space mentally than he normally is and not his upbeat self.”

Derek chimed in, “Danny is trying to handle his pregnant girlfriend which is challenging enough, especially for Danny. Ben is searching still for his love that he happened to cross at the end of last season. That’s interwoven throughout the season.”

And then Chelsea updated on her and the character of Melissa, “Brad’s in prison. Brad goes to jail and Riley is defending him. So that’s a big topic this season, not only is she hormonal and trying to hide her pregnancy. Which I also think is a hot button issue. She’s worried once her boss finds out that she is pregnant she’s going to see one big giant maternity leave. She’s trying to hide her pregnancy and on top of that defend Mrs. Wheeler’s husband. So she’s kind of an emotional train wreck for most of the season.”

We were curious if any of them have any input into what happens on the show.

Chelsea answered, “We always make the joke now that the lines between our characters and our real selves have been completely blurred at this point. We’ve been so lucky to have pretty much the same set of writers throughout all six seasons and we’re really good friends with all of them too. So after the show on Friday night we are all going to the bar to celebrate or dinner during hiatus. Often times on Monday morning we’re sitting and having lunch with the writers and the crew telling some wild story about what happened and sure enough 2 weeks later it’s in the show. I guess we input in that way by default.”

It was cute to see what each of them would like for their character this season. I know they don’t get to write the script, but they do know these characters inside and out, so this was a fun question to hear get answered!

Chelsea kicked it off, “Obviously give birth. That does happen. That was something that I definitely wanted this season once we established that Riley was pregnant. I wanted to see it through so you could meet our baby.”

Tahj interjected, For Tucker I guess, a lot of people ask when he’s going to find love and meet that girl. Well… this season that might happen. So that’s something cool and I think fans will really like that!”

And Derek shared, “For my character, I was hoping that Danny would tie the knot with Riley. That’s something I’m hoping for in the future.”

Tahj added, “I think that’s what’s most special about this season. And I’m not just saying this but I think it’s the funniest season we’ve done. it’s also the most grounded and heartfelt. I don’t think you get that in multi cam sitcoms nowadays. It’s story and character.”

Honestly, the cast was just awesome!! The cast of Baby Daddy Season 6 were so cute together and there was a ton of laughing throughout the Q&A! They also have some HUGE news this season — they will be reaching 100 episodes which is a HUGE milestone! They also just won the People’s Choice Award for Favorite Cable TV Comedy!

Derek added, “Hitting 100 is hard to come by these days, so that is an amazing feeling for sure – for all of us. The People’s Choice Awards was an amazing night. We got to be surrounded by all these extremely successful people in this business that we look up to… we lived it up! We had a such great time as a family! It was such a special night because we were all together and won this award from our fans and the people that voted!”

I’m really happy for these guys! Hitting 100 is a TV milestone! This cast is the kind of cast you root for and want their show to keep succeeding!! After our Q&A they all took photos with each blogger AND came and celebrated with us at a Baby-Shower Themed lunch!!

And the best part!! They ALL participated in a game of CHARADES!!! Talk about having a blast with these guys!! 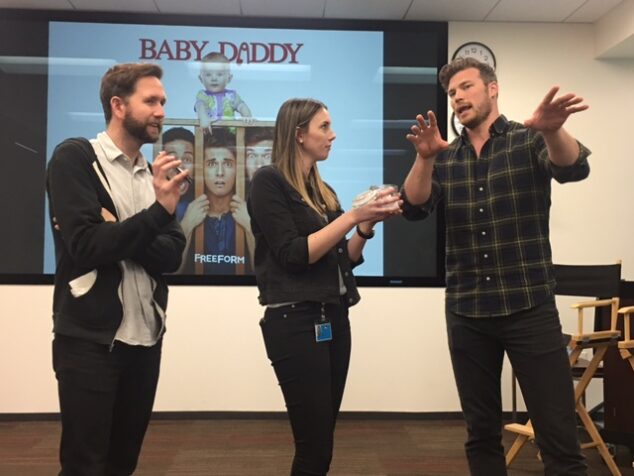 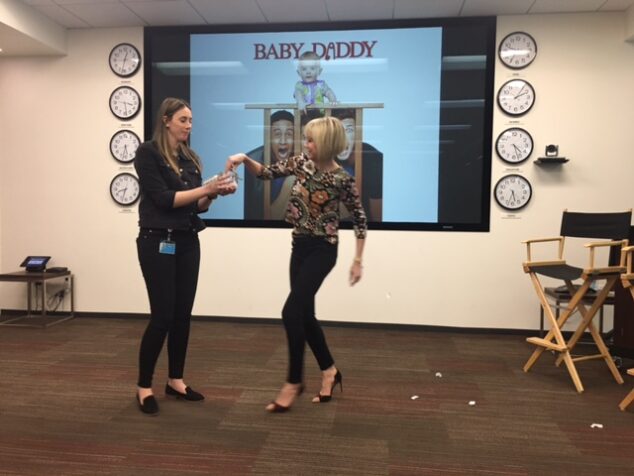 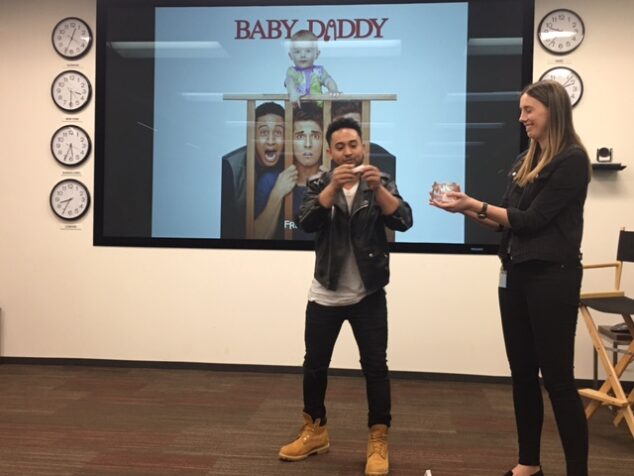 What a total blast!!