Behind everything great is someone who masterminded the whole thing!

James Gunn – director of Guardians of the Galaxy Vol. 2 – is definitely masterful. He’s creative. He’s smart. He’s passionate. And yes, he’s a master at crafting movies that people just fall in love with for various reasons.

But Guardians of the Galaxy Vol. 2?

Yeah… he seems to have rocked this one out of the universe because after seeing the trailer, I can’t wait to see the movie!

Throughout the week on my blog I’ve been sharing interviews from the cast of Guardians of the Galaxy Vol. 2. Chris Pratt, Zoe Saldana, Dave Bautista, Michael Rooker and Karen Gillan… all of whom praised (I mean praised) James Gunn in their interviews. I have to say, as an “outsider” coming to the movie set and getting to chat with the cast up close and personal, it was pretty incredible to see everyone really talk so highly of James. 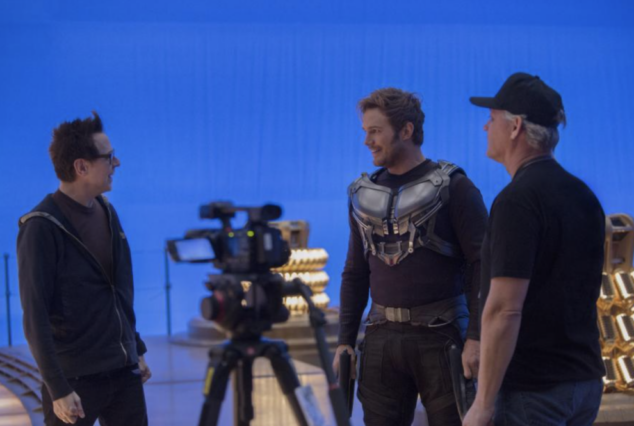 As soon as we got word that we were going to actually have time to sit and interview James, we were all thrilled! He’s the proud parent of this film and getting the chance to snag some time with him was just awesome. As soon as he sat down (you can easily tell he has a ton of energy), we HAD to ask the first obvious question, “When did you come up with the sequel idea?”

It was pretty neat to hear that James was ALREADY taking notes for a sequel during the first movie!

“The story started to ferment during the first movie. I was always taking notes and thinking about it. And I knew this was a story. I wasn’t sure if it should be the sequel. I wasn’t sure if it should be a third movie in a trilogy. And then when it came time to actually write the screenplay, I’m like, let’s just go for broke and do the story that I had in my head, which was this one. Which I really started actually physically writing the treatment on the first day, on the day the first movie came out.” 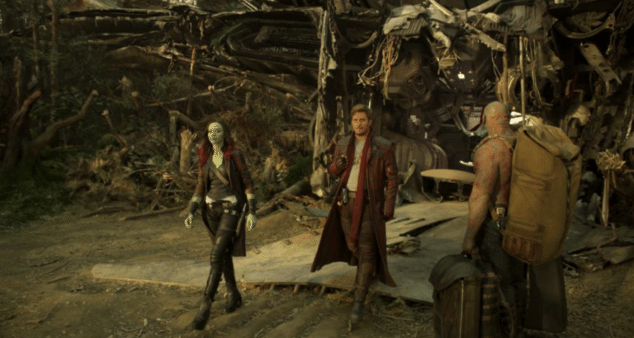 One HUGE surprise for me was finding out that Kurt Russell had joined the team on this movie. I have been a Kurt Russell fan for years and I was really excited to see that he would be playing Peter’s father in the movie.

“Kurt at one point Chris brought him up and I didn’t take him very seriously. But another point, Fred Raskin, who is our editor, brought him up. He really liked him as an actor, and if an editor likes an actor, you know that the actor is good. Because there’s a lot of actors that cut together very well because you have to piece together their good performances and it’s actually difficult… But the fact that Fred liked him so much meant he was a strong a lot, which was great.”

One thing I love best of ALL about Guardians of the Galaxy Vol. 2 is the music. The music is a character within itself. The music is part of the Guardians experience. As someone who LOVES music, it was really interesting to hear James’ explanation as to why music was such an important character in the movie.

“I don’t think so much about what’s the message of the movie, so much as what’s the affect it has on people. And for me, the thing and the reason I make movies is that when I was a kid and I saw a great movie with my family, it made me love people more when I walked out of the theater than when I walked in. So if there’s anything that this movie can do it’s that. I think it’s a really, truly emotional film. I think the first one was emotional, and I think we take this one to a much deeper level of the emotion. I also think it’s a lot about that the The Guardians are a group of outcasts. They’re all creatures or people who don’t belong in society anywhere but with each other. And one of the very moving things to me from the first movie is just getting messages from all the people who feel like they’re outsiders, who relate to the Guardians, you know… I also think the story is a story about kids from families that are not traditional.”

“I really wanted to do number two when I was doing number one. And I definitely would really be, mostly because I loved the people that I’m making the movie with, you know, the actors but also the producers. The idea of three is very interesting in that way. But I don’t know if I’m gonna do that. But to answer your question, yes. I come up with ideas every day for, what could be future Guardians’ movies and also other movies to have those individual characters go off and tell different stories. It’s just sort of what my brain does all the time. And Jonathan Schwartz who is our Marvel producer, who’s always on set, I’m always joking about things that could happen, or coming up with ideas with him. So it’s…I’m always doing that. ”

As you can tell, James was awesome to interview. The ENTIRE CAST was AWESOME to interview. I loved that they were all so real and raw and honest with us. I truly wasn’t expecting that at all. I was touched that they trusted us and really were willing to be so open and so cool. 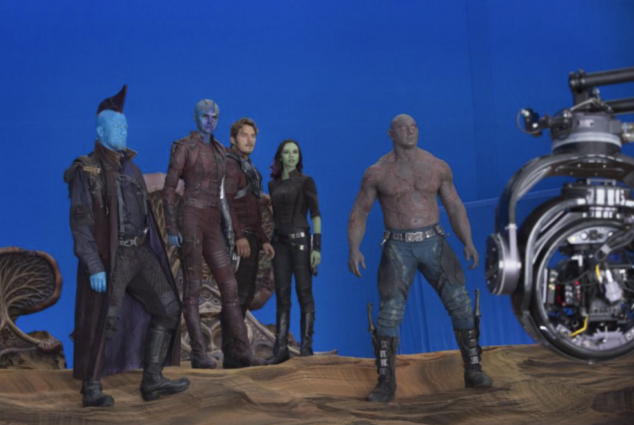 After chatting with James we get to watch some scenes be shot! The process is unreal. It was fascinating to see how much time goes into something that is less than 2 minutes long! It was just really interesting to see the cast get set to shoot a scene and beyond that… really get into what they were doing at the specific moment. Watching James direct was beyond cool. He knows every single thing that he wants shot and he makes sure he gets what he wants. Just seeing the full process was crazy-cool. Not to mention, seeing Chris and Zoe joke around between takes was super fun, too! 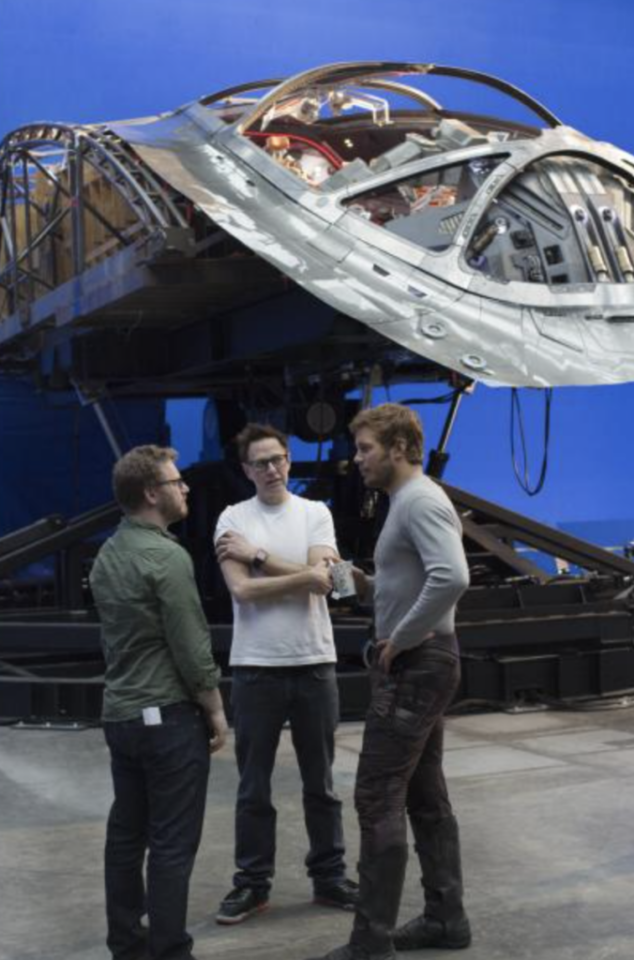 The HUGE takeaways for me from visiting the set and watching them work was how well they work as a unit and how they really are a family.

Hearing James say that Guardians of the Galaxy Vol. 2 is about them being a family, well it certainly looks like it’s pretty true in real life, too. 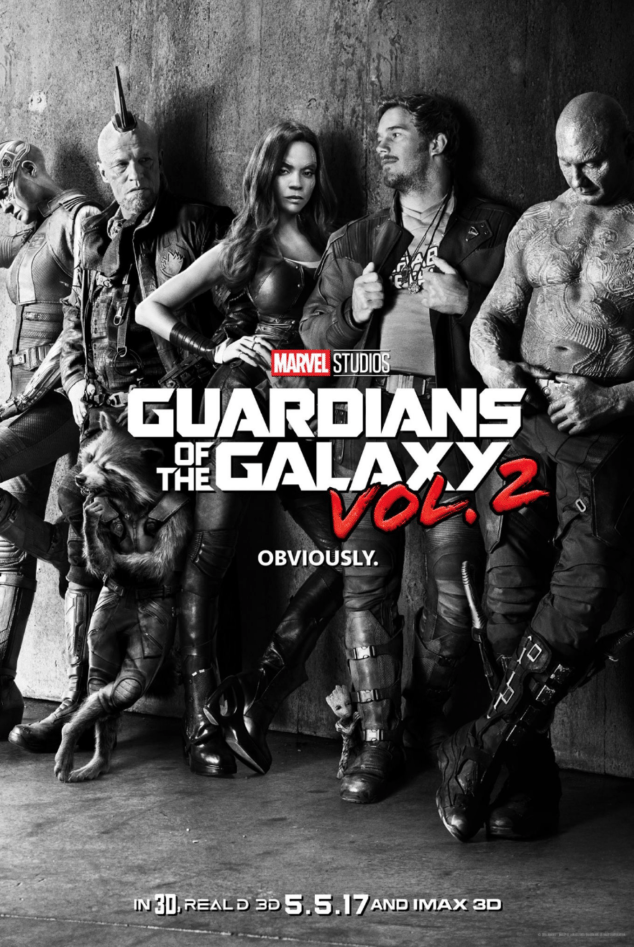 You need to make sure you’re the first in line to see this movie!

It’s going to be EPIC!

GUARDIANS OF THE GALAXY VOL. 2 is in theaters May 5th!

Disclosure: This is a press trip with Marvel. All travel expenses were covered and all opinions are 100% my own.