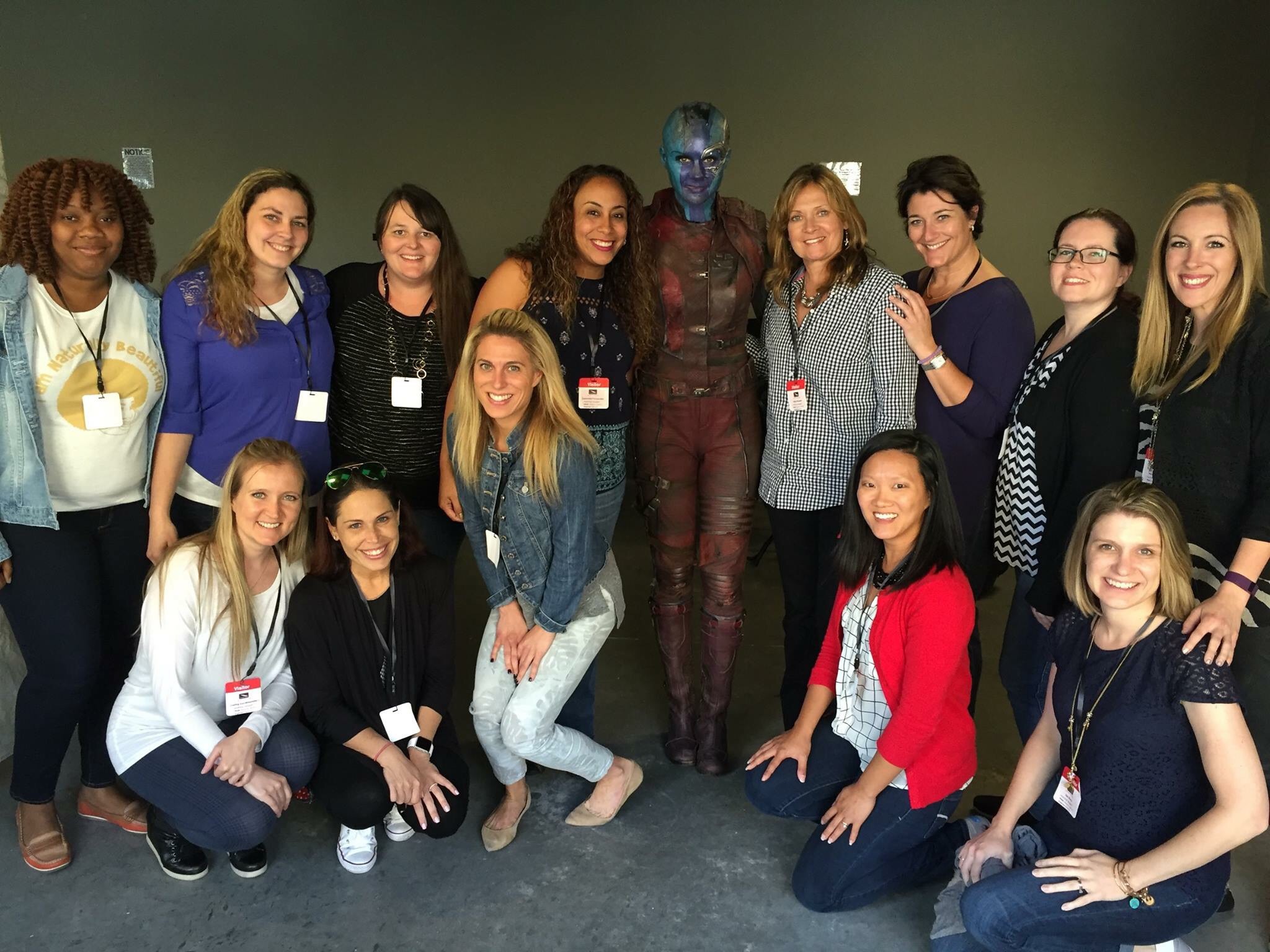 It’s so crazy meeting the “real” person behind a character. I don’t know what I was exactly expecting, I knew that Karen Gillan is playing a role, she’s not actually Nebula (although she came to meet us between scenes and was head to toe in costume!)… but I wasn’t prepared for the overly nice and soft spoken woman who sat before us answering questions during our blogger interview. She was incredibly patient. She was incredibly sweet. And she was incredible with her time, truly making sure to answer everyone’s questions.

As soon as Karen walked into the room for our interview, we could tell that she had been shooting some kind of “rough” scene. We couldn’t avoid asking the obvious because she had dirt all over her! 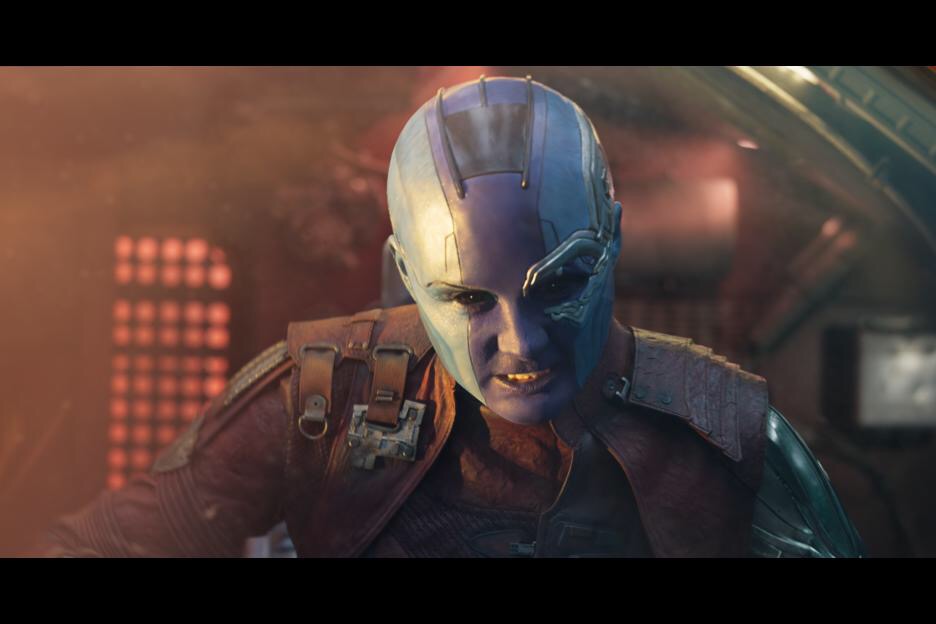 She laughed, “There’s a lot of that happening on this film, actually. Yeah, she [Nebula] gets up to a lot of stuff in dirt and claiming things within Gamora.”

Immediately that peeked our interest… her and Gamora?? “I think we’re just going to really delve much further into it and we’re really going to learn about their backstory, as well, which is really exciting for me as an actress to kind of explore. We’re going to learn that they have very severe daddy issues… usually they communicate quite physically. Like it’s sort of how sisters pull each others’ hair, they sort of try to kill each other.”

If Karen was trying to get us VERY excited about the movie, it was working – believe me! Hearing that their relationship will be dissected and really honed in on is very cool to hear!

The one thing that we kept hearing from every cast member was how exciting it was to be back. There wasn’t ONE person who seemed anything other than truly excited to be back in action with the cast. “It’s so nice to be back. I mean, I feel like it, it’s such a line to say… we’re like one big happy family. But we genuinely are. Yeah, it’s great. Everyone’s really nice and it’s just so much fun to be on this set and they play music and it just really sort of joyous experience.”

I don’t know if this is typical for movie sets, but it was really amazing to hear this over and over and over again. Cliche or not, whatever the secret to the sauce it, it’s incredible! 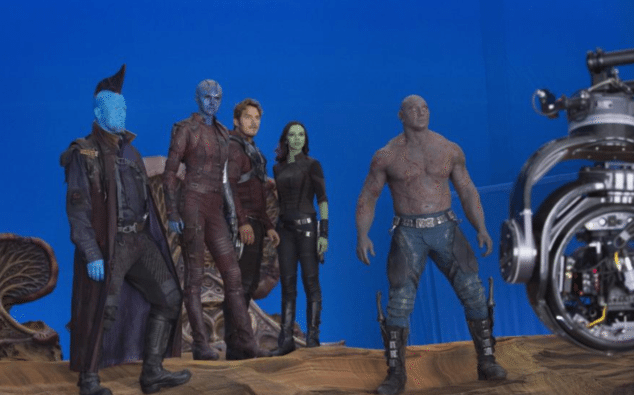 What makes Nebula stand out to me the most is her costume. I mean, she’s BLUE! The costume looks like it must take hours to get on her and she needs to do this consistently throughout the film. It’s always amazing to me to hear from the actors or actresses about their costumes because the costume makes them, well… them for the movie! Asking Karen about her costume (and the comfort of it) was literally one of the very first things we asked! “I mean elements are comfortable. [LAUGHING] I’m thinking– it’s not what I would choose to wear lounging around the house. I mean this is not very comfortable, but it looks so cool so it’s worth it.” Now, in terms of hair and makeup for the film, are you ready for this!? “I have been able to keep half of my hair for this film, which is very exciting. So that added an hour of just wrapping all the hair up in a bald cap. And then it takes about 2 1/2 hours to put the makeup on, which is actually quicker than the last film. The last film was maybe around five hours for the full process. So it’s significantly [less]– I don’t know how that happened. And then to get into this [costume] is about 20 minutes. It’s quite a long process, but it’s just so worth it…. it sort of does half of the job for you as an actor because you look like this.” And I’m telling you right now, to see Nebula up close and personal is fascinating! The costume is just over the top incredible!

What was cool about chatting with Karen was that she was so honest about her excitement in coming back for Guardians of the Galaxy Vol. 2. It’s funny, in my mind I just kind of thought they all expected to be back, but it’s SO NOT the case! As in Karen’s case, she shared with us, “I e-mailed James the director and just wrote ‘Oh, my God, I can’t believe I get to do all this stuff.’ Because when I went on to the first film, it was originally an eight day shoot, and I felt that that was the end of my character as well. When I found out I was coming back for the next film, I was like what? And it was really cool because in the first film they just kept on rewriting my ending. And I was like okay, which one is going to be used? I really didn’t know because we shot a few of them. When I found out I was coming back for the next one, it was just amazing. And he’s [James] given her all this backstory and we understand why she is so bad and she has motivations, and it’s just sort of really fleshed out which makes me really happy.” 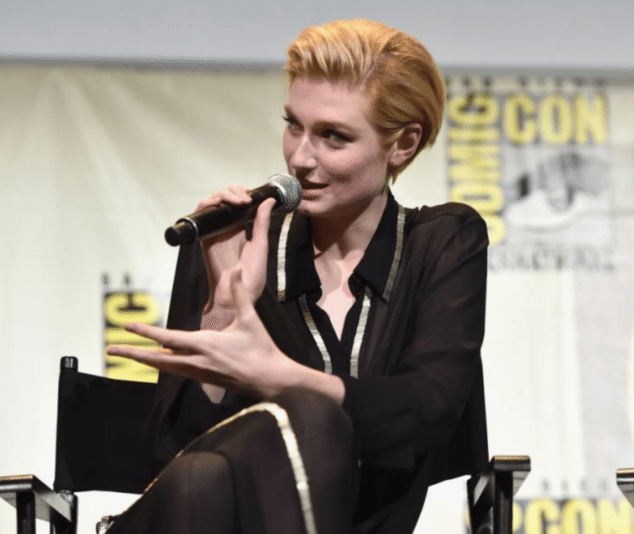 We were intrigued about hearing that we would be learning more about Nebula’s backstory because we really only know her as bad. Did this mean we would see a softer side of her? “Maybe, yes. I think so. I think we’re going to understand her more. We’re going to have a bit of empathy towards her. As to whether that makes her soft, I don’t know because she’s, you know, she’s still classic pissed off Nebula. But we’re just going to understand why she does the things she does and understand her relationship with Gamora in much more detail and maybe understand that Gamora wasn’t as nice as she makes out towards Nebula in their childhood.”

Oh, man… we were getting all the juice here!!

As we sat chatting with Karen, it was obvious that she has a true passion for acting. Being in a Marvel film is GIGANTIC… we really were interested to know what initially attracted her to this role. “It’s interesting when you audition for a Marvel film you don’t really know that much about it. All I knew was that it was a female villain and that was enough to attract me to it because, you know, with these big films – quite often a girl is the girlfriend or some sort of glamorous role. But this was totally different. And I was like ‘wow, that’s really cool.’ My dad always told me to aim to be a Bond villain rather than a Bond girl, so that was kind of like a cool moment for me. I just auditioned, it felt like it was going to be a fleshed out interesting character with places to go. And she was just creepy, which is fun.”

How awesome is this? It’s funny – I remember certain things about each actor/character interview, and with Karen, I genuinely remembered the line about her dad wanting her to aim for the Bond villain, not the girl. It was such a cool moment to hear and it’s amazing to see that this dream of being a Marvel villain came to pass! How awesome!!

Before our interview with Karen wrapped up, we were curious to hear who her favorite Guardians of the Galaxy character is… “Oh, good question. The new character Mantis is pretty great  and the actress who plays her is brilliant. I couldn’t imagine anybody else playing the role. But I’m going to say that my favorite is actually Drax, I think he’s the funniest person I’ve ever met on and off screen. He can make anything funny and he doesn’t try to and that’s why it’s so funny. His dry delivery, just how huge he is without dry delivery is like such a funny combination to me. Like everybody dies whenever he’s acting!”

See what I mean? It’s the perfect set to be on.

Interview with Karen Gillan of Guardians of the Galaxy Vol. #2 #GotGVol2 was last modified: February 13th, 2017 by admin
SHOWHIDE Comments (0)

Interview with Karen Gillan of Guardians of the Galaxy Vol. #2 #GotGVol2 was last modified: February 13th, 2017 by admin