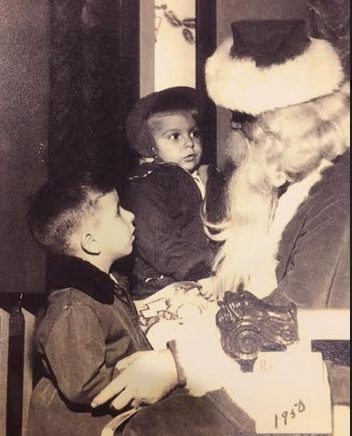 There are many, many countless things that I treasure about my late mother-in-law Flo, things of immeasurable worth to me.

One of these things, one very, very special thing, is the gifts she left in photographs of her 3 boys, photos that tell of moments and stories and lifetimes.

This photo with Santa, dated in her hand “1950”, tells of a moment that I otherwise would never know, could never know, a moment when Barry was two and a half years old, sitting on Santa’s lap, wonder-struck, eyes wide with curiosity, his tiny hand clutching a piece of paper, perhaps a program of whatever event Flo was attending that day, maybe a little apprehension on Barry’s face (although if I know Barry, maybe not so much!)… his older brother Stephen standing, just as wonder-struck as Barry.

I see them so clearly in Barry’s eyes, his curiosity, his innocence, each captured in glorious black & white, always leaving something to the imagination. I can almost hear Santa’s voice, calm and deep and low, coming from beneath that snowy white mustache, a magnificent voice, holding the boys’ attention and captivating their imaginations – in that moment, that one moment, captured in this photograph.

I don’t know where this photo was taken, but I’m quite positive that it had to be somewhere in Providence, RI, where my in-laws lived back in 1950; I’m guessing a social club, a church event, somewhere Santa would make a grand entrance, jingling all the way, Ho-Ho-Ho-ing in his red velvety suit and hat, long snowy white beard and, I’m sure, wearing tall, black boots and carrying a big, big bag of toys. That’s what Santas did back then.

I know that Flo would have dressed her boys meticulously for this event — the coats with the fancy collars and adorable hats. So 1950s!

I also know by dates of birthdays, that Flo would be 7 months pregnant with her 3rd little boy, Richard, at the time of this photo with Santa.

I can see all of this in this priceless treasure of a photo, a memory that I could never, ever have “experienced” without Flo’s love of photographs… almost like she knew someone would come along one day who would treasure these moments as much as she did, and carry them and pass them around, *share them, just as she did, with generations to come.

*As I was ready to publish this post, something made me turn this photo over, and there, again in Flo’s own hand, I discovered this… 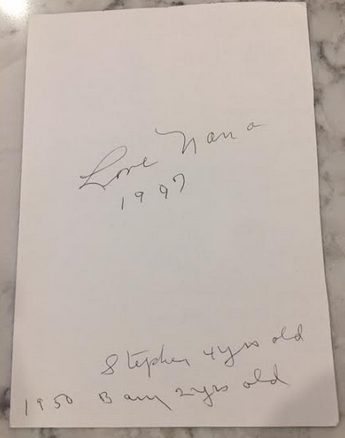 Flo was looking over my shoulder to make sure I got things right!