October 29th marks World Psoriasis Day – a day dedicated to people living psoriasis and a day giving the patients the voice they deserve.

Twelve-time Olympic medalist and author Dara Torres is one of the 7.5 million American patients living with psoriasis. This past August, having just returned from her poolside reporting duties in Rio, she dove into launching Celgene’s SHOW MORE OF YOU campaign, which aims to inspire people living with psoriasis to raise awareness about their condition and celebrate their accomplishments.

Despite living with plaque psoriasis since the late 1990s, Dara never let fear or embarrassment stop her from achieving her goals, which included being the first and only female swimmer to represent the U.S. in five Olympic Games and being a New York Times best-selling author. As Dara puts it, “I’m someone whose business suit is a swimsuit, so I had to learn how to be comfortable in my own skin.”

As you all know, we’re “kind of” a swimming family. I say that jokingly. We live and breath chlorine in our family. My 4 sons are all competitive swimmers and almost every single night (except Tuesday and Sunday) we’re on the pool deck. It’s what my sons love to do and it’s something I love seeing them enjoy! Dara is someone who has always stood as an incredible example to my kids as to what you can achieve with hard work, dedication, determination and devotion. When I heard she partnered with Celgene, I loved that she was – yet again – inspiring and motivating more people to be true to their selves.

Dara’s passion to help others is why she teamed up with Celgene to launch the SHOW MORE OF YOU campaign, which continues its mission of encouraging patients to share inspirational photos and messages of how they are showing more of their true selves through World Psoriasis Day. 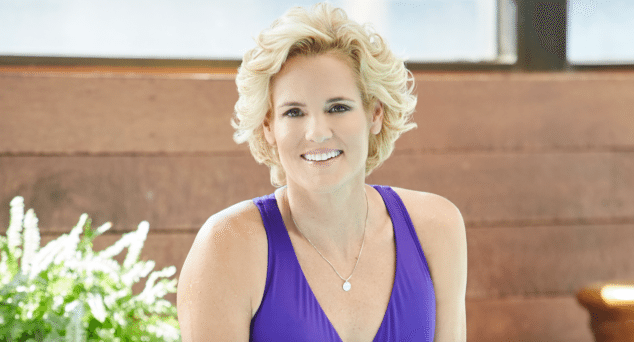 Recently I had the chance to chat with Dara why it was important for her to share her story. I have to say, what a true class act and gracious woman! Big fan!

1. As a swimmer, did you have any issues with extra itching? I know being in and out of the water must have been tough on your skin, did it have any extra issues with your psoriasis?
I first started to notice psoriasis symptoms in the 1990s – in the midst of my international swimming career. I would get red, flaky patches on my elbows and back that seemed to be aggravated by stress and the chlorine. I feel like the chlorine definitely heightened the redness and itchiness so that made it tough. It also made it very dry.

2. I loved your advice to be comfortable in your own skin… how difficult was that for you at a younger age?
When you’re younger you worry about what other people think, but when you’re older that dissipates some. For me, it wasn’t so much about what it looked like, but it was more about what people thought about it. They would think it was contagious and that they could catch it if they were in the same pool as me or touched it.

3. How do you treat your psoriasis?
I think treatment really is a personal decision, and that’s why it’s important to work with your dermatologist to discuss ways to manage your symptoms. There are so many treatment options out there, but what works for one person may not work for someone else. So I suggest talking to your dermatologist about your options and figuring out a treatment plan together that’s tailored to you.

4. Why did you feel it was important to come forward and be such an incredible advocate?
I’ve lived with psoriasis for nearly two decades now, and I want people to know that the disease doesn’t have to hold you back from showing your true self. That’s why I teamed up with Celgene and Otezla to launch the SHOW MORE OF YOU psoriasis campaign. October 29th is World Psoriasis Day, and I’m hoping others will join me in raising awareness about psoriasis and celebrating the accomplishments of those living with it by sharing inspirational photos and messages on ShowMoreOfYou.com.

5. As a former competitive swimmer myself – I’m a big fan. My 4 sons swim competitively (for Seacoast) and I’ve seen you at the Brown University pool (as a swim mom!!). What does it feel like to have so many young swimmers to up to you as a hero?
Haha I think it’s the young swimmers parents who come up to me more! Not all the kids know me because my last Olympics was in 2008, but I enjoy talking with the parents who come up and say hi or have questions – it’s never a bother.