I know my kids love Shopkins… do yours?

If they do, they’re going to LOVE this incredible HUNT!!!!!

As most people know, Shopkins were the number one best-selling toy last holiday season. This season, for 5 lucky people, the ultimate gift may arrive before the holidays even start. Moose Toys, the toy company behind the collectible craze Shopkins™, is celebrating Shopkins fans and the fifth season of America’s favorite tiny toy with the first-ever Shopkins Golden Ticket Hunt.

You read that right, Moose Toys is sending five lucky golden ticket winners (and their guardians) on the trip of a lifetime!

Five golden tickets have been randomly hidden inside a Shopkins Season 5 2-pack, 5-pack or 12-pack across the U.S. So before shoppers wrap up those holiday gifts, they may want to peek inside! 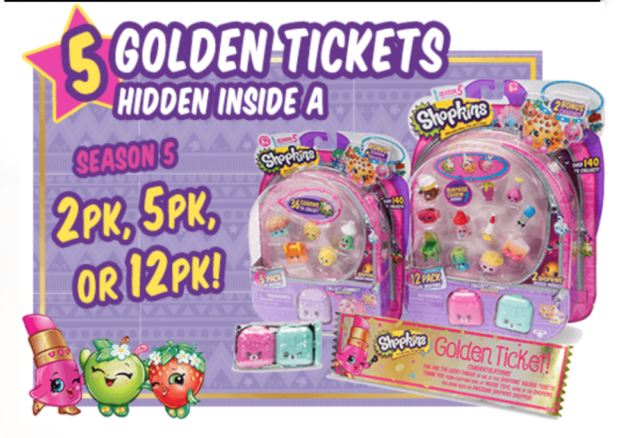 Lucky fans who find one of the golden tickets will be whisked off to the Home of Shopkins in Melbourne, Australia for a once-in-a-lifetime Shopkins experience. Upon arrival, lucky winners will be greeted by their favorite Shopkins characters, and the guest of honor at their very own private Shopkins Party, where they will get to meet the designers from the world of Shopville. Along with a trip, winners will also receive the Ultimate Shopkins Backpack, jam-packed with some of the best Shopkins loot, including items that have never been released in the U.S.

Check out all the details here!

I know the McClelland kids will be on the HUNT!!!