As you know, we’re a swimming family. Swim practice and swim meets pretty much rule our lives 11 months out of the year. I was a swimmer throughout my youth, so for me – it’s very familiar territory. I feel at peace on a pool deck, even now from the perspective as a mother and not a swimmer.

Swimming is not an easy sport. You’re logging long practice hours in the pool, swimming up and down a lane all by yourself. Even though you have fellow swimmers swimming IN your lane, you’re not engaging with them. You’re listening to yourself in the pool for hours at a time. As like every individual type sport, it’s the kind of sport where you really do get to know yourself.  Many people ask us about swimming and wondering how we invest so much time into the sport. It’s pretty simple – my kids love it. There’s nothing like seeing your kids enjoy something to its fullest and start becoming good at something that they love. They’re committed to it and have made great friendships. Swimming is a terrific skill to know and to have throughout your life, so the fact that they’ve really taken to the sport, well… for me, it’s icing on the cake.

This past weekend was our New England Age Group Swimming Championships in Vermont. It’s THE swim meet of the season. It’s THE meet that you train for from September till now. It’s THE meet you dream about and get excited about for months. William, Alexander and Benjamin all qualified to swim at this BIG meet this year. We were thrilled to see Ben qualify this season, his first time making these difficult cuts. Alexander swam his heart out this season to make it in 8 events (last year only making it in 2).  William made it in 16 events this year. We were all pumped and ready for a weekend of fast, fast swimming. We’ve become friends with so many other swim parents throughout the last couple of years, so we really couldn’t wait to see all these kids we know and love “perform” on their biggest stage of the season.

Alexander got sick the last week of January.  We were thankful it was a good month before his big meet. He had a hacking cough and slight fever, nothing that extra sleep, rest and medicine couldn’t handle. Within a few days, he was “back to normal.” As a mom of 5, I literally was waiting like a loaded gun for the other kids to get it, but nothing. I really thought we dodged a bullet BIG time. Like dominoes… when one is sick, they usually all go down. Nothing for 14 days… and then, the Monday night of February vacation (the 15th), William got out of the water at practice shivering like crazy. I couldn’t get him warm, he had the chills from head to toe. Thankfully it was vacation week, so he got to rest all week… but, as the week progressed, he started this horrible hacking cough and had a fever and headaches. He tried to go to practice on Sunday of that week, but his body was so tired. He knew with his big meet coming, he couldn’t afford to be out of the water. I just kept my mouth shut, hoping and praying all would be well for him because I knew how excited he was for the swim meet. His body slowly started to heal over the week of the 22nd… it was good to see. He didn’t push himself too much, but he definitely was able to hang at practice. And fortunately, nobody else had gotten sick (yet) in our family.

Thursday night I raced to Vermont with my father after being away so I could see the kids swim.  To say that Matt and I were excited is an understatement. I got a text from Matt as I was driving up saying that William’s had added time on his freestyle cut in the relay.

Then on Friday night, Benjamin’s cough went from a cough here and there to a non-stop hacking cough. Literally overnight.

And then Saturday morning Alex woke up and told me around 8:30AM he felt like puking. And he did. THANK GOODNESS it turned out to be a fluke and nothing more.

The weekend started off on a sour note and to be honest, it just continued for William and Benjamin. Alexander hit some of his best times, but had trouble in others. It was just a tough and brutal weekend for my guys. William really hit me the hardest. He works so hard. He cheers hard for others. He loves competition and strives on racing. Every time he went up on the block, he just didn’t have enough gas to get him back. I kept trying to explain to him that he had been sick and was just not 100%, but he just didn’t want to believe me. He kept saying, “I feel OK, Mom.” I wasn’t trying to find excuses for him, I was just trying to give him the facts. Finally on Sunday morning, I told him I wanted to scratch him from the rest of the meet. I couldn’t watch my son experience anymore heartbreak. If you know me in real life, you know I’m not a quitter. I don’t quit at anything. I’ve taught my children the same, but this took on a whole different level. I just didn’t want him to put himself through another day of what he was feeling and come up empty.

He refused to scratch. He just didn’t want to do it. He said that he earned a spot here and wanted to finish out the weekend.

He had his favorite event of the weekend up (50 yard Butterfly) on Sunday and he wanted to compete. The kids he was racing are his buddies and they are a fast freaking group of boys. I mean, fast. There’s no beating around the bush. These kids are friends on the deck and enemies in the water, it’s how it should be. That’s the competitiveness in all of them. It’s innate. You don’t stay in a sport this long and log this many hours to not care how you do.

This race would be his last race of the short course season, so we let him do it.

He didn’t do his best time, but he got 3rd on Sunday night in finals in that event.

The place doesn’t even matter to me. It was his determination and dedication and devotion to this sport and his team and his friends and to himself that got him in that water to swim those 2 laps. I’m telling you right now, I would’ve packed up and headed home. I would have used the out from my mom and dad.

I stood on the pool deck with tears streaming down my face knowing that that 50 yard butterfly was the most difficult thing for him to do, but he HAD to do it. And I got that. And we let him do it. The look on his face when he saw he would be able to stand on the award podium was a look I’ll never forget. Sometimes in life it’s not about the places or where you stand on a podium, it’s just about doing something for yourself. For hitting a personal goal. For making something happen that you just needed to happen.

The boys’ swim team has an amazing quote on the back of their tees – “Winning is about struggle and effort and optimism, and never, ever, ever giving up.” 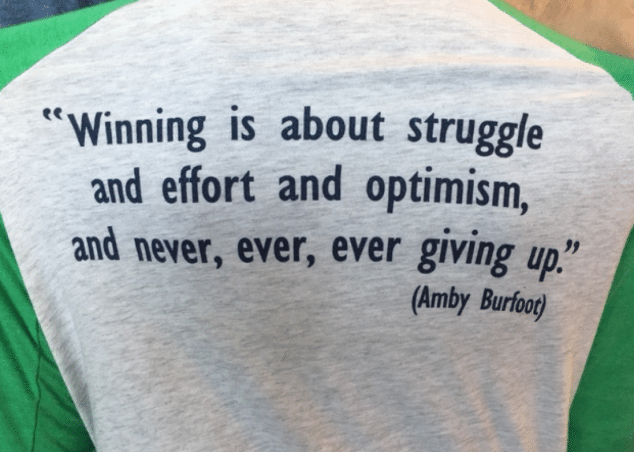 This quote was very personal for my sons this past weekend.

William didn’t give up.

Alex didn’t give up.

Ben didn’t give up.

If there’s something that I would love for them to take away from this experience is that they know how deeply proud I was of them all. I couldn’t have been filled with more pride. Even as I’m typing this, my eyes are filled with tears and my keyboard is a wave of water.

Yesterday morning the boys still looked exhausted and I was afraid they might have bronchitis, so I took them to our doctor.

Both William and Benjamin were diagnosed with walking pneumonia. Now – if I had had an inkling of a thought that they were that sick – they NEVER would have swam. Ever. That’s a whole different animal to deal with, but we didn’t know… and they refused to give up and they refused to leave the meet. Even on Saturday, William said, “If I leave, we won’t have a relay – and those 3 kids are depending on me.”

This experience – for me – brings up many, many emotions. I love my boys with my heart and my soul and everything that I have within my body. They are my life. I just wanted to share my inner thoughts today on the blog. I just wanted to acknowledge how much I love my sons and what great respect I have for them. I just want to share that I’m proud of them.  Mama bear proud.

Audrey Confidential: The Lesson of Never Giving Up was last modified: March 1st, 2016 by admin