When a grandbaby is under-the-weather…

When your child is not feeling well, many daily things might change up a bit (at least, from my Mama memory perspective), but rarely come to a screeching halt. As a Mom, perhaps of more than one child and work/job to maintain, the time and logistics elements become wrapped into each decision about caring for the not-feeling-well child.

But when a grandbaby is under-the-weather… well, blue, sunny skies and beyond are the things of note reached for — for the entire day.

Yesterday, I was caring for my littlest darling of 11 grandkids, nearly 2-year old Brian. This guy’s birthday is this Friday, and everything is supposed to be right on your birthday. Right?

Brian was on day 3 or so of a croupy cough. His fever had just broken, but the residual feeling of malaise was still upon his little body. He didn’t want to eat, even his favorite foods. He didn’t want to drink, and we all know how important liquids are to fighting off under-the-weather-ish things. He wasn’t up to playing with some of his favorite toys. And with the snowstorm swirling outside, taking him out to the library or playground, a walk or even a drive was out-of-the-question.

My little guy whimpered some. He gnawed on his binkie. He clung to me. But he was restless, even in his love-you-Grandma clinging.

He simply did not know what he wanted.

And shake-head rejected everything I tried.

He was breaking my heart.

What-to-do? What-to-do? Come on, Sharon, think, think. Think experience. Been Here, Done This. You’ve got this entire snow-swirling afternoon to try to find a peek of sunny, blue skies of over-the-weather.

I know how much Brian loves music. All kinds of music. He’s born into a musical family, but his ear for music is uncanny.

I turned on my laptop to try some YouTube favorites of his, but immediately was tuned into the live-streamed funeral Mass of our deceased local political figure, Buddy Cianci. There was a hymn being sung.

Brian turned toward my laptop and his restlessness stopped. His eyes and ears were glued to the images and the sounds of the hymn. A miracle? I think so!

His little body became so relaxed that I picked up my laptop and carried both he and it into my family room. I gently, carefully sat down and this happened… 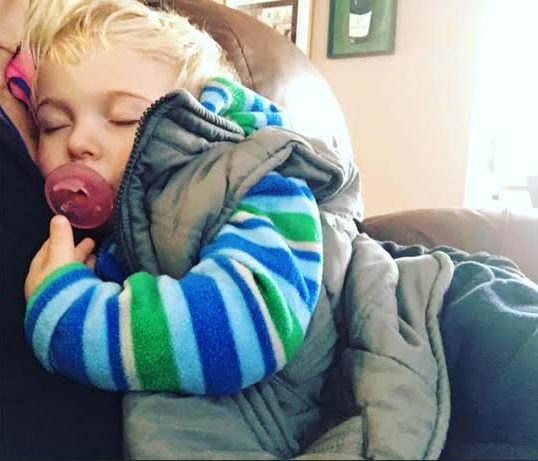 Two hours of this sleeping beauty. Hymns and Homilies with bits of news in-between.

When Brian awoke, things went back to grayer-skies of under-the-weather. I could still not convince him to eat or drink. I hugged him tightly and walked circles around my home.

At one point, Brian pointed to one of our very ornate lamps during one trip through our dining room. Brian has loved this lamp since the day Pop-up and I almost inadvertently picked up a pair of these Victorian-inspired out-of-our-box (hyphen queen!) lamps at a local thrift shop for almost nothing. There was just something, something about them… 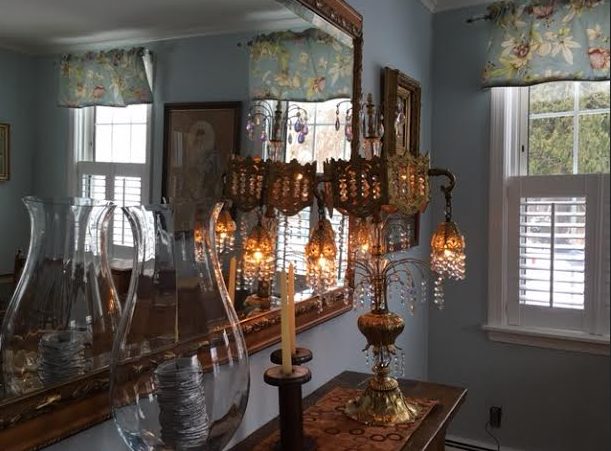 Brian wanted me to turn it on.

Of course, I did.

He loves the sparkle of the dozens of crystals among our mostly American primitive antiques and pastels of our art pieces.

THIS is why we’ve kept these treasures… because the grandkids love them and the crystals toss around afternoon rainbows throughout the downstairs of our home.

I brought Brian very near to the crystals and said, “You can touch them. Gently. Gently.” – 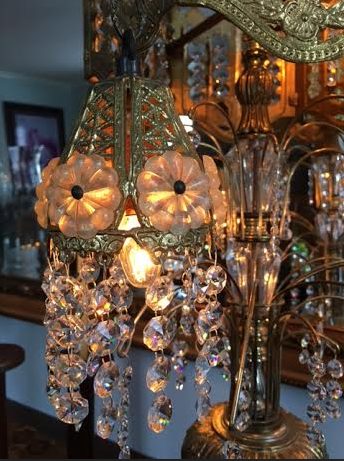 (As an aside, I never encourage my grandkids to touch these glass crystals, but yesterday with a little guy under-the-weather? Yep.)

This guy is all Boy, so to see him so gently cupping rows upon rows of those little crystals and watching the reflections color his beautiful eyes with rainbow hues… well, it made my heart sing and widen his lips to a smile. His eyes were dancing, too, reflections of some glory from wherever these lamps came from. I know they must have a wonderful story, maybe of a grandfather creating them from rainbows in his little workshop. I must write this story of the crystal thrift store lamps.

After a few minutes, I turned the lamp off.

I turned it back on, of course.

From that moment and all afternoon, Brian kept checking in on that crystal lamp in the dining room to make sure it was still on. I guess he didn’t trust me, LOL!

He agreed upon a bottle of milk.

He then wandered around from room to room, looking for his 3 pup siblings whom often come to my home with Brian. He was calling, “Rydie? Doggies?”  He looked under each table and in corners that they love. He wandered into our little back door entry area where they generally enter our home.

He stood on his tip-toes to peek outside to our yard, hoping to find them there. He loves his pups and is rarely without them.

And all along, I was thinking, “Uh, oh.” Because of the snowstorm, the pups were comfy at home.

Then the second miracle of the day happened.

Brian had found my Swiffer at the cellar door in search of his pups.

As you can imagine with 3 large black dogs, Brian sees his parents Swiffering, often several times per day… 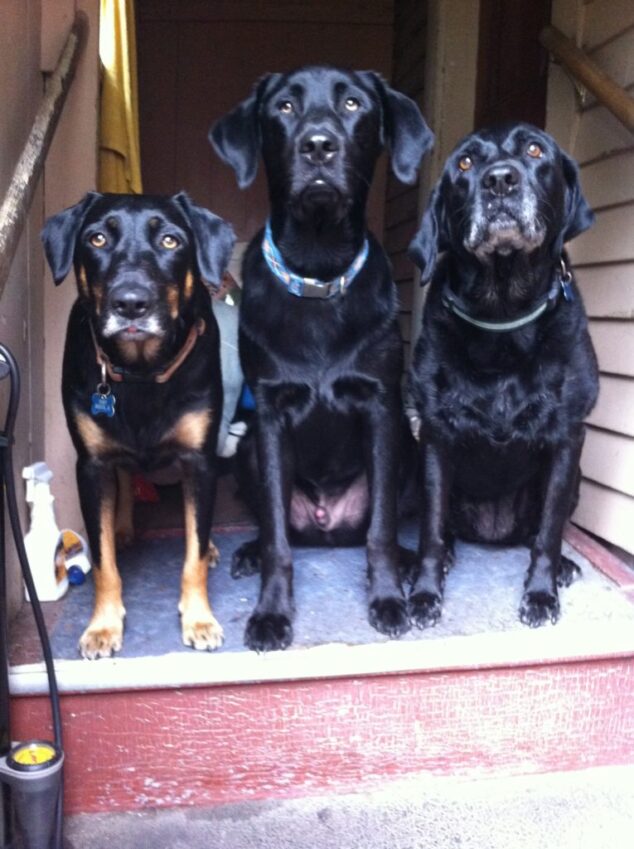 He knows where my cleanings stash is, too, and immediately went to that cabinet for the dry cloth refills. 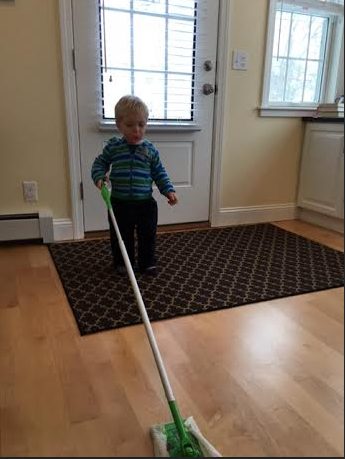 This guy, I think, forgot all about being under-the-weather and Swiffered to his heart’s content.

A couple of times, he headed into the dining room to Swiffer, but more so to keep Grandma in check on that crystal lamp case.

A few times, he stopped to watch the wind whipping around the swirling snow in the craziest patterns of wonderful… 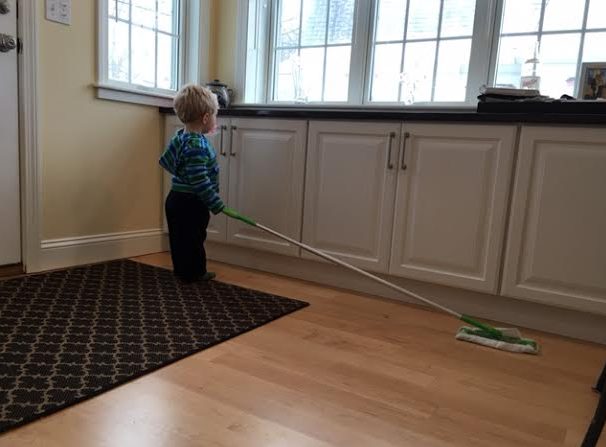 Brian was hungry. And thirsty.

Although the snowstorm was still swirling… blue, sunny skies and rainbows were beckoning.

My grandbaby seemed a bit on the mend.

When a grandbaby is under-the-weather… was last modified: July 5th, 2017 by Sharon Couto
SHOWHIDE Comments (0)

When a grandbaby is under-the-weather… was last modified: July 5th, 2017 by Sharon Couto