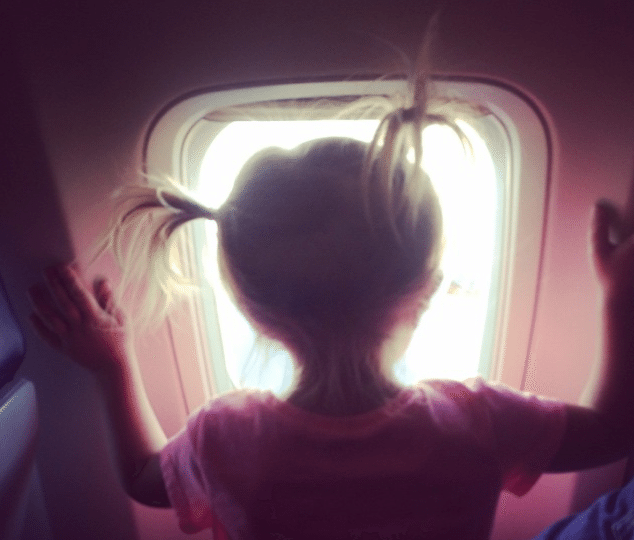 When I travel with the 5 kids, specifically by plane, it’s (for me) pure anxiety.

Will they be OK on the flight?
Will we sit together (when we’re on Southwest)?
Will Victoria have a meltdown once the plane goes up?
Will we be sitting near people without kids?
Will there need to be 100 bathroom trips on the plane?
Will Victoria need a diaper change mid air?

I mean, the list is endless for me of what if’s and other random questions.

Truly, at the core of family air travel, I’m more concerned with the people around me (and I know I shouldn’t always be!).

As the boys have gotten older, it’s become much easier. They literally get their iPads going and they’re fine. I don’t have to really worry about anything. The only thing that comes up for them is 2 things:
1) Spilling their drinks all over the seat (it’s happened).
2) Getting locked in the bathrooms (yes, that’s happened, too).

With Victoria right now, she’s our wild card. She doesn’t love to sit still for long periods of time, so there’s always that fear that she’s going to be loud or crying or kicking the seat in front of her or (well) just about anything that a toddler may do on a fight. We come in with bags of armor for flights… books, toys, play-doh, food, iPad games, movies, you name it – we have it. Only once have we really had to encounter a flight with Victoria where we just couldn’t stop her crying. We were flying from LA to Chicago and (I swear) she cried for 45 minutes straight upon landing. I couldn’t stop her. Matt couldn’t stop her. Even the flight attendants tried. Nothing would help. I was sweating buckets… even crying myself because I was so worried about her AND the people hating me throughout that crying spell. I kept looking up and worrying that people were going to yell at ME, but what could I do? I was trying my best to keep her calm and happy… nothing was working. I kept apologizing to people in front of us and behind us. As soon as we landed, I must have had 4 couples come up to me to see how she was doing. They weren’t bothered at all, actually… they were concerned and just wanted to make sure she was OK. It’s funny, I loved those 4 couples!

I flew home last night from Orlando sans kids. As you can imagine, every flight to Orlando is filled with little kids. I always feel for the moms and dads coming on flights with little kids because I know it’s not always easy. I know they’re probably boarding and praying for their children to sleep and/or just be occupied and happy. I always laugh to myself because not one parent gets on with a happy face… it’s always a look of stress and I get it.

There happened to be a crying baby on our flight last night right behind me. Honestly, I wasn’t bothered in the LEAST BIT. First off, it’s Southwest. You’re getting a cheap fare, so if someone is on the flight who is bothered by a crying baby, just remember you’re on the most economical airline to Disney. And second… yes, it’s coming from DISNEY. Expect kids. If there’s no kids, something’s weird and we’re living in an unusual universe. I felt so bad for this mom and dad because they were trying everything. Movies. Games. Food. Drinks. Toys. Books. You name it, they tried it. I would say the baby was about 12 months old. My heart just sank for them because I’ve been there and sometimes you just need to sit out the cry. They were taking turns walking up and down the aisle… which did help a little bit.

As we landed in Providence, I could tell they wanted off the plane ASAP. They were done. They were tapped. They just wanted to be home.

It was AMAZING to see the people passing them as we were all walking to the baggage claim. Everyone was asking, “How is she?”… the baby became “all of our” baby on the flight. Nobody was outwardly bothered by it. Nobody was upset and yelling at the mom. One lady passed her and said, “It’s harder on you than anyone!” As I got my bag and was walking to find Matt and the kids outside, I was able to get them alone… all I could say to her was, “It’s OK… we’ve all been there,” with a smile and quickly explained that I have 5 kids and nothing phases me anymore!

She smiled, chatted with me for a couple of minutes as we walked and said thank you.

We put so much pressure on ourselves as parents, it was nice to see people being so kind. It was nice to be on the other side, really seeing the reactions of kind and understanding people.

Crying babies on planes isn’t easy for anyone, but is it OKAY???

To the people who have an issue with it, fly private.

To the Mom with the Crying Baby… it’s OKAY! was last modified: February 24th, 2016 by admin
SHOWHIDE Comment (1)

To the Mom with the Crying Baby… it’s OKAY! was last modified: February 24th, 2016 by admin