I received compensation for my review of this product but all opinions are my own.

I’ll never forget telling the 4 boys that we were pregnant with another baby back in December 2012. They were so excited!

We had been talking about wanting to have another baby for a while at that point, so the fact that we finally were going to have one – it made them so happy! Since we had had 4 boys so close in age, we never had experienced older siblings being excited about the impending birth of another baby before. Our oldest William was 12 months old when his brother Alex was born, and then Alex was 18 months when Ben was born and then Ben was 14 months old when Henry was born! I don’t know what we were thinking, wink… wink! It was just a lot of babies in a short amount of time, but as tired as we were, we loved every single second. So, as you can imagine, having a baby in 2013 with 4 older brothers who were 5, 6, 7 and 8… well, it was really special to start seeing the pregnancy and baby excitement through their eyes.

The most beautiful part for me has been experiencing Victoria’s milestones with her brothers. They are just as invested and just as excited.

All of these firsts have been experienced with her older brothers cheering her on and making her feel like the most special little girl in the world. She’s funny because she’s a little fire cracker, but the boys… they just roll with it! 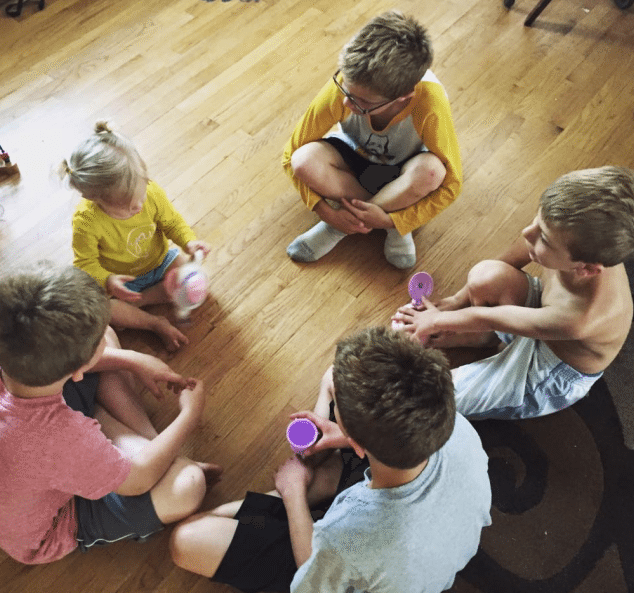 It’s also been a fun experience showing the boys certain things we did for them as babies on Victoria. I feel like it connects them to her more because they see history repeating itself, but this time – they get to lend a hand and help out, too.

When Victoria would get really fussy as a baby, we would show the boys how by giving her a soothing bath, it can instantly make her stop crying. They loved knowing that we did the same for all of them, too as babies! I always joke that when we had our oldest 2 sons in NYC, we didn’t have a tub! We had to bathe them in the kitchen sink!

When Victoria started teething, which was painful and the boys felt so bad about it, we reassured them that we used Baby Orajel™ Naturals on them and it would work on their sister too. We used Baby Orajel™ Naturals Teething Gel with the amazing soothing power of Chamomilla. We loved it for the kids because it’s a safe and effective teething pain relief. The boys felt so much better knowing we could do something to help her out when she was getting those teeth in!

When Victoria cut her knee pretty badly this summer from falling in our driveway, the boys played doctor with me and tended to her. I showed them how we clean out the cut, dry it off and pop a bandage right on the cut. I gave her kisses and hugs and the boys did the same. I swear they were more traumatized then her!

When Victoria needed “real” big girl shoes for the first time, I took her to the same shoe store I took the boys to when they were toddlers. The shoe store does a BIG to do about measuring and giving balloons out and making the kids feel special. It was adorable to see the experience through their eyes… as soon as we got home, I showed them the photos from their trip there as toddlers, too!

There’s just so much to share with older siblings and a new baby. I hope and wish that the bond they’ve created with her lasts forever. It really has been a treat seeing the boys enjoy and experience all the new beginnings with us along the way! I can only imagine the new firsts that are to come – dating, high school, proms, etc… I’ll let them live in the “dark” about all that stuff for now!