Our lives were rocked in January of 2012 when my husband found out that he had a cancerous tumor in his abdomen called a GIST tumor.

It all began that January 29th (2012) morning with my husband complaining of stomach pains, but not normal stomach pains… pain where he couldn’t even stand. My husband has a HUGE tolerance for pain, so this made me really, really nervous. I thought (without a doubt) it was appendicitis. We rushed him to the ER at our local hospital that evening… appendicitis was ruled out after the first cat scan. I was so tired that night, but I do vaguely remember them saying they were going to do another cat scan on him, just to rule out a few more things. Matt had sent me home while he was resting and waiting for the results to be with the kids.

Around 4AM that morning, he called me from the hospital… what he said changed my life forever.

“They found a tumor in my abdomen.”

WHAT!? I just remember bolting straight up and just saying, “WHAT?” about 10 times to him. I instinctively knew that I needed to stay calm, but I was an instant bowl of nerves from head to toe. My mother was with me that night, I actually do remember asking her as I was heading back to the hospital in a flash, “Do you think it’s cancer?” I never actually thought it could be or would be… but it was. We later found out that the reason he was in such pain was that the tumor had grown so large, it had poked a hole in his colon. That very day Matt had emergency surgery to remove the tumor. The doctor did an incredible job and got everything out. I remember him telling me post-surgery, “You just need to keep his spirits up and try not to let your mind wonder until we get the results from the lab as to what exactly it is.” He also told me (which scared me to death) that tumors of the size that were removed from Matt were usually cancerous.

To say I was a wreck over the next 2 weeks is an understatement. I was so beyond nervous for my husband… for us… for our family… and through it all, as the wife and mom… I was trying to keep it all together. Cry at night when everyone was sleeping. Find “safe” people to vent to and be scared to without judgement. It was a tough time. We did find out, like I said above, that Matt’s tumor was a GIST tumor. They are rare cancerous tumors and usually are diagnosed in men that are 60+,… regardless, it’s what Matt had and it’s what we needed to treat. If you’ve been following our story over the last 3 years, you know that Matt opted to go on a chemo pill called Gleevec. He takes it every night. With the Gleevec, there’s a less than 10% chance of it recurring… without it 25%… we liked the littlest odds best for our family. We opted to have Matt go to Dana Farber because they have an exceptional team of doctors there that Matt really just loves… and so, this journey started and has continued throughout the last 3 years.

Every 6 months Matt heads to Dana Farber for cat scans.

When he went for his routine one in November 2013, they found a fuzzy spot on his abdomen. So as to not take any chances, they told Matt to come back in 3 months to see if it had grown. It hadn’t, but it still worried me to the core. 6 months later, it was still there, but good news – the same size. Matt also had a large hernia growing from the initial surgery in 2012, so he made the decision to get the hernia removed/fixed and biopsy the fizzy spots last November.

We got the news the day before Thanksgiving last year that the fizzy spots being seen on the cat scans throughout the last year was just scar tissue. I’ve never been more happy to hear about scar tissue in my life.

I breathed again. I remember falling asleep that night and really sleeping. It was a good sleep… the sleep where you can go to bed without a worry kind of sleep. It felt good.

Yesterday Matt had his 11 month check-up cat scan. I was a nervous-nelly because it has been almost a full year, not to mention – I was away in Vegas for the ABC Kids Expo. I can’t quite explain the feelings I get before one of his scans. I just want it to be all right. I just want him to tell me, scan’s clear or all is good. I was walking around like a zombie shell ALL yesterday morning. I was trying to keep calm and breathe and know that everything is going to be OK… but it was tough. Not being here with him really was difficult for me. I had booked this trip before his got the date of this scan and well… you don’t cancel scan dates. You want the earliest they can get you in.

I got the text from his after waiting over an hour to hear from him that all was good.

In that very moment of hearing the good news, I just sort of crumbled. I breathed. I cried. I smiled. I must have told him I loved him a hundred times. 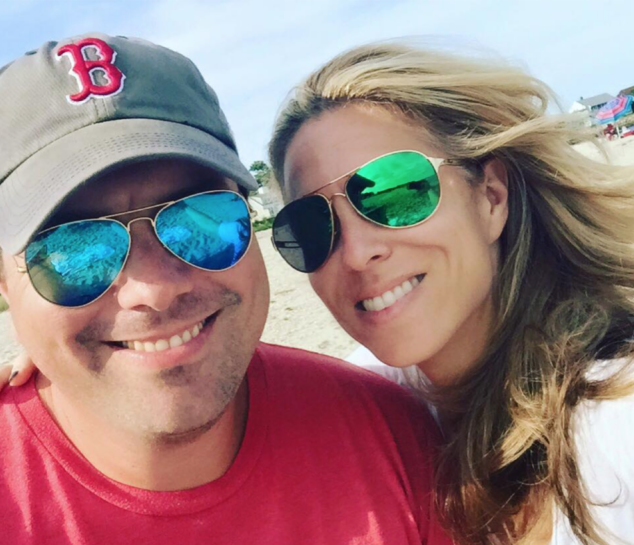 I’m going to be honest with you, I will never get used to cat scan days. Ever. They scare me. They worry me. I want to be OK with them, but my mind won’t let me. They are a scary day for me. Matt’s my life. He’s my rock. He’s the foundation of this family with me. He’s my everything. Our family doctor told me that I would eventually be able to separate the constant worry… and I’ve gotten better at not worrying and fixating on the constant.

I started this blog post not knowing where it was going to go… I just wanted to write, to clear my mind and to share.

And I want to send love and peace and hugs to all the families out there who are the support systems and advocates for their loved ones who may be going through something difficult. My prayers are with you all, too.

Thank you for listening and being here.