A Championship Swim Meet and an older cousin shout-out!

Each had some pretty major races facing them. First, to compete in this event, swimmers must “make” the New England Age Group cuts; meaning, there are time standards that must be achieved in swim meets throughout the season to qualify to swim at this championship meet. These qualifying cuts are no easy tasks.

I also have a 12-year old grandson, Andrew, who used to swim and swim quite well – but who decided to move over to other sports this year. But being “on-deck” is as natural to Andrew as breathing, so “on-deck” he went on Saturday afternoon to support his younger cousin Alex in the biggest swim of Alex’s weekend ~ the 9-year old Boys 50-meter freestyle.

Alex was seeded 6th in this event. Andrew told me that he was going to give Alex some advice. I wasn’t quite sure what this advice was going to be, but since Andrew has competed himself in some very competitive races over the years, I didn’t question it.

I just knew that Alex wanted to win it.

I knew that Andrew loves Alex and knows what he’s talking about.

But I also knew from experience in swimming spectatorship that this was no easy race to win.

When the 8 boys in the final heat lined up, there was Alex in lane 7. Lanes 4, 5 and 3 are the top seeds in a swimming race. They are the ones with the fastest times.

It was like slow-motion in my head, the swimmers taking their marks, the beep of the start.

I watched Alex dive in.

I saw him come up first.

I watched with beyond enthusiasm as Alex began to pull away from the top seeded swimmers from way over in lane 7, maintaining his position in 1st!

I don’t even remember putting my iPhone up to take photos. Seriously. I just must have intrinsically known that this race was SO, SO  special… 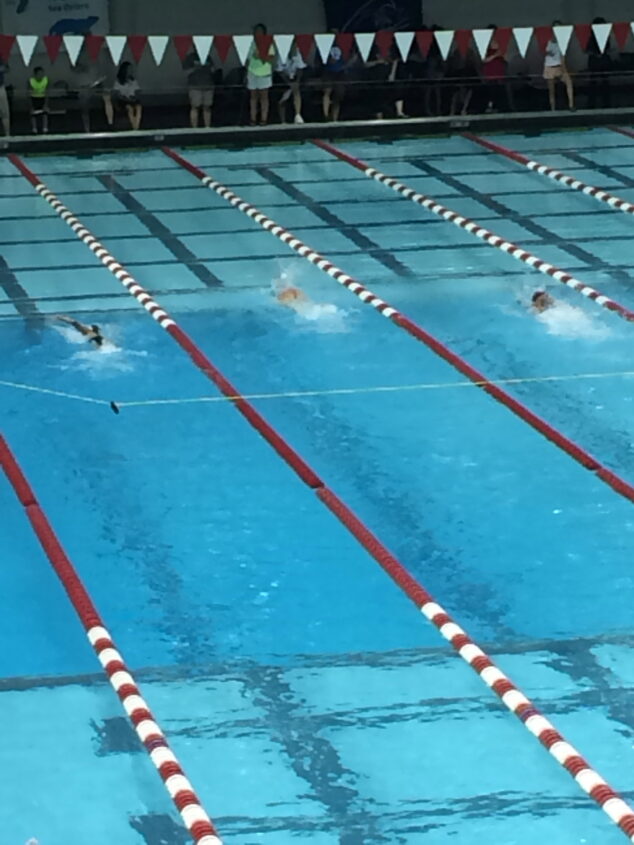 All of my family and all of the Seacoast Team spectators around me were roaring, cheering, yelling, jumping, “GO, ALEX!”

I also don’t know how, but I had the presence of mind to capture the results posted on the huge screen… 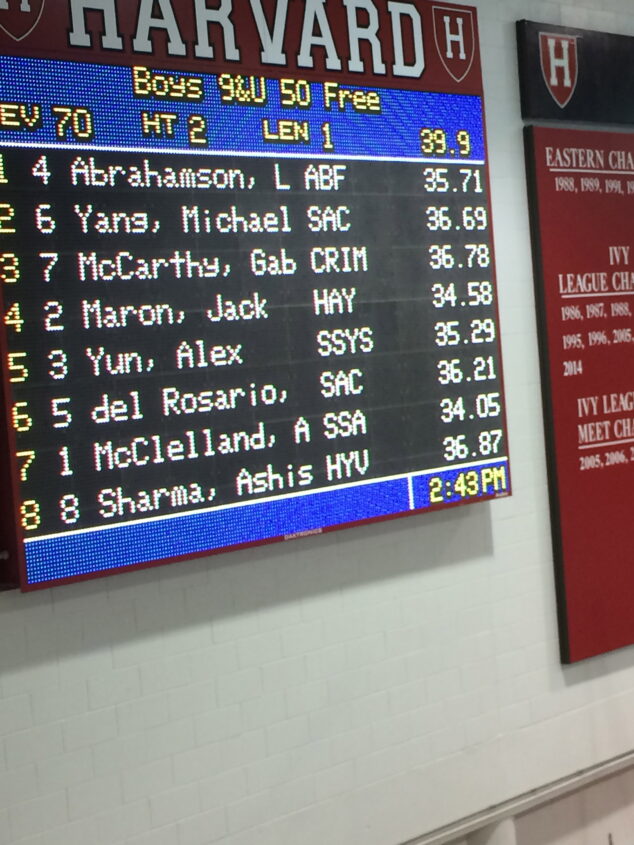 I just kept clicking away.

Photographs piling into my phone. Capturing these moments… 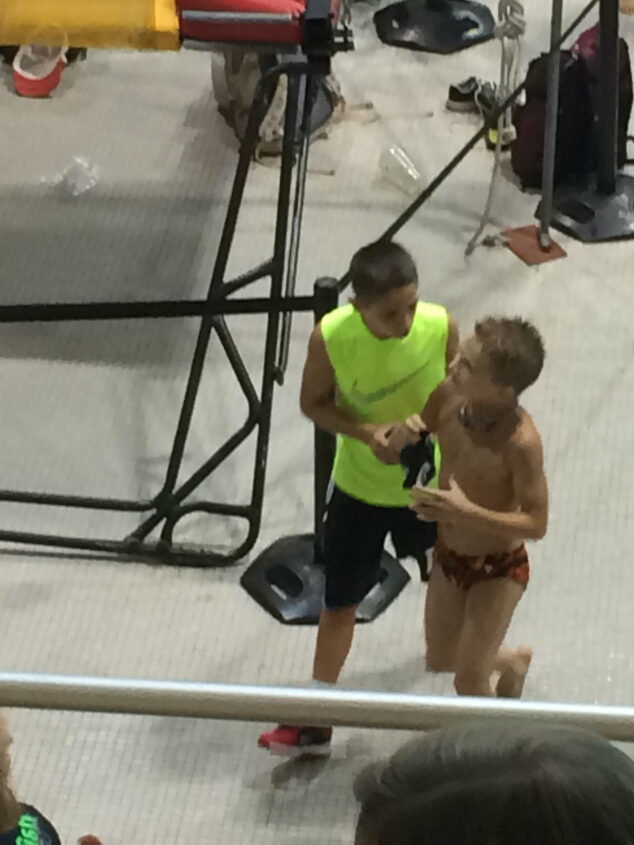 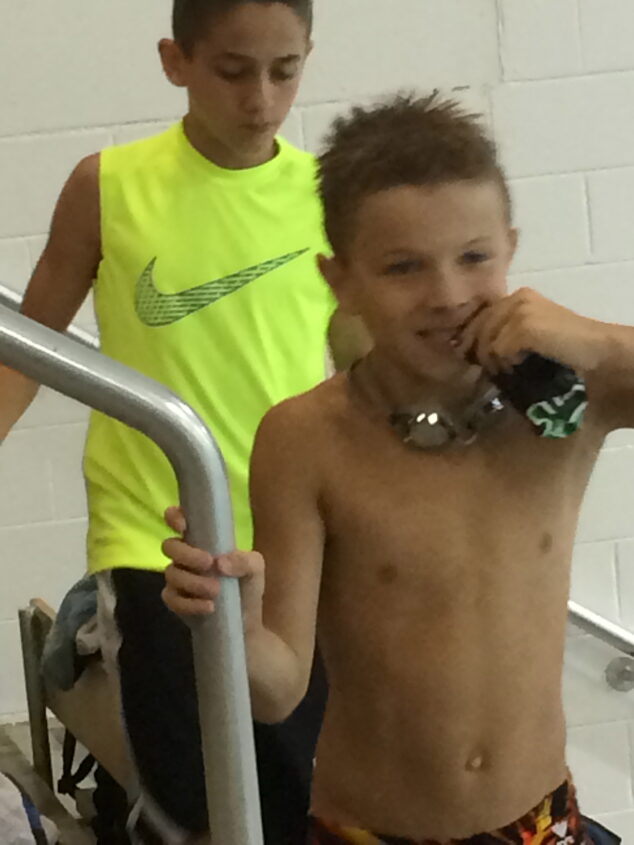 Alex and his big cousin Andrew right behind him.

All the way back to Alex’s excited coach! 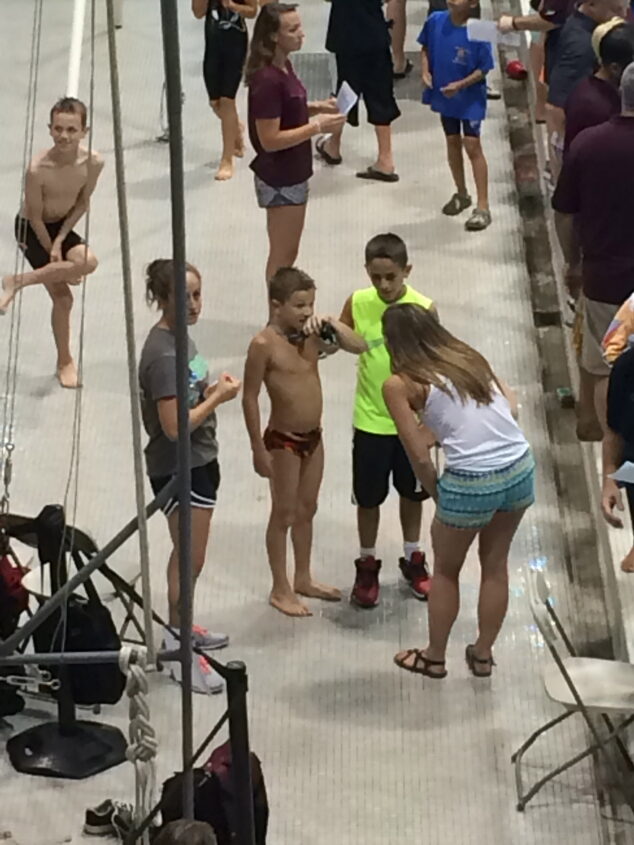 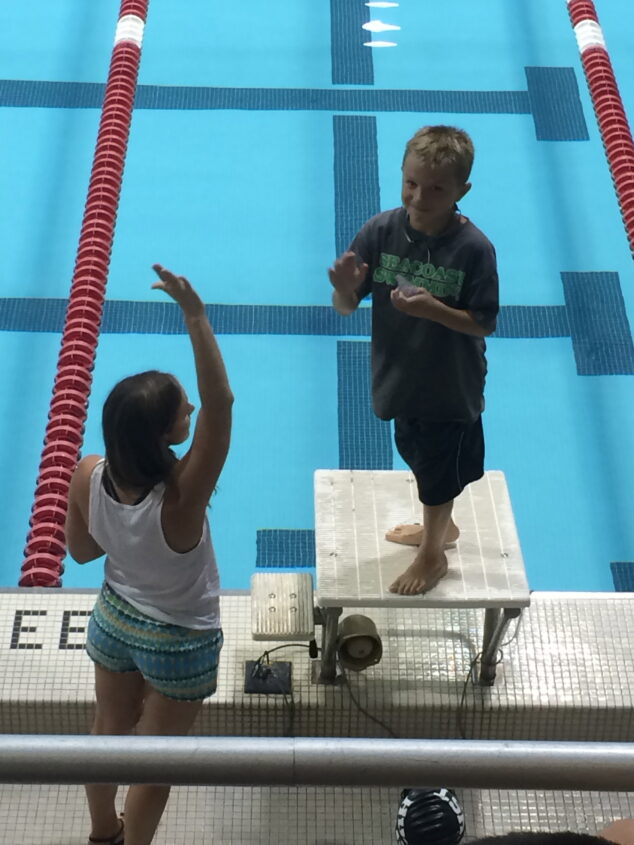 It wasn’t until later that I asked Alex what advice Andrew had given him down on-deck prior to his big race.

But coming from an older cousin who knew a thing or two about swimming, it was genius.

Alex would also tell me later that he didn’t know he’d WON. These kids come flying into the wall so quickly with such splashes, that it’s difficult to tell ’til the times post on the big screen.

It was Andrew who told Alex that he’d WON the race!

Because there was Andrew the entire time.

At the far end of those 50 meters, in neon green, being the best cousin ever…

Andrew waiting. Yelling. Cheering on Alex to that incredible win.

To this Grandma, 34.05 seconds of perfection, for 2 cousins!