Each TOY or GAME has a STORY.

Today, it’s the JUMP ROPE’s turn to tell its story ~ 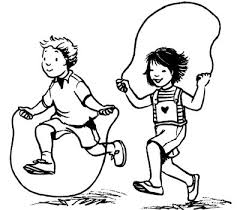 WHO invented the Jump Rope:  The first “Jump Ropes” were, in fact, flexible bamboo and vines.

WHAT is a Jump Rope:  A Jump Rope is a rope used in the game of Jumping Rope, also known as Jump Roping or Skipping Rope. The rope itself must be long enough to pass over the jumper’s head and under the jumper’s feet.

WHEN was the Jump Rope invented:  No-one really knows exactly when the Jump Rope was invented, but it has been traced as far back as the ancient Egyptians, the aborigines of Australia and the Chinese in around 1600 B.C.

WHERE was the Jump Rope invented:  As with many ancient toys and games, there is no one definitive where the first person took a vine or flexible bamboo and began to jump with it.

WHY was the Jump Rope invented:  Many historians believe that Jumping Rope was a training exercise for warriors.  The skill of jumping quickly and naturally was considered a great coordination advantage in both battle and survival.

It’s interesting to note that Jumping Rope was once a male-only endurance and stamina activity.

HOW do you play with the Jump Rope:  Jumping Rope traditionally involves 3 methods:  a) single rope; b) long rope with 2 turners;  and c) Double Dutch, where 2 ropes are turned in opposite directions.

Jumping Rope is still a favorite playground activity, but the 1970′s fitness craze elevated the Jump Rope to new heights, so to speak!

The Jump Rope is now used for endurance/stamina/footwork training in many sports… but it still remains a children’s favorite, too.

Get outside today with your kids & grandkids and bring along a couple of Jump Ropes!  Tell the boys all about warrior footwork as you sing little rhymes such as:

Cinderella, dressed in yella’, went upstairs to kiss a ‘fella. Made a mistake and kissed a snake. How many doctors did it take? (Count until jumper stumbles on rope)

#TeachThroughPlay ~ the “Story” of the Jump Rope was last modified: August 5th, 2014 by Sharon Couto