How to Teach Through Play ~ the fun & history of Tic-Tac-Toe!

Each TOY or GAME has a STORY to share with kids.

Today, the Game of TIC-TAC-TOE tells its story… 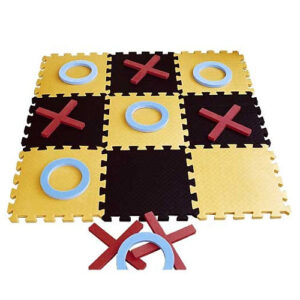 WHAT is the Game of Tic-Tac-Toe:  Tic-Tac-Toe is a game of strategy and tactics played by 2 players identified as marks X and O.  The “game board” is a 3 x 3 row grid, often hand-drawn on paper, where each player tries to be first to draw 3 marks horizontally, vertically or diagonally.

WHO invented Tic-Tac-T0e, WHEN and WHERE:  No one person is credited with inventing Tic-Tac-Toe.

Rather, the idea of the game has been traced back to the Roman Empire, 1st century BC, in a game called Terni Lapilli.  3 x 3 grids have been found on the surfaces of various things, but no X or O markings.  Historians believe that the Romans used rock or stone pieces on top to mark their places…

Still other research dates a game similar to Tic-Tac-Toe back to Egypt in 1300 BC.

HOW did the game Tic-Tac-Toe get its name:  Games similar to Tic-Tac-Toe have been played by kids for centuries, in every corner of the world.  Some of these games used piece markers that made repetitive tick, tack sounds when placed on a slate game grid.  Hence, tick-tack.  Now that’s an interesting name origin!

Grab some scraps of paper today, pencil in your 3 x 3 grids and get your kids and grandkids in on this 3,000-year old pass time.

Or find a Tic-Tac-Toe game, pocket-sized to giant-sized (like the one pictured above at Toys ‘R Us) to electronic and listen for the real tick-tack sounds… 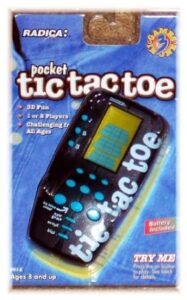 It’s all about the strategy, the fun… and quite a bit of learning.

And the best part is that Tic-Tac-Toe can be played anywhere!

How to Teach Through Play ~ the fun & history of Tic-Tac-Toe! was last modified: July 10th, 2017 by Sharon Couto
SHOWHIDE Comments (0)

How to Teach Through Play ~ the fun & history of Tic-Tac-Toe! was last modified: July 10th, 2017 by Sharon Couto