My son William read the full Harry Potter series in one month this past October.

He couldn’t put the books down.  As every mom knows, there’s something very special and powerful about seeing your child’s nose in a book. It’s the best thing ever. When I saw how mesmerized he was by this magical book series, I told my husband that we should bring him to Universal Studios to see the The Wizarding World of Harry Potter – Hogsmeade during the summer.  I had visited Hogsmeade the previous year while I was in Orlando for a press trip and I was dazzled by the magical world of Hogsmeade at Universal Studios, so I KNEW my William would feel the same way, especially after just finishing all the books.

Needless to say, when we told him… he was the most excited kid on the planet, he was excited to tell us that “Diagon Alley was going to be opening up at Universal Studios on July 8th.” He wanted to try and plan a trip around that. 🙂

Fortunately… we were able to do just that for William! 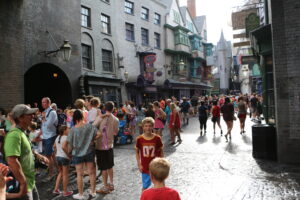 I’m telling you, it was the most INCREDIBLE experience.  If you’re a Harry Potter lover, you need to make it to Diagon Alley. You are brought into the world of Harry Potter. You create magic. You become a little wizard. Watching my 4 sons navigate through, as their mom… it was just a very special, special experience. 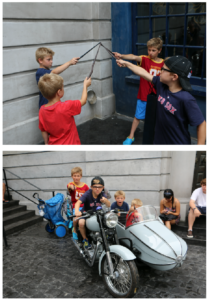 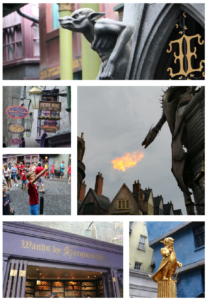 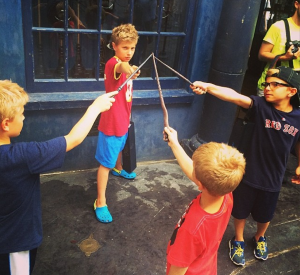 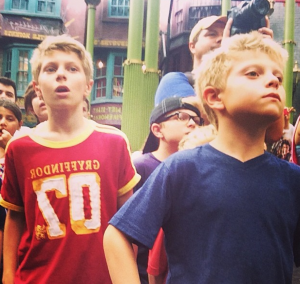 We dined at the Leaky Cauldron. We chose wands at Ollivanders. We experienced the thrill ride inside Gringotts bank. We entered the world and it was magnificent!

Here was our Diagon Alley experience…

Here’s some information about the attractions we experienced:

Escape from Gringotts Thrill Ride…
Enter Gringotts™ bank beneath the massive fire-breathing dragon at the far end of Diagon Alley™. Inside Gringotts™ you’ll walk through the bank’s grand marble lobby and see goblins hard at work. Then, get ready to take a journey through cavernous passageways that lead deep underground as you climb aboard Harry Potter and the Escape from Gringotts™.
This new, multi-dimensional 3D thrill ride puts you right in the middle of the action as you face the bank’s stringent security measures while navigating the perilous underground vaults. You’ll encounter Harry, Ron, and Hermione along the way, but you’ll have to evade the wrath of malicious villains Voldemort™ and Bellatrix as well as trolls and other creatures who stand between you and a safe return to Diagon Alley™.

Shops and Ollivanders…
See a wand choose a wizard at Ollivanders™ wand shop. Pick up magical jokes and novelty items at Weasleys’ Wizard Wheezes. Find all your wizardwear needs at Madam Malkin’s Robes for All Occasions. Bring home a furry, feathered, or scaly creature from the Magical Menagerie™. Search for supplies at Wiseacre’s Wizarding Equipment. And gather all your gaming gear at Quality Quidditch™ Supplies.

These were the 4 wands our boys’ picked out…

My Alex was CHOSEN at Ollivanders and it was the coolest thing to see!

It was the coolest trip for the boys! They enjoyed every single second of it all! 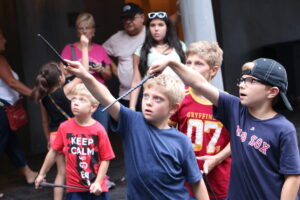 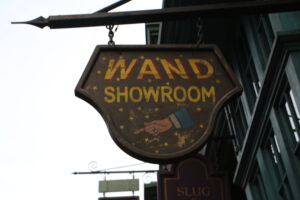 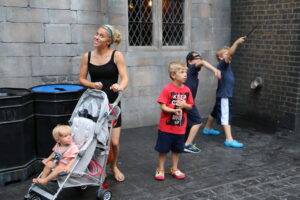 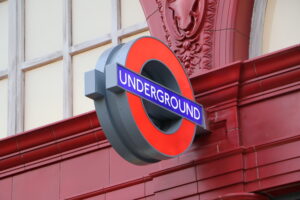 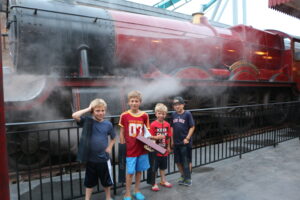 Disclosure: I reviewed Universal Studios and received tickets to the parks. All opinions are 100% my own.