I’m dividing my Eagleman 70.3 Ironman Race Review into 3 parts, because it’s just like the race itself:  SWIM. BIKE. RUN. I hope you enjoy it!

I’ll set the SCENE for you: 5:00 am, June 8, 2014. I’m in the bike corral of the 2014 Eagleman 70.3 Ironman, a race I’ve been training for and contemplating for 18 weeks. Many of the 2,800 competitors are arriving, arranging their gear at their bikes, waiting for the Swim waves to begin. Over the loud-speaker, the race announcer is making an announcement. It went something like this – Because the temperature of the Choptank River has exceeded 76 degrees this morning, today’s swim will be a NO WETSUIT swim.

No what? My brain cannot process.

I’ve never swum open water without a wetsuit. My brain begins to process the one element I know at that moment – panic.

1.2 miles in this big, wide, impossibly overwhelmingly river – without a wetsuit? I see my husband Barry just outside the bike corral and I burst into tears.

I think I remember babbling. But the jellyfish. (Alleged jellyfish, or not. All my mind saw were jellyfish.) I can’t do open water without a wetsuit. And the jellyfish. And the route takes us way out toward the bridge… 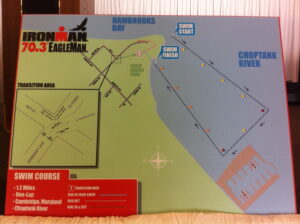 Barry, in his always comforting and kind way, was saying, “You can do this. I know you can.”

Now, for a little back story of my life as a swimmer.

I’m not what anyone would call a swimmer.

I took swim lessons as a kid and learned the basics of how to stay on top of the water and even move forward. But that’s about it. My husband Barry basically sinks (sorry, Honey!).

Our 4 kids, on the other hand? Barry and I had all 4 in swim lessons very early on. They progressed through the YMCA Progressive Swim Program and became confident swimmers. Our oldest son, Keith, went on to become a lifeguard in high school (nice gig!) and our two daughters developed into competitive swimmers.

Now, 8 of our 11 grandkids are, or have been, competitive swimmers.

So… I’ve spent a lot of time on pool decks!

Spending time on pool decks means that something actually creeps in about swimming development, stroke style, technique, endurance and love of the sport. Swimming is a beautiful sport. A healthy sport. A very competitive sport.

When I decided to dive into the triathlon world 5 years ago, at age 56, I had zero knowledge of running, zero knowledge of bike racing (didn’t even have a racing bike), but I had a pretty good idea about what I had to do to learn to swim in open water.

I knew in addition to panicking, I had to get myself to my local Y and re-learn how to swim – efficiently, effectively, endurance oriented. I began with a lap. Added two or three more, looking very much like that fish out of water image. Then I was at ten and twenty laps. I had to build up to 1/2 mile steady of steady for my first attempt at a triathlon, in open water, in the Atlantic Ocean of Cape Cod.

I watched my grandkids. I asked their advice, even though my oldest granddaughter was only 8 years old at the time. I practiced. (I didn’t take lessons because I just couldn’t fit that commitment into my schedule.) I got stronger. More efficient. More effectively moving through the water. Gained endurance. And more importantly, some semblance of confidence amid the paralyzing fear of leaving the safety of 25 yards of pool to the wide open world of ocean.

I showed up at my first Tri with a wetsuit borrowed from my daughter-in-law, Nicole. I tiptoed into the open water. And I just let all my fears go. I felt safe and buoyant (key word, here) in that borrowed wetsuit, and wonderfully free in that choppy water. I stayed far on the perimeter of the race markers so as not to have the other competitors crashing over me, as I had heard is rather normal.

I was hooked on triathlons.

My biggest triathlon challenge prior to Eagleman 70.3 was Providence Amica 70.3 in 2010. I did this race with my son Keith, daughter-in-law Nicole and my daughter Jane. See the wetsuit? By then, I had my own wetsuit and oh, boy was I smiling (left) at the end of that straight out 1/2+ mile into the ocean in Narragansett, RI and same distance back… 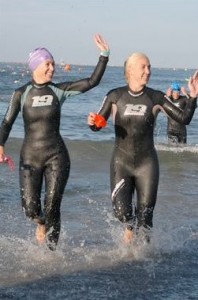 Oh, how I love my wetsuit. I feel so attached to it, you might say.

This is me this spring, training for Eagleman in the beautiful, choppy, cold little harbor in my hometown of Bristol, RI… 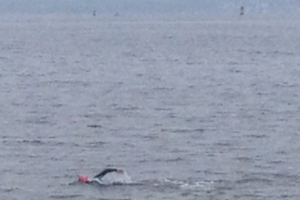 And now back to Eagleman 70.3, on that hot, water-temp 76+ degrees Sunday morning in Cambridge, MD on the Choptank River…

Barry and I walked down to the Choptank River where competitors were already beginning to gather for the waves of swimmers. The elite men and women would be going off first, then my wave… or more to the point, my intended wave.

I just stared at that river. How could I let this river win? I thought of my 11 grandkids and how they dig deep to compete and put fear aside to swim a 100-butterfly or face a 14-year old fast-ball pitcher at 9 years old or dance the most exquisite ballet solo in an arena of hundreds or run full-out balls-to-the wall with a basketball, soccer ball, lacrosse stick with competitors on their backs. Barry called to me at that moment and snapped this photo… 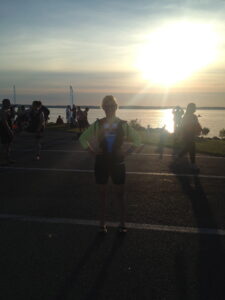 Hands on my hips I said F-you, river. I’m gonna swim the race I came to swim.

I handed Barry my sweatshirt. He said it again, YOU CAN DO THIS and gave me a big hug. I walked to my wave of light-blue capped women in the tri-gear that I’d be swimming in (looks like someone else was getting a last minute hug, too)… 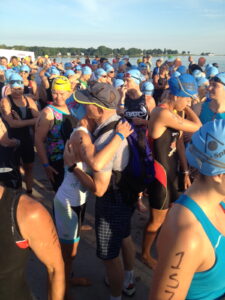 Waving. Yes, I can do this. 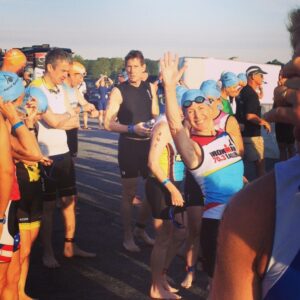 The beginning of our wave, in photos Barry captured that are so exquisite, so magnificent, so ethereal – a gift, really, to have been part of it… 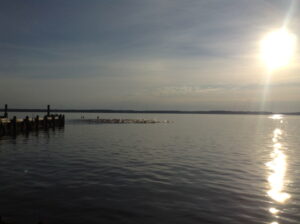 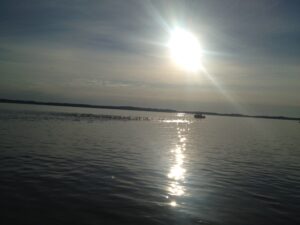 I hit the water and immediately felt calm and confident. I felt safe and even buoyant, without my wetsuit. I felt wonderfully free, just like on my first swim of my first Tri. This time, though, I stayed on the inside perimeter of the race markers because I know the feeling of those crashing arms and legs and fingers of strong racers in waves after mine. No fear.

I didn’t even think about jellyfish. I thought just about my Swim and the beauty of the morning and that I was F-ing doing it. The return route brought us facing the rising sun, and each time I breathed or sighted, I soaked in that moment of sun.

Then I was done… 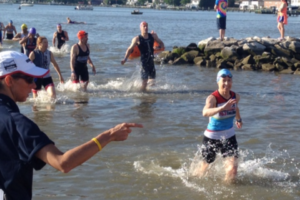 I saw Barry at the water’s edge and just couldn’t stop smiling.

Now on to the bike, and with a Swim story to tell my grandkids about Grandma facing a great, big fear – head-freaking-on.