My Mom’s Letter to Santa is dated December 12, 1931… written in the careful penmanship of a little girl dazzled by Christmas and Santa Claus himself-

There is one treasure in my home that is beyond measure – my Mom’s handwritten letter to Santa, dated December 12, 1931.

I first wrote this post in 2008, re-posted it in 2009 and 2012… and am re-posting it again because it is my favorite Christmas story! Enjoy the magic of the words and the BELIEF of my very own Mom, Rita, when she was a 6-year old girl dreaming of Santa.

This is how the Letter came to be.

My mom was born and grew up in Brighton, Massachusetts. She was the second child, and oldest daughter, of Edward and Mary Burke. Ed and Mary would go on to have 7 children, 2 boys and 5 girls, but in December of 1931 Rita was the adored 6 1/2 year old daughter of my grandfather. Edward was a fireman in the city of Brighton. My mom remembers him wearing his uniform. She remembers him fighting fires. She remembers his pride in his profession. But safety was different in those days and my grandfather succumbed to lung cancer, after a long battle, when my mom was 18 years old.

This is where the Letter to Santa comes in. When my Nana was given the contents of her husband’s locker at the Brighton Fire Department, there was a letter among his other items. The letter was written from his little girl, Rita, to Santa… dated December 12, 1931.

In that letter, a little girl asks for what little girls today may ask for – A doll with long curls. A bathrobe and slippers. A raincoat and hat. A set of aluminum dishes. (Well, maybe today a little girl wouldn’t specify “aluminum” dishes!)

My grandfather had kept that letter safe for 12 years. I can picture him reading that letter again and again. From what I have heard of my grandfather, I can imagine that he worked as hard as he could to make his little girl’s wishes to Santa come true.

In 2001, I rediscovered this letter in my most special box of things. I had the letter and the envelope framed. And I bought each of the items for my mom. (Even the aluminum dishes, which were not easy to find!) It is the best gift Christmas gift I have ever given to anyone. Ever. And I’m willing to bet it’s the best gift my Mom ever received.

My Mom told me that her biggest wish is that I have the framed letter and envelope in my home, as a constant reminder that wishes to Santa do come true. Even if it’s 70-some-odd years later…

The Letter- from “a good girl” -Rita Burke 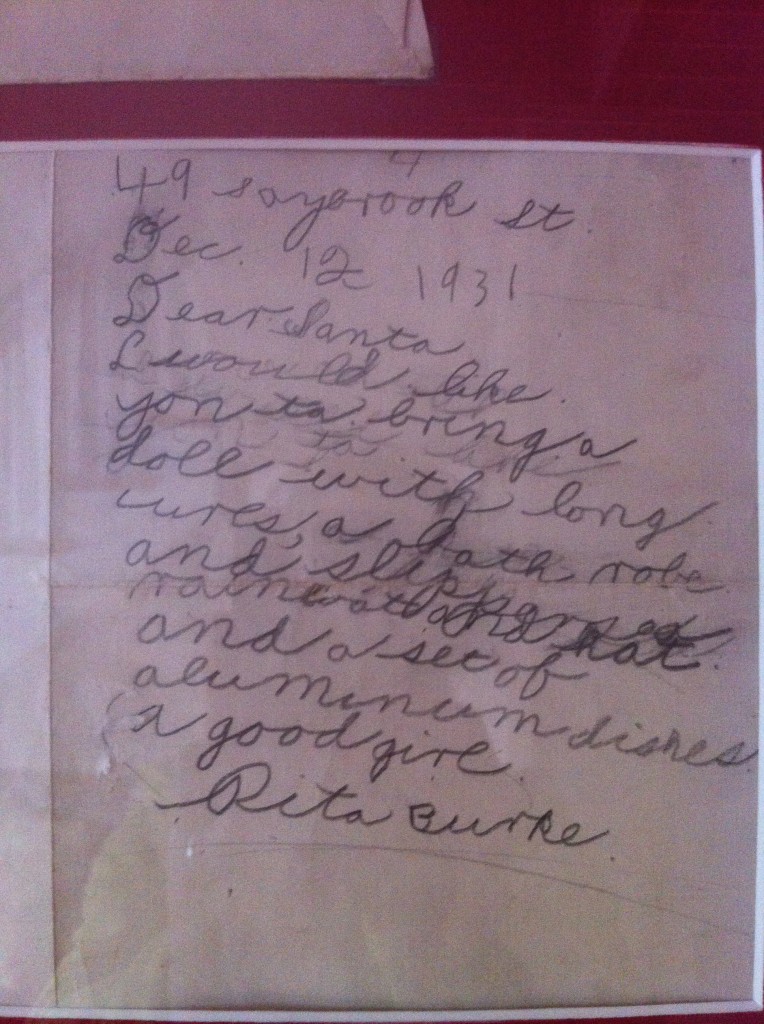 The Envelope- in my Nana’s handwriting, with names/notations/Christmas List scribbled on the flap- 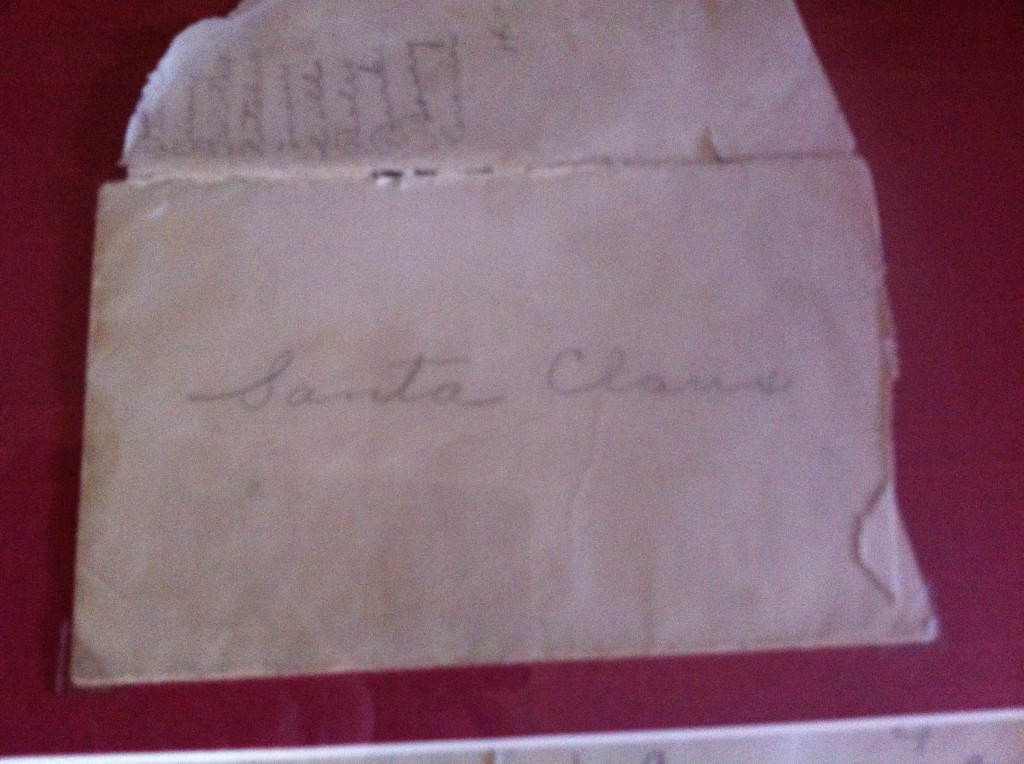 The Masterpiece!- including a discarded first draft- 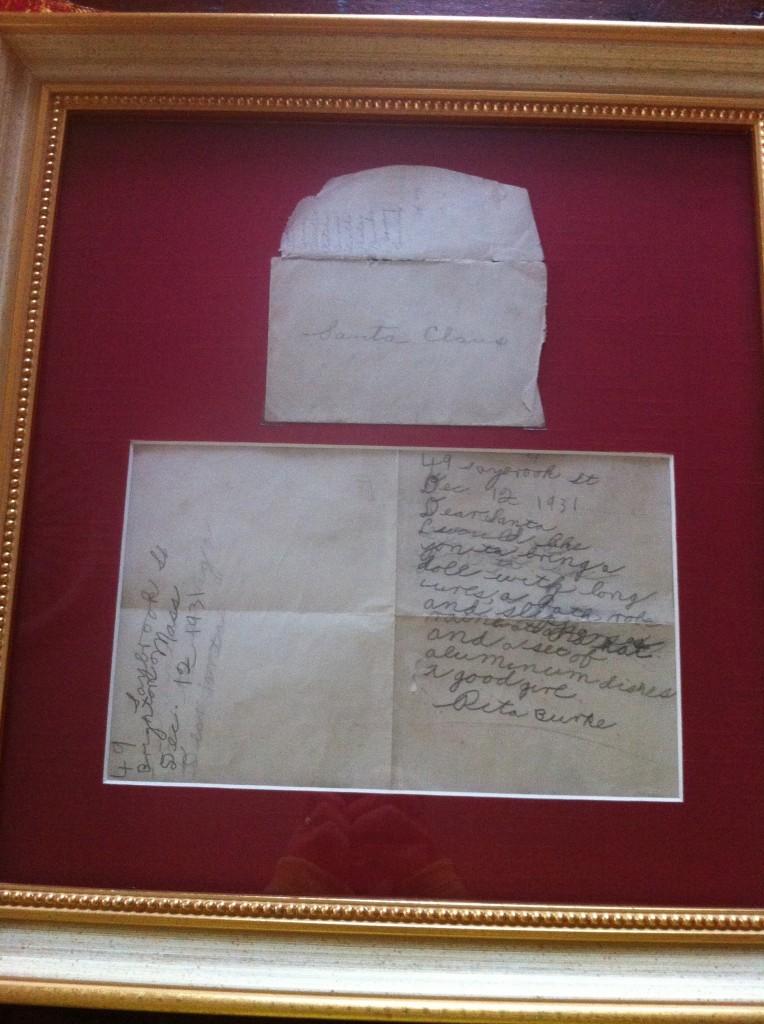 For me, this letter is a reminder of great love – the love of a Daddy for his daughter.

A love that truly has no end.

I’m even willing to bet that Santa pops down my chimney each Christmas Eve to take another peek at his Letter from Rita Burke.