Some stuff about turkeys…

There’s a playfully clever children’s book, I’M A TURKEY, written and illustrated by Jim Arnosky, that’s also the lyrics to a delightful song about turkeys…

The story/song is about a turkey named Tom who lives in a flock of 102 turkeys, including his Mom, Dad, brother and sister.

Tom and the other turkeys talk turkey, fly, strut, watch out for predators, multiply and wish to know you!

What we discover in I’M A TURKEY is a personal look at Tom the Turkey’s life, characteristics and habits.

But is there more gobble-gobble about the turkey in real-life ?  Here are a few little tidbits to pass along to your kids/grandkids to combine literature and life: 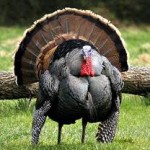 – A male Turkey is called a Tom, but is also referred to as a Gobbler.

– The turkey is a very well-known bird in North American, Mexico and parts of Europe.

– Benjamin Franklin wanted the turkey to become the United States’ National Bird.  (The honor goes to the Bald Eagle.)

– Domestic Turkeys and Wild Turkeys are different.  Domestic turkeys are raised to consume, bred to have white feathers, weigh more and cannot fly.

– The distinctive flap under the turkey’s chin is called a wattle. The Tom’s wattle is red and larger than the Hen’s.

– The Tom is also larger, darker and more iridescent that the Hen, who is generally more brown in color.

– The Tom generally has a white-crown on a red or blue head.

– During breeding season, the Tom displays his full fan-tail and struts his stuff to attract a Hen.  The Tom may also add gobbling and beating of his wings.  The Hen does not strut or gobble like the Tom, but she may cluck.

– Courting begins while the turkeys are still living in large flocks, usually in late February.

– Turkeys do not mate for life and Toms do not help in nesting or rearing their Poults.

– The Hen prepares her nest in the woods and lays as many as 18 eggs.  A Hen is able to recognize her young.

– Flocks of turkeys center around places of abundant food supply.

– And yes, Wild Turkeys can fly… up to 55 miles per hour, in fact!  But their flights are generally short.

Ah. The Turkey in real-life.

Reading the story of the Tom the Turkey and his flock in I’M A TURKEY with your kids/grandkids, with a little knowledge of the turkey in real-life, gives you so much to discuss… and also gives your kids so much to think about as they embrace the literature.

The book I’M A TURKEY gives us a great opportunity to talk with our kids about America’s most well-known bird away from the dinner table.

Or, perhaps at the dinner table!

Have a Happy Thanksgiving!

Some fun stuff about Turkeys for your kids/grandkids! was last modified: November 27th, 2013 by Sharon Couto
SHOWHIDE Comment (1)

Some fun stuff about Turkeys for your kids/grandkids! was last modified: November 27th, 2013 by Sharon Couto