A Big Band Runner, a Bottle-Washer at Narragansett Brewery and now an Angel – Happy Birthday, Dad… 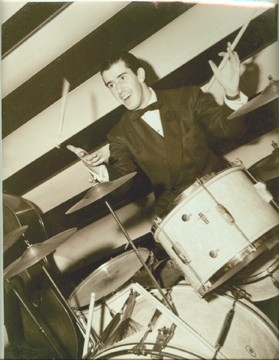 My late father-in-law, Joseph Soares Couto, was born in Providence, RI, the youngest, by many years, of 4 children. An older brother had died as a child, but two sisters doted on “Little Joe” like he was the only child ever born. I have been told this by many, many people. As a very young child, Joe had an interest in music. He was given lessons in playing the drums, and the rest, as the story goes, is history. Joe became a local legend, and by high school graduation, he had been offered a college scholarship. This was no small feat for a kid whose parents had immigrated to the Fox Point section of Providence from the Azores.

But Little Joe had bigger plans. New York City. He went and he played with the best of the Big Bands, returning only to Providence to court his girlfriend, Florence.

After Flo and Joe were married, they headed off to New York City together. These would be the years that Flo would talk about with such awe for the rest of her life. The City. The nightlife. The musicians. The excitement. But the War, and responsibilities back in Providence, forced them to come home. Joe played lots of “gigs” locally, but when Flo was expecting their first baby… well, Joe was given “the lecture” by family and friends that he had to find a “real” job.

He did. By day, Little Joe washed beer bottles at the Narragansett Brewery where his Dad worked. There, he was a guy who washed bottles for a paycheck. By night, Joe entertained. Flo never, ever let his dream die. She would wait up for him until 1:00 or 2:00 am each night he played, always with a bedtime snack. Joe did this for decades. Washing bottles by day in his green uniform… making his drums come alive 3-4 nights a week in his black tux. Even after Joe retired from the brewery, he played his music until age 80, when he couldn’t carry his drums anymore.

When I first met Joe, I was kind-of surprised. My husband Barry is very demonstrative and very affectionate. Joe wasn’t. He was a “Hi. How are ya?” kind of guy. He didn’t smile easily. And Flo pretty much had to tell him what to do. “Hug her,” she’d say. Or, “Help your son carry those boxes.” Maybe all those years of being doted on just left him a bit… lost in the giving department.

But the first time I saw Joe on his drums, I couldn’t believe he was the same man. Joe laughed. He swayed. He tossed his sticks in the air. He made the music come alive. He was born to entertain. My husband explained his Dad as, “That’s just the way he is.”

I grew to love Joe very much. We had a perfectly nice relationship. I began to hug him, and he hugged me back. My Dad had died when I was 22 years old, before I met Barry and his family. I called Joe “Dad” and I know he loved it. He actually told me once that he loved me. It was the day Audrey was born, prematurely, and he came to see her in the Intensive Care Nursery. I will never forget that moment. This is a man who had 3 sons. A man who didn’t have girls crawling on him or combing his hair or begging for money for a prom dress. He was tough in many ways… and one thing he ALWAYS said to his children was, “Four years of college and you don’t know how to… (whatever it was at the moment).” It could be that Barry didn’t store the lawn furniture in the garage for the winter. Or that I ran out of gas. We’d always laugh out loud and say to him, “Dad, we didn’t take ‘storing lawn furniture’ or ‘filling up with gas’ (or whatever) 101 in college.” This is the one thing I remember most lovingly about Joe.

And one thing I do know is that Joe is still drumming. Still laughing. Still swaying. Still entertaining.

Happy Birthday, Dad! I love you!

A Big Band Drummer and a Bottle-Washer at Narragansett Brewery – my late father-in-law. was last modified: November 27th, 2014 by Sharon Couto
SHOWHIDE Comments (2)

A Big Band Drummer and a Bottle-Washer at Narragansett Brewery – my late father-in-law. was last modified: November 27th, 2014 by Sharon Couto