Back on June 5, 2013, when I pressed my little return key and officially registered for the Providence Rock ‘n Roll Half Marathon 2013, I felt like kinda like Tom Petty… you know, I Won’t Back Down –

Hey baby, there ain’t no easy way out
Hey I will stand my ground
And I won’t back down –

It was a kind of full circle thing for me, this running in Providence, because 5 years ago, as a spectator at the 2008 Providence CVS 5k Classic, there was one moment when I decided that I, too, wanted to run.

I had never run.

I began running that very day… exhausted, around a short block near my home.

Five years later, I was ready to accomplish a Bucket List item – a Rock ‘n Roll Half Marathon. This one through the streets of a city I love and I’ve called home – Providence!

I had my work cut out for me with all of those Providence hills. But I wasn’t backing down. Nope. I was heading up them thar hills in a Kid Rock kinda way…

Armed with my Training Program and personal notations and early weeks skipped because a big, solid brass telescope had fallen on my left foot. Don’t ask… 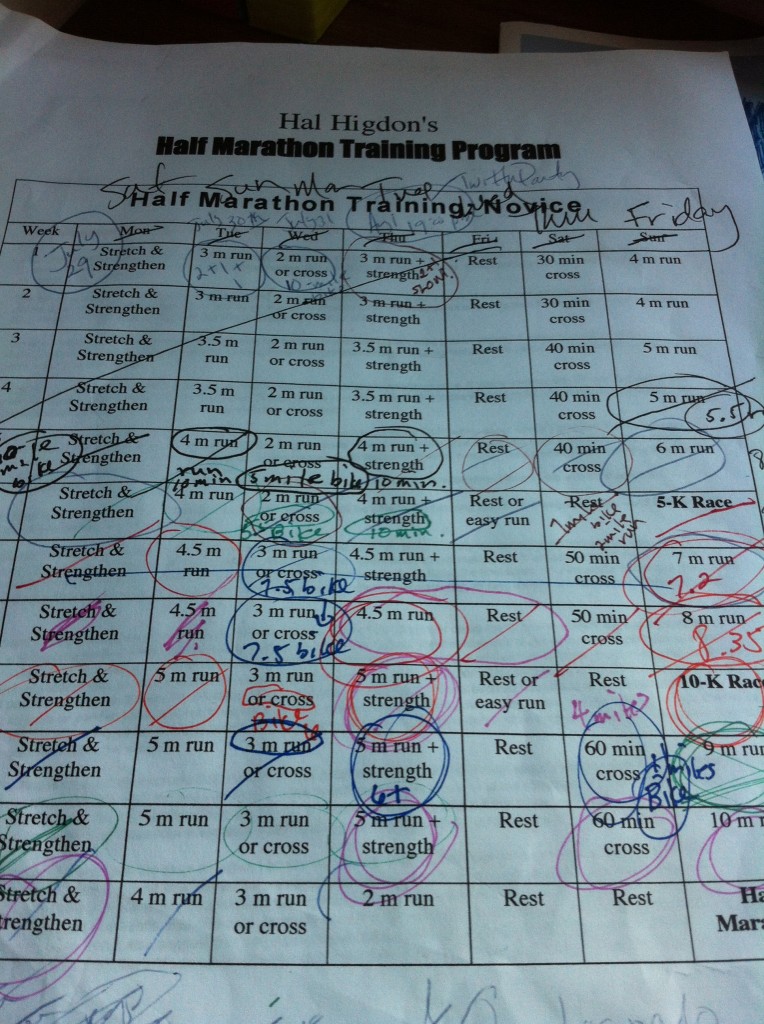 And suddenly, it was September 28th, the day before the race – Expo day… 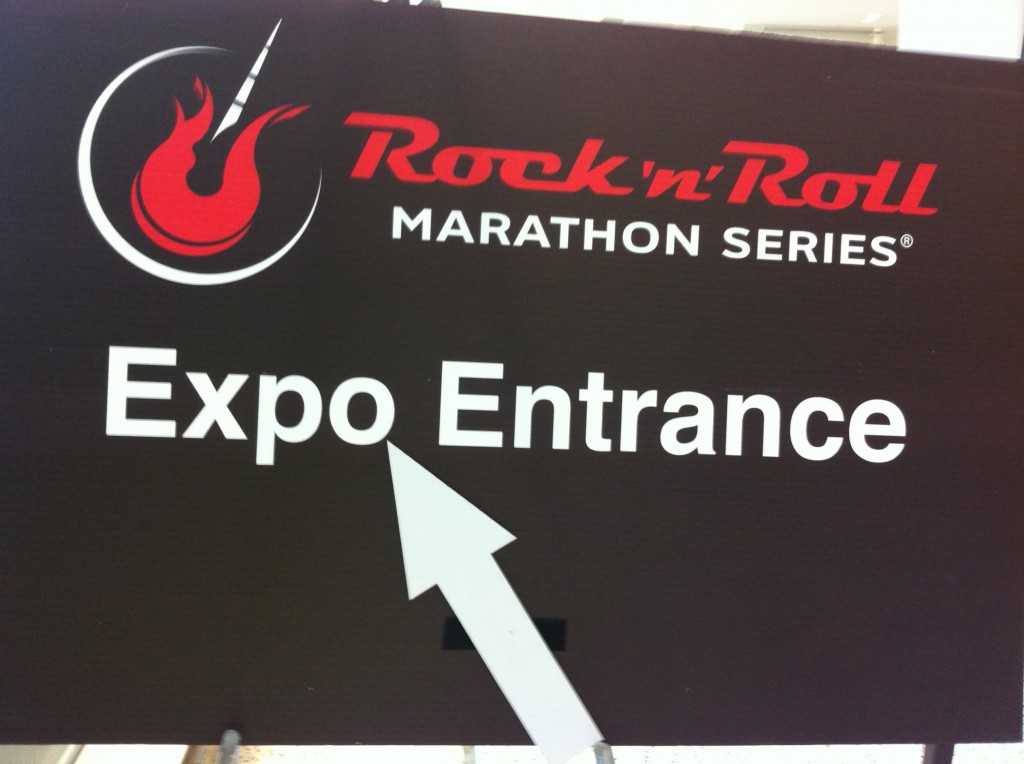 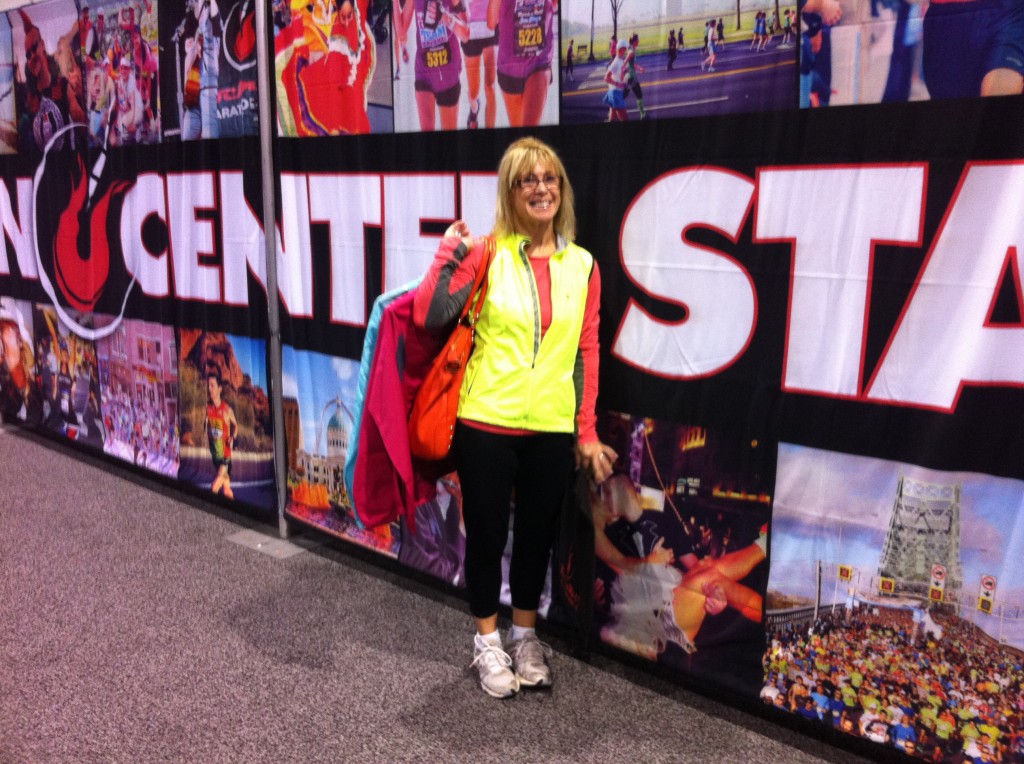 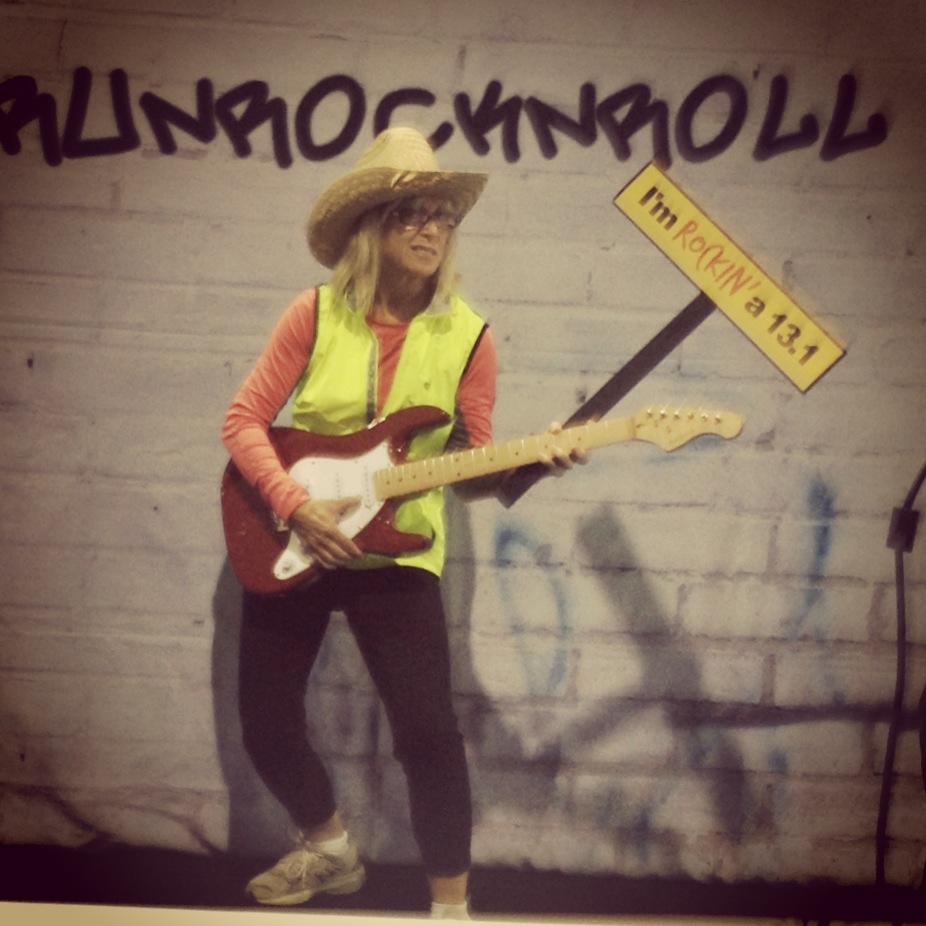 Minus the Blue Suede Shoes.

But at 5:00 am the very next morning, it was all Elvis-like…

Well, it’s one for the money,
Two for the show,
Three to get ready,
Now go, cat, go.

I joined my fabulous daughter-in-law Nicole for a photo on that crisp, brisk break ‘o dawn… 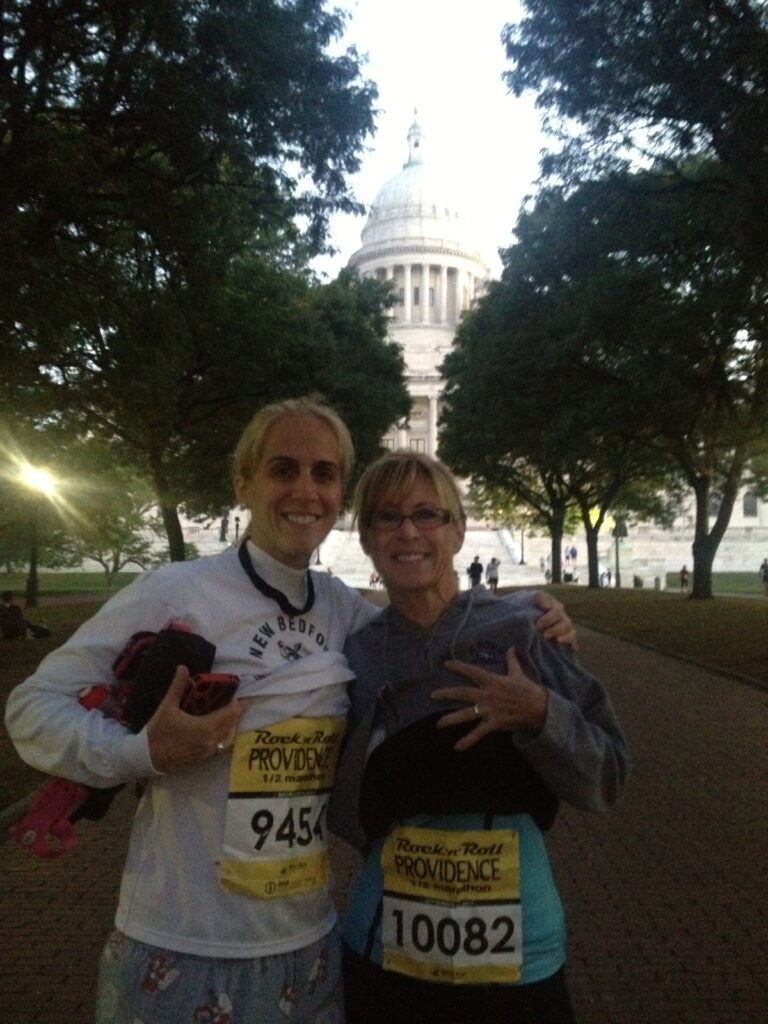 And a quick pic with my ever-supportive biggest fan ever, my husband Barry (who would greet me with bells and smiles and cheers at Mile 1, Mile 2, Mile 8 and Mile 13!)… 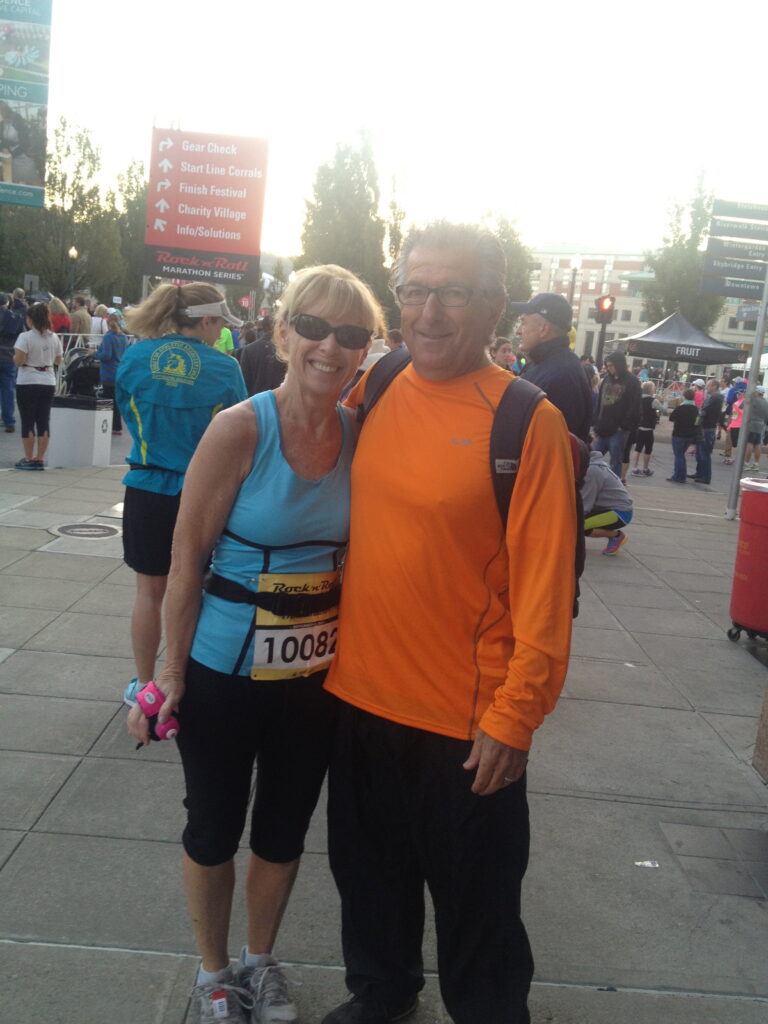 Joined in Corral 10 by our dear friend Tracey, my hero and inspiration who is back running after her long, courageous, winning fight against breast cancer… 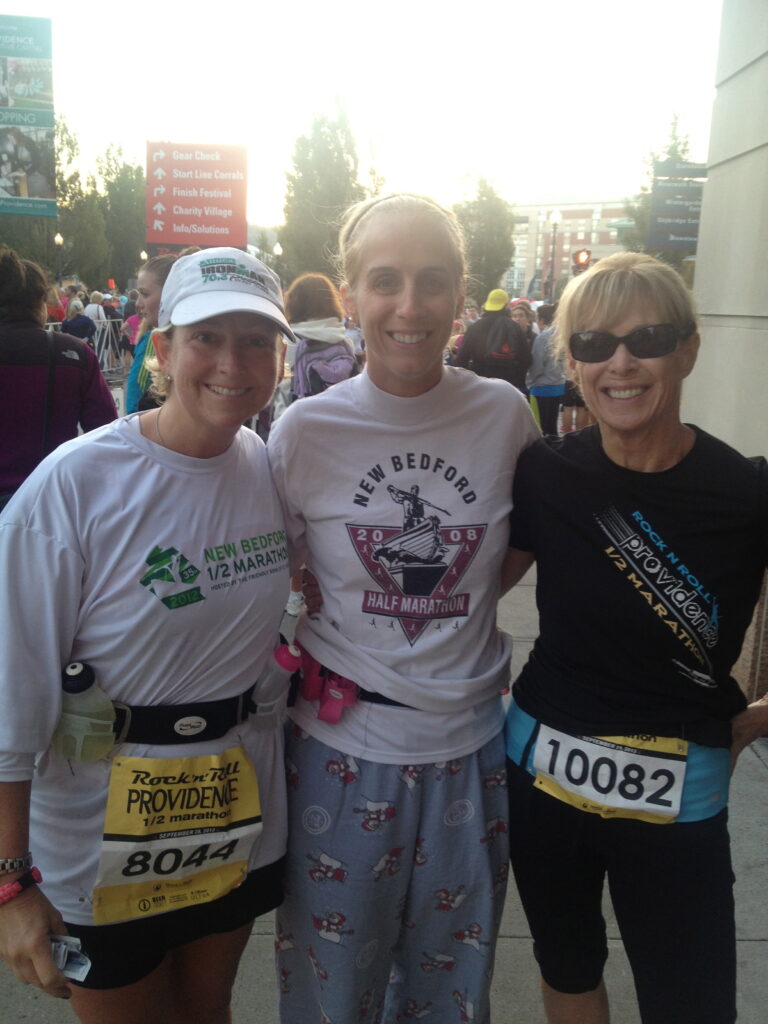 The City of Providence was electric with sights, sounds, music, runners, spectators and the Rising Sun… 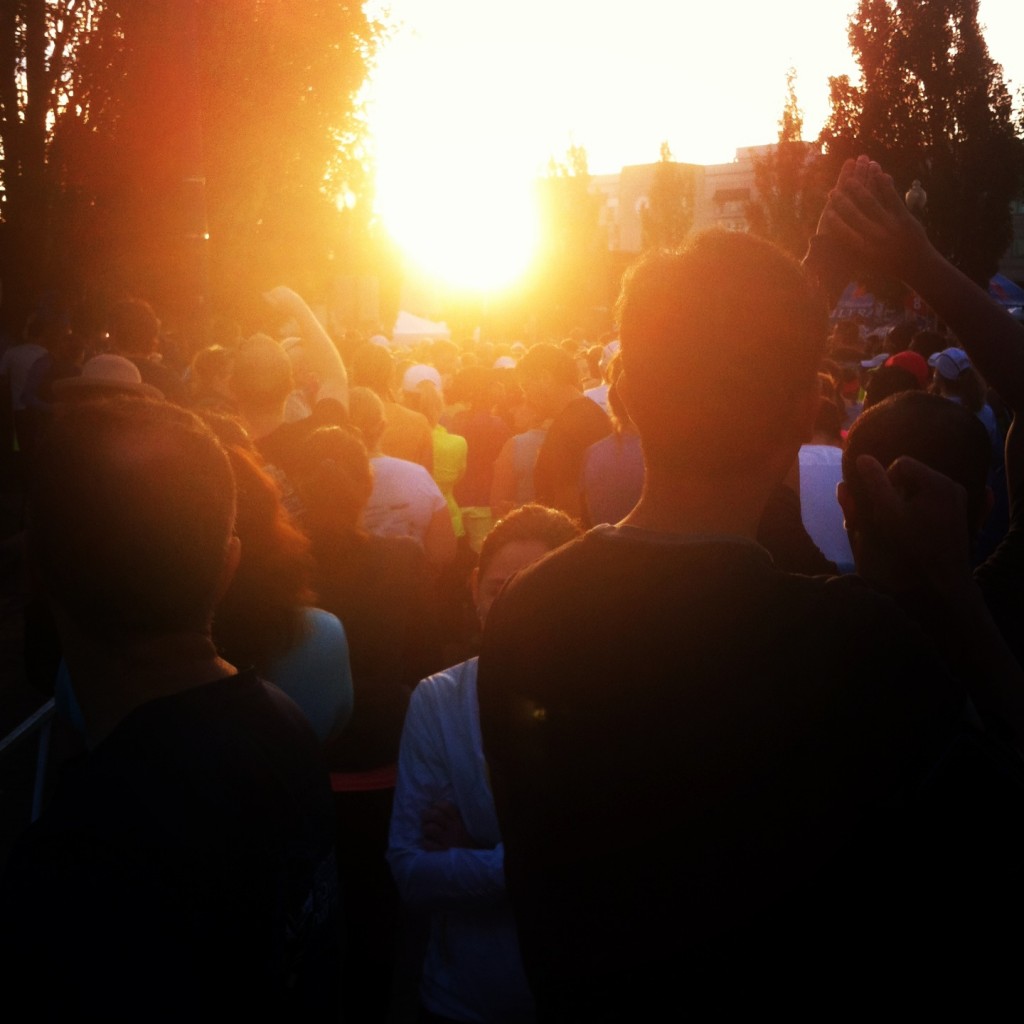 Well, I got one foot on the platform…

Of accomplishing a dream.

I didn’t take any electronics along on my race.  I wanted to hear the bands, the music. I wanted to feel the excitement.  I wanted my feet to fly as they will.  I wanted to soak in my thoughts and listen to the runners around me.

I didn’t want to be encumbered by tracking my miles, my splits, my pace.  I had already done all that while training.

I tell people all the time 60 is the new 12. I wanted to hear my breath and my footfalls. My life. I wanted to feel my heart beating. I wanted that 13.1 miles to be me at 12… that 12 year old girl who ran and played. For fun. Joy. Exquisite freedom. Movement. Blood-pumping excitement.

This is how I ran my Rock ‘n Roll Half Marathon. Up those hills. Down those hills. Along Canal Street and up at Brown and RISD and along Benefit, then North Main Street and up that Hilltop mountain to cheering crowds and bells ringing and little kids root, root, rooting for parents and friends and complete strangers. Now, that’s the Magic of a race…

OK. Maybe here the Magic is in an older gal’s soul. But anyway.

I ran along the lovely Blackstone Boulevard, then adjacent to “the river” on River Drive and onto Gano Street where Barry and I made our first home in a 4th-floor walk-up as newlyweds. I headed back along the harbor and could see downtown Providence gleaming in the morning sun. It was spectacular!

I ran over Point Street Bridge and heard someone who was running in the opposite direction yell, “A mile and a half from here.” I knew I had a couple of miles before that point, but I knew I was getting close and my legs felt strong. I knew I was closing in and I knew at that point that I would be running the entire race. 13.1 miles of running…

I ran and ran and then caught a glimpse of our magnificent Rhode Island State House. I rounded the corner and heard my husband yell, “Here she is! Grandma’s coming!”

I saw my 12-year old granddaughter Maddie come running to the street’s edge with her bell and wide smile and cheering, “GO GRANDMA!” I heard Barry cheering and calling to my family who was waiting on the last hill, that last hill straight up to the State House. “SHE’S COMING. HERE COMES GRANDMA!”

I saw so many people I love. I saw all these hands reaching up and out and screaming, “GO GRANDMA!” 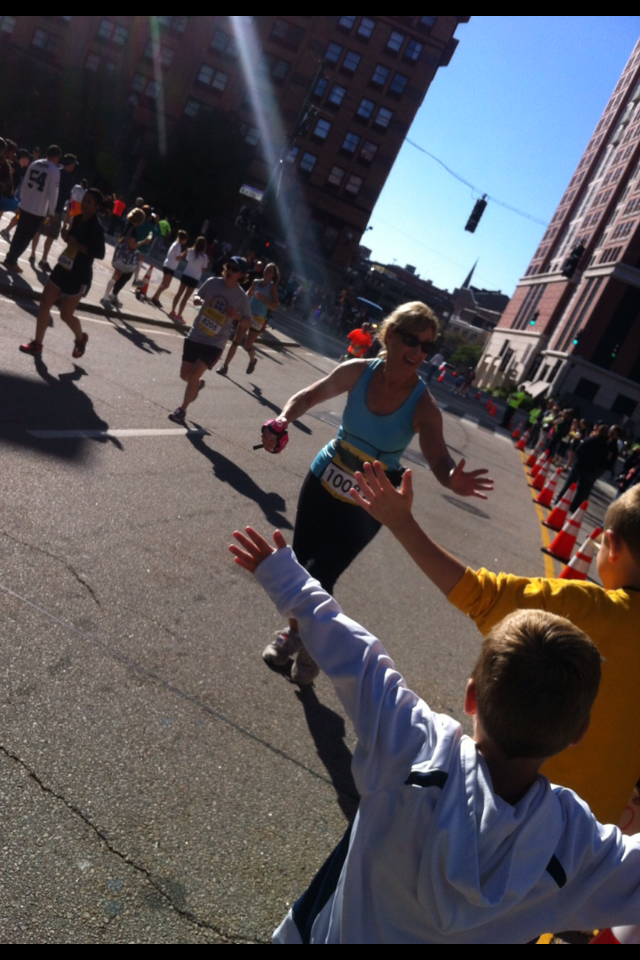 There was not one person who was going to beat me up that last hill.

And then I was done.  Like Tom Petty, I didn’t back down! 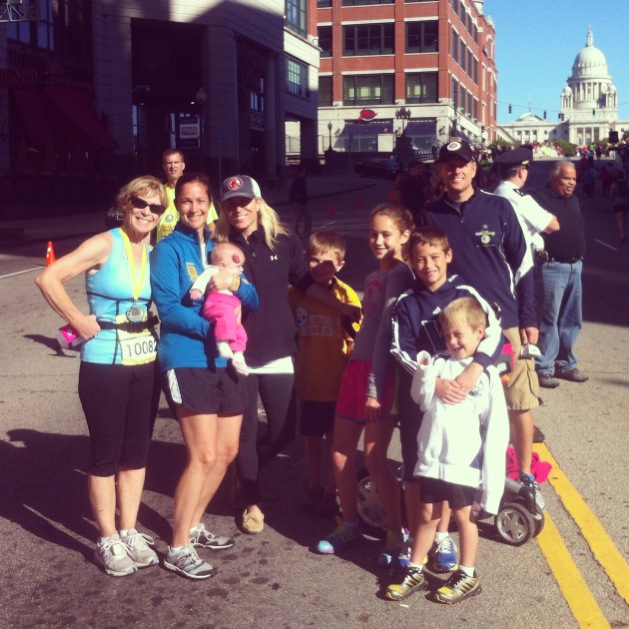 Of course, my grandkids wanted to see my medal… 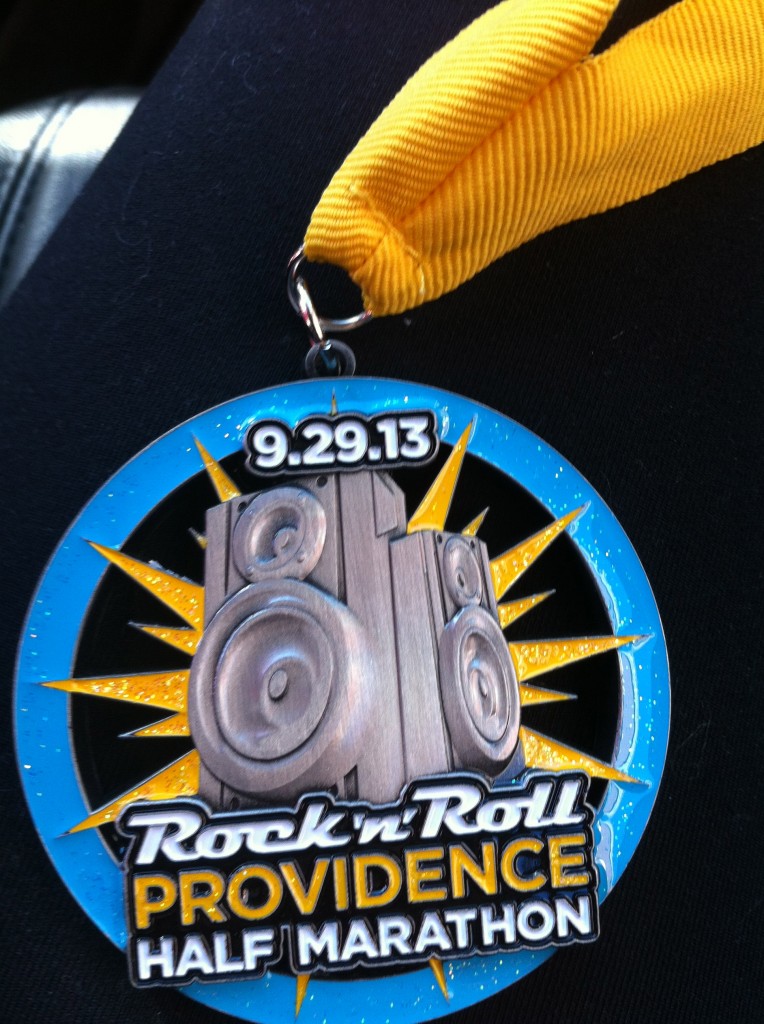 And I could cross Rock ‘n Roll Half Marathon off my Bucket List!

So, how did I do without any electronics and/or tracking devices and my iPod rhythms to make me secure in my running/pace? I must say that I was curious about this, because you know how we get all caught up in all the technologies of running…

I’m sticking with this philosophy in running, and just about everything else in life, too.

I will be back in some city or another to do another Rock ‘n Roll Half Marathon. It was a well-organized race with plenty of emails to update registrants with details. The Expo was outstanding. The morning of the race was incredibly well organized and easy to access. The route was beautifully marked, there were awesomely manned water stops, the music was great, the route was perfectly challenging and the race gear is fabulous…

(Oh, there were also plenty of porta-potties, although one guy jumped ahead of me in line at Mile 6. Who does that, anyway!?)

See you in another city, Rock ‘n Roll!