When I began running almost 5 years ago at age 56, all I knew about running is that my adult kids and in-law kids did it and I loved watching them do it.  My husband Barry and I would get to as many of their races (5ks, 10ks, 10-milers, half marathons, half ironman and marathons) as we could to watch them complete.

Then one day, one moment actually (at the 2009 CVS 5k in downtown Providence. I remember it like it happened today), I decided that I wanted to do this thing, too.  I made a promise to myself at that moment that I would be there next year at the 2010 CVS 5k, running with my kids. That was my one running goal.

That night, I put on a pair of my daughter Jane’s old running shoes and ran. Around my short block. I felt like I was 12 years old… hair tussled, wind-in-my-face, panting, loud footsteps, autumn evening FREE.

I kept running, each time going a little further. A little further. I would then get in my car to figure out my 1/4 miles. My 1/2 miles. Then miles.  I bought myself a pair of running shoes.  Each time I went out to run, I felt that same 12-year old freedom, like running down the street to meet up with friends… or running to the little milk store to buy Ring Dings.  Running around the bases in a pick-up game of baseball at the old Centennial Hall lot.

At 12, I just did things. Play baseball.  Or hockey. Or Pogo-Sticking in my driveway or roller-skating. No special clothing or equipment… just what we grabbed and played with.  That’s what running at age 56 felt like.

I kept my eye and heart on my goal of that 2010 CVS 5k, but decided to train (Hal Higdon) for a 2010 winter 5k to see if I could actually run that far. I could and I did! No electronics. No nothing. Just my feet and my heart.

Then, one year and a few 5ks later, I was standing at the START of the 2010 CVS 5k. My heart was pounding and my knees were trembling.  Then I remembered that 12-year old girl inside who would be doing this just for fun. Freedom. ‘Cuz I could!  It was the best feeling in the world to cross that FINISH line to the cheering of my grandkids.  I never wanted that feeling to end.

If anyone had ever told me on that day that I would go on to run multiple 5ks, 5-milers, 10ks, 10-milers, sprint triathlons, half marathons, a half ironman and two marathons… well, I would not have believed it. I’ve been geared up with all the electronics and running-gear along the way, but recently I stopped taking anything along on my runs but Endomondo for my distance.  I know dozens of routes and their particular miles, but I now like to run randomly, letting my feet go where they want.  Like I’m on an adventure, as well as a run.

I splash in puddles. I run up hills that seem impossible.  I run in pouring rain.  I run into the wind. I don’t care how fast or slow my feet are taking me anymore. I run for FREEDOM. I run like I ran the first night back in 2009, back when I knew I was 12 years old again. I love that feeling.

Take today, for example. While on a 4-mile training run for Providence Rock ‘n Roll Half Marathon, I came upon children’s hand-drawn chalk drawings in the park… 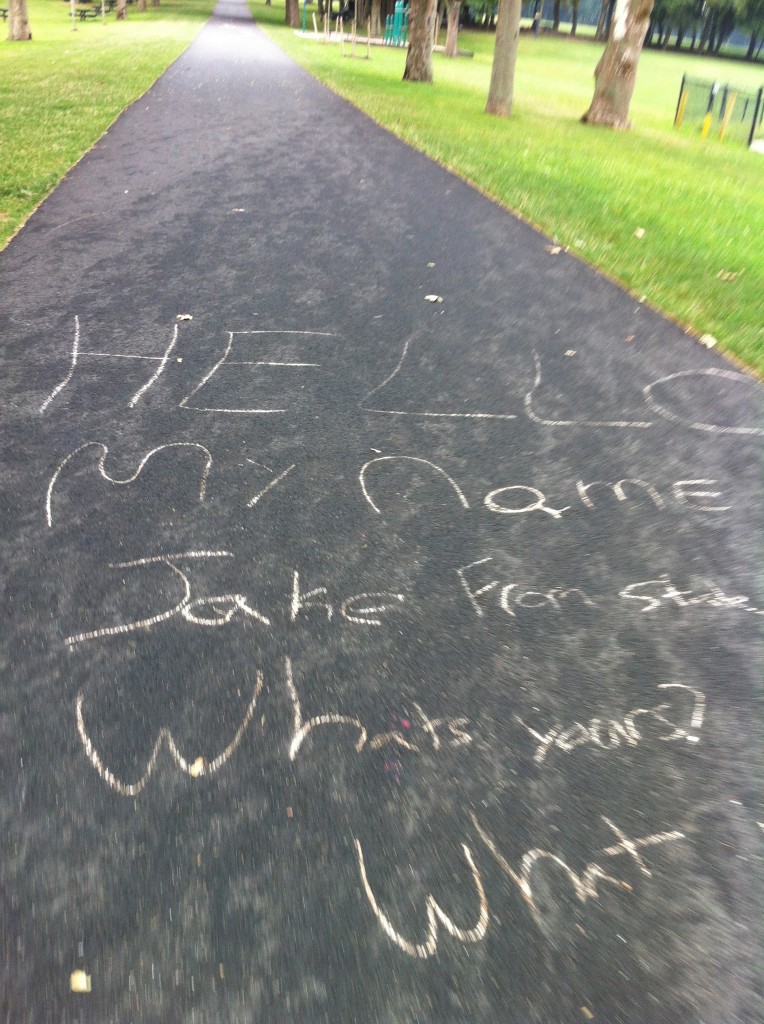 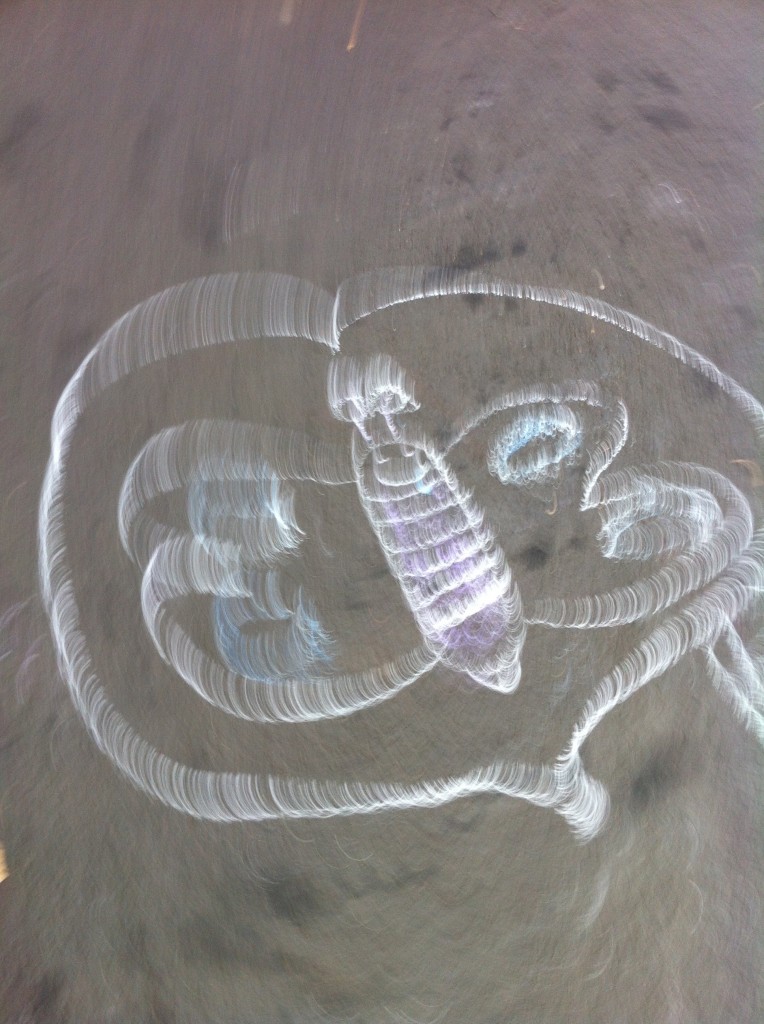 A path for some great journey! 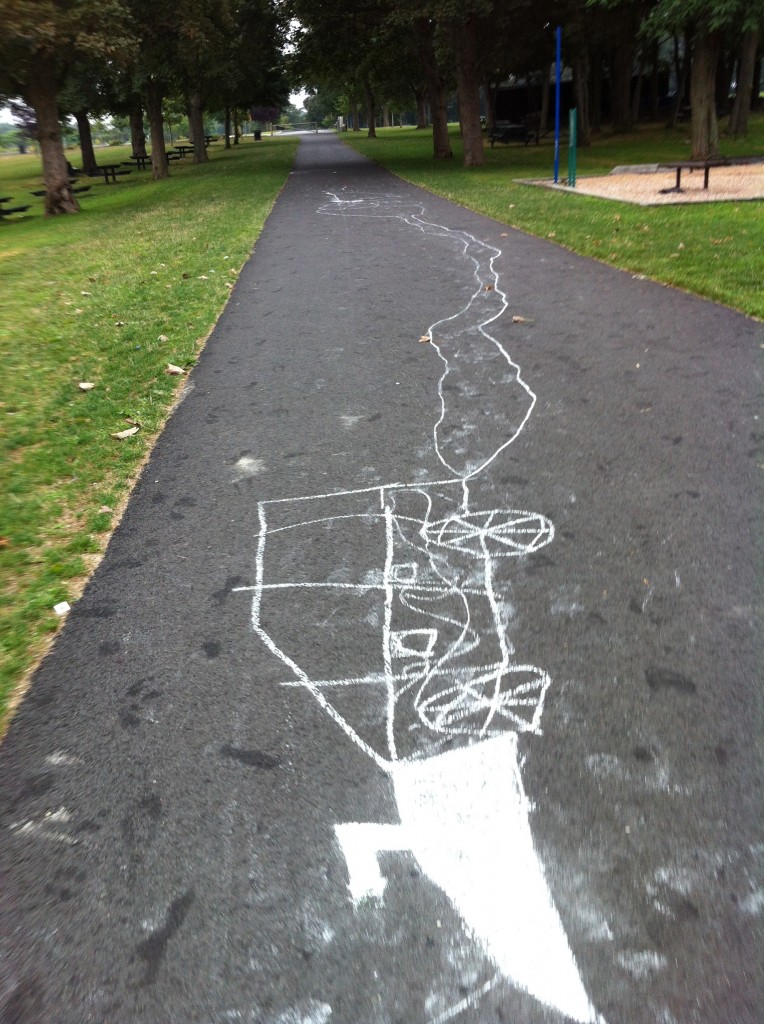 Of course, I obliged! 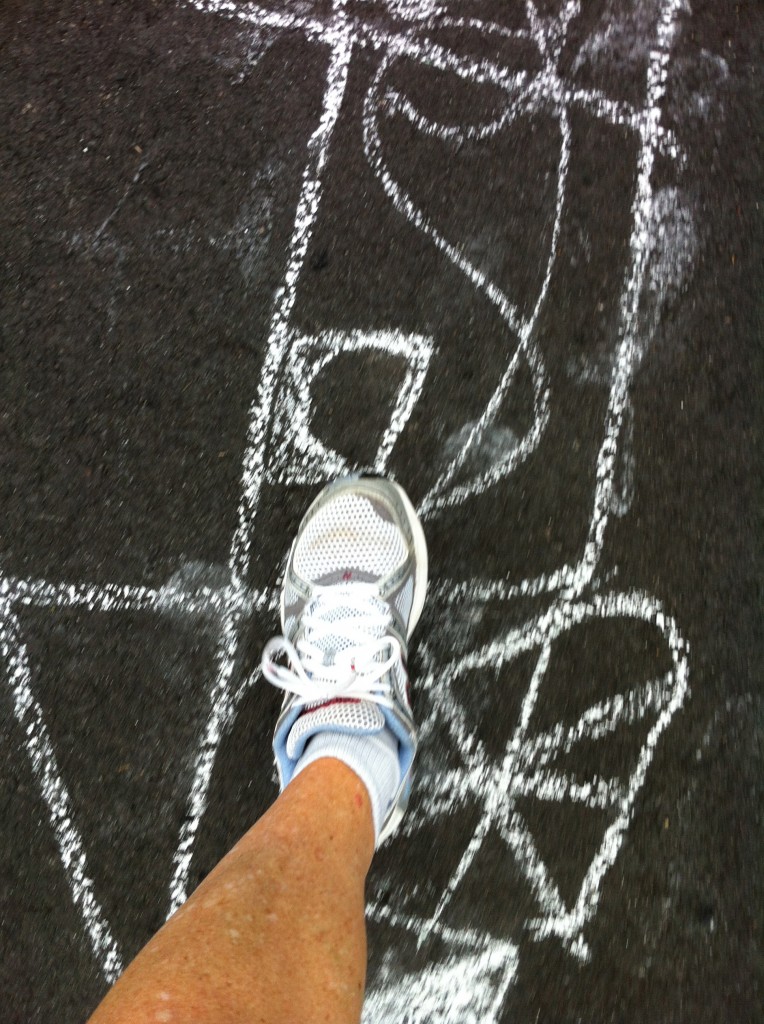 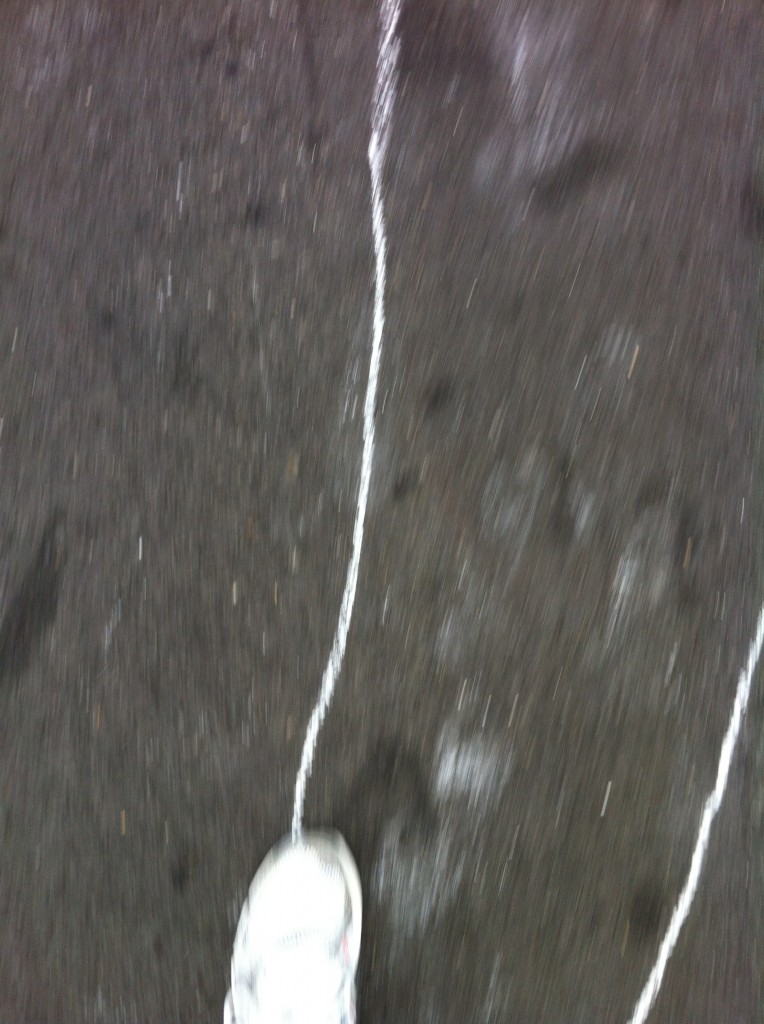 And then Hop-Scotched right along on my run! 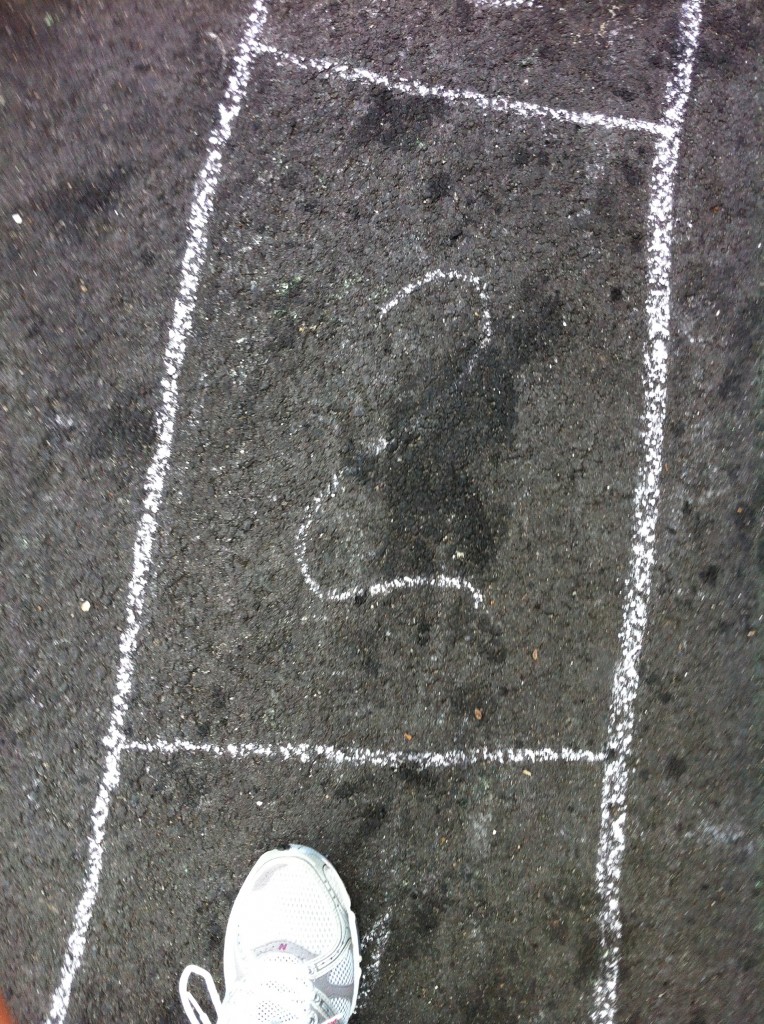 And the next thing I’m gonna do is stop to pick wildflowers along the path for my Mom. Like I did as a kid… 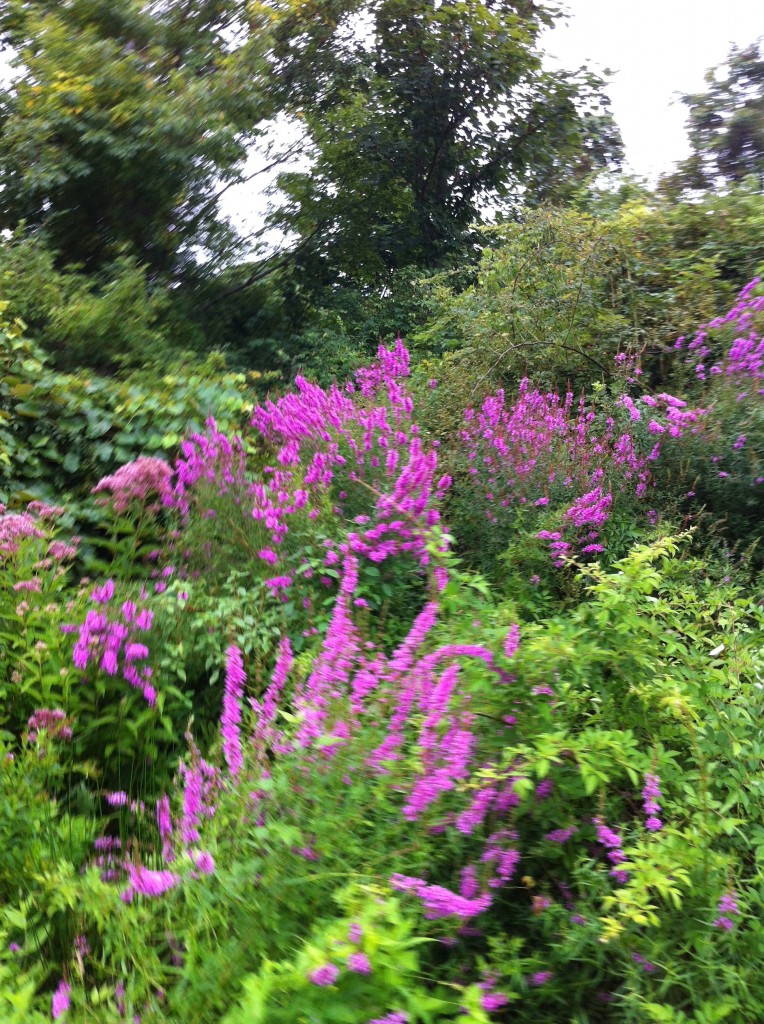