As a young Mom, I realized rather early-on that kids spill things, kids spill things on their siblings, kids get dirty, kids vomit, kids have bathroom accidents, kids bleed, kids get chilly in stores/restaurants/movie theaters/outdoors, kids love to stomp in rain and puddles and mud – and the list goes on.

SO, I’ve been keeping a big ole bag o’ clothing in my car for… well, as long as I can remember. I’ve stashed all kinds of things in the big bags I’ve kept; and I’ve washed, replaced, stuffed, un-stuffed, re-stuffed over the years for my sanity.  This stuff has no rhyme nor reason; it’s just unisex, dry and clean and big enough and small enough to fit someone (including Barry and me!).

I don’t know if you know this, but kids complain when they are wet, cold or dirty; or, at least, mine did.  SO, into my bag, I stuffed extra socks, t-shirts, sweatshirts, underwear and pants.  Old stuff, mostly; but clean, dry stuff.  If I had a nickle for every time I dragged some article of clothing out of my magic bag… well, you know the rest.  I’d be one rich old lady.

SO, now that my 4 kids are all grown up and out of my car, why do I still stuff and re-stuff a big ole bag o’ clothing?

9, soon-to-be 10, grandkids, that’s why! It’s a funny thing, but grandkids spill things, spill things on their siblings, get dirty, vomit, have bathroom accidents, bleed, get chilly in stores/restaurants/movie theaters/outdoors, kids love to stomp in rain and puddles and mud – and the list still goes on.  SO, I keep my new bag stashed… I’ll admit it, for my grandkids’ comfort .

Take last Friday, for example.  4-year old Henry had his Family Fun Day at his pre-school, all decked out in his original t-shirt masterpiece… 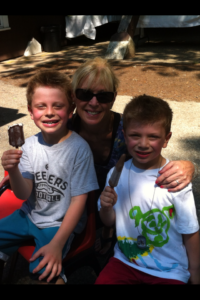 … but it became SO hot that day, that in addition to the scheduled activities, the YMCA opened its spray park for the kids, parents and guests…

Everyone had a blast, a water wonder-world blast!

But here’s the problem.  When it was time to leave, Henry’s spontaneous water wonder-world fun had left his shorts and underwear soaking wet; as in so soaking wet that no towel or 95 degree air or brilliant sun could possibly dry them in time for our every Friday standing-lunch-date at our local Newport Creamery; and going home to change was even more impossible.

But that’s OK, because Grandma has a big ole bag ‘o stuff in the very back of my car.

Henry was skeptical, even though he’s many times been the recipient of a nice warm long-sleeved t-shirt or sweatshirt or a pair of clean pants or socks.  Henry was worried about me having SHORTS on this ga-zillion degree day…

Hmmmmmm. We headed to my car, opened my Santa-like stuffed bag and I began to pull stuff out.

Inventory. Inventory. Hmmmmmm. There were long-sleeved t’s, sweatshirts and fleece pants (yes, it’s been a frigid spring here in Rhode Island). Ah, a couple of pairs of socks. And wait! A black Batman short-sleeved t-shirt.

By now, Henry’s eyes were glued on every article of clothing popping from the bag. “Are there shorts in there, Grandma?”

“I’m looking, Honey,” I answered.  “I sure hope so!”  But there were so many winter things in that bag.

And then… something cotton peeked out. Green plaid cotton. I pulled out the prize.

“Grandma, those aren’t shorts.  Those are boxers,” he said.

I would not be dissuaded.  “The Batman t-shirt is nice and long, so it will cover most of the boxers… that look like shorts!” I said. But… convincingly?

Henry squinted his eyes.  Thought a moment. “I have to check with my brothers,” he said.

“But, Honey, your brothers are all at school. And don’t you want to go to Newport Creamery?” I asked while simultaneously thinking about those 3 older brother Fashion Advisers.

Henry was not convinced.  “Is there anything else in there, Grandma? Like shorts?”

Ah, ha!  Yes!  There was one lone pair of briefs. Gray ones. The long kind.  And I had an idea.  “How about we put the gray underwear UNDER the boxers so the boxers FEEL like shorts?”

And there we go.

I bagged the day!

And off we went to our standing-Friday-lunch date at Newport Creamery, had a wonderful time and arrived back at Henry’s home no worse for the wear.

But as Henry hopped from my car, he announced, “I’m still gonna ask my brothers if these look like underwear.” 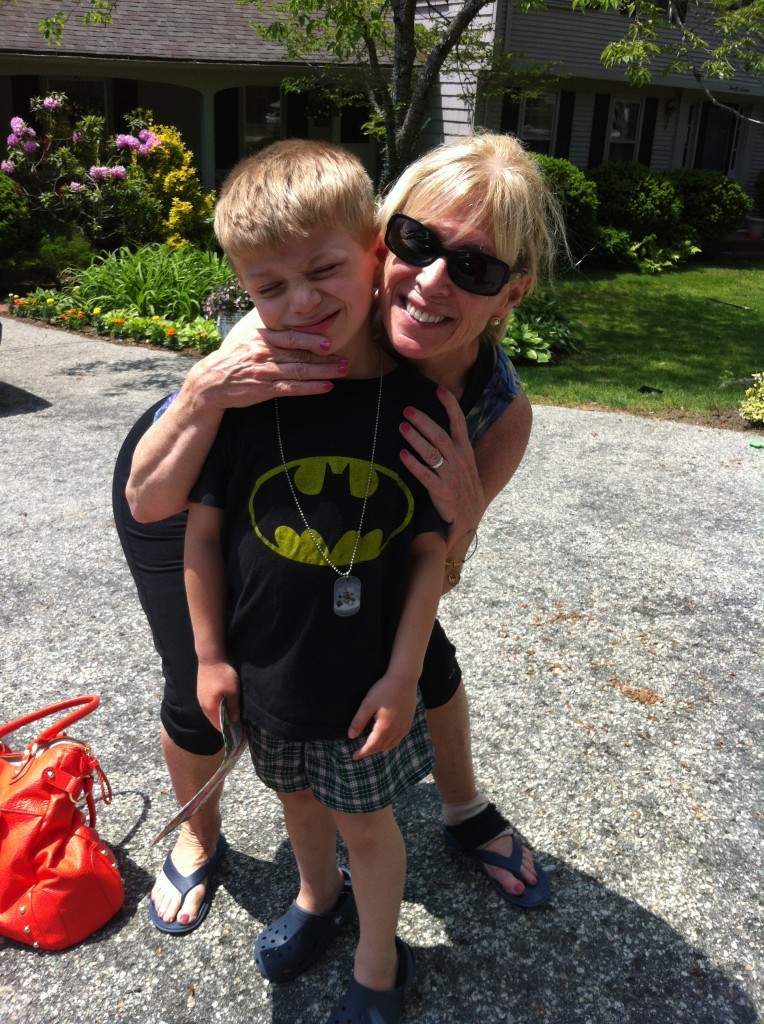 And I’m off to stuff some summer shorts and t-shirts into Grandma’s bag!