30 Days. 30 Bugs. Teaching kids all the YIKES about the Assassin Bug…

During June, I will be offering some pretty interesting bugs to you and your kids… bugs that will excite and entertain kids while teaching them.  Each and every little word or fun piece of information is a building block to love of learning and literacy.

Come along for the YIKES!  It’s gonna be a buggah! 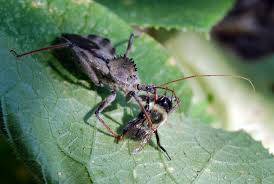 Aggressive, accurate, ambushing and acutely toxic – the Assassin Bug doesn’t mess around.  It gets an A+ in killing.

The Assassin Bug has a license to kill (other insects, that is).  It uses its beak to stab its insect victims with great speed.  Once the victim is stabbed, the Assassin Bug uses its rostrum to inject a deadly liquid toxin/saliva that dissolves the prey’s tissues.  YIKES! The Assassin Bug then quickly sucks the liquified tissue from the prey.   Double YIKES!

AND often attaches the victim’s empty shell to its back, for extra amour, using its sticky liquid secretion. Are there enough YIKES for this insect?

Most species of the Assassin Bug are brown , but some are black or even brightly colored reds and oranges.

The Assassin Bug has an elongated head, long antennae, a narrow neck, long legs and, of course, its deadly beak.  The beak is short and segmented in 3 parts.  The Assassin Bug also has membranous wings, but the wings do not make the bug a good flier.  An adult Assassin Bug can grow as long as 3/4 inch in size.

The Assassin Bug’s killing abilities allows it to go after larger insects than itself.  Farmers are not threatened by the Assassin Bug because it kills garden and crop pests and is actually considered a friend to farmers.

Some species of the Assassin Bug are known as kissing bugs.  (I’ll give you the YIKES! before I tell you why.)  Because they are attracted to the soft tissue of human lips and eyelids and may bite while a human victim is sleeping.  TRIPLE YIKES!

Introduce your kids to the Assassin Bug.  Tell of its deadly secrets.  Assassin Bugs can give quite a sting if not handled properly, so keep note of that, too.  Explain to your kids that there are more than 6,000 species (quadruple YIKES!) of the Assassin Bug, and about 100 live and breed in North America.

Join me here each day in June for 30 days. 30 Bugs. – a little fun, a little learning and a lotta YIKES!

30 Days. 30 Bugs. Teaching kids all the YIKES about the Assassin Bug! was last modified: June 12th, 2013 by Sharon Couto