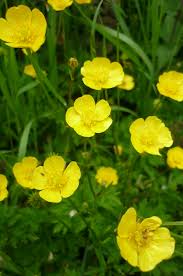 The BUTTERCUP – Its butter-yellow cup-shaped flower beckons kids of all ages as it brightens both meadows and marshes and even ball fields!  The Buttercup blooms in April and May, and in some places throughout the entire summer.

Buttercup is the popular name applied to the species Ranunculus, Latin for little frog… referring to many species found near water, like little frogs.

The Buttercup symbolizes childishness, maybe due to children’s delight in twirling a Buttercup beneath the chin to see if someone likes butter.  This little game has no real origin, and the yellow color that appears is most likely due to the Buttercup’s skin irritant that is both poisonous and turns the skin yellow.  Kids beware of this little game.

And speaking of poisonous, the Buttercup has a bitter taste that makes it inedible to cattle, horses and most animals.  This is nature’s way of keeping animals away from fresh blooms of Buttercups.

The Buttercup has the nickname Coyote’s Eyes in some part of the United States.  As legend tells us, once there was a coyote who was playing a game of tossing his eyes high into the air and then catching them.  A passing eagle snatched the eyes on one of the tosses, and the coyote made new eyes from the Buttercup.

At one time it was thought that the color of butter was due to cows eating Buttercups!

The discovery of wild Buttercups peeking up through fences and along roadsides and even in ball fields is truly a childhood delight.  Let your children in on the secrets of the Buttercup… even the ageless discovery of the game do you like butter? Be careful about getting too much Buttercup color on your kids’ skin… but tell of all the stories of its name origin and its legends.

Have fun with the summery Buttercup, just as you did when you were a kid!