The news of yesterday’s bombing at the Finish of the Boston Marathon sent chills up my spine as tears fell from my eyes.  People were emailing me and Facebook friends were messaging and my children were getting phone calls and emails and text messages to see if anyone in our family was running Boston or there in Boston at the race or Red Sox game or celebrating Patriots Day in Boston.  I thank with all my heart those who care for and love my family.  Thank God none of us were running yesterday or there in Boston, but we did have friends there and running club friends running the marathon.  It took hours to check on everyone’s safety as we simultaneously listened to newscasts and watched the horror that had unfolded on Boylston Street.  The shock of knowing this place so intimately, to have stood in those deep, deep bunches of spectators, to know runners, family members, who have run this iconic race with such joy in the great challenge… it is impossible to take it in.  My heart cannot fathom this act, this tragedy.

Last night, I got a Facebook response about the marathon from a friend in Indiana, a friend whom I have not met in person… a friend with whom I share a Boston Marathon Story of another kind. A happy story of dreams of running Boston, a half million people, a friend in Indiana and finding a complete stranger “dressed in blue” on Boylston Street. My friend Erin wrote: I was thinking back to Boston Marathon years ago when you snapped a picture of my friend at the finish line. Do you remember that? What a different feeling I had that day than I had today. So much loss for words over everything today.  I did remember that.  I thought about that all yesterday afternoon and evening.  I thought about that joy, that 2010 Boston Marathon that two of my own children and my future son-in-law ran… and that guy in blue from Indiana.  I thought hard about the beloved Boston Marathon and my love of the City of Boston, where my Mom was born and grew up and family still lives, and tried hard to remember the joy.  It may take time to really remember in the face of yesterday’s tragedy as we remember and honor the deceased and injured, but we must honor these runners, these spectators, these rescue personnel, these people who know the freedoms of our great country and continue to know the freedoms, even in the face of the sometimes hidden faces of evil.  26.2 miles from Hopkinton to Boston has come to mean so much more to me, and here is one tiny, personal, joyous reason why, written April 20, 2010…

Boston Marathon 2010… the joy I remember, as a spectator.

A journey to the Boston Marathon begins in every corner of the world. It has been this way for 114 years. A boy or a girl, a woman or a man, a runner or a romancer… it begins with a dream. And the journey most always begins, too, with someone or some others believing in, supporting and following that dream.

Yesterday, 27,000+ runners stood in the cool morning breeze in the little New England town of Hopkinton, Massachusetts to begin the 26.2 mile journey to accomplish those Boston Marathon dreams. Barry and I were there in Hopkinton to watch our son Keith and our daughter Jane take those first steps toward Boston. Their first Boston Marathons. And Jane’s boyfriend Brian was there, too, running 3rd Boston Marathon. Their individual dreams are theirs to tell… just as the dream of every other runner is his or hers to tell. But as a spectator, I can tell you that the feeling of the collective force and power of all of those individual dreams was something magical, something dazzling. 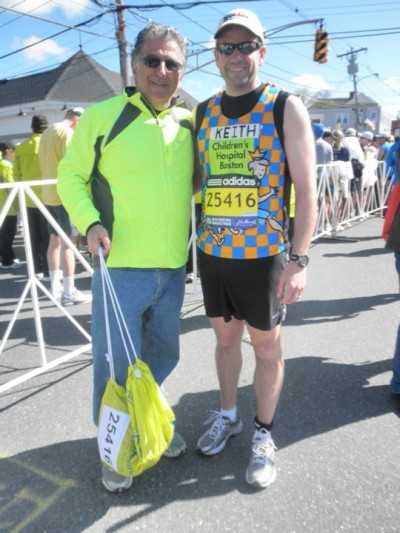 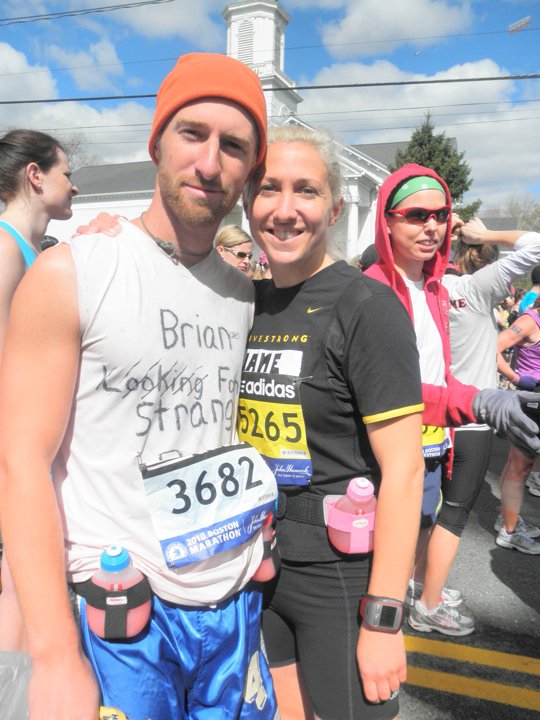 Barry and I live in nearby Rhode Island, so although our trip to Hopkinton began very early in order to actually get into Hopkinton, we felt very fortunate to be there. But this is a new world, and other people, all over the world, were using technology to watch the race and/or follow their runners… people feeling the feeling of being there. I began my morning journey with a Facebook update that said Barry and I were on our way to Hopkinton…

At 8:01 am, Erin Facebooked “good luck” to a fellow teacher, Erik, who was running Boston. I Facebooked back to Erin, asking if she happened to know Erik’s race number, at the same time watching the tens of thousands of runners heading into the little Marathon Village at the high school in Hopkinton. It was a veritable sea of runners, runners wearing every color, every design… runners of every height, size, shape and age imaginable. At that time of the morning, most of the numbers were not attached yet or were hidden under warm clothing. It took Barry and I an hour just to find Jane and Brian… and we wouldn’t find Keith until the race was about to begin. Spotting Erik was that needle in a haystack thing.

Barry and I were able to maneuver ourselves through the crowed, electric-with-excitement streets of Hopkinton to the starting corral in time to see Jane and Brian and Keith begin their journeys on the historic Boston Marathon course. We watched our children stepping toward fulfilling personal dreams… and we hugged and waved and told them we’d meet them in Boston. It was exciting beyond even words to be there. 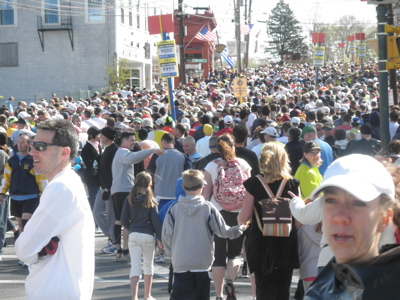 I Facebooked that Barry and I were on our way to Boston. At 12:26, just as we were pulling into a parking spot downtown, Erin Facebooked that Erik had just crossed the 13k mark. Erik was being followed on-line by the teachers back in Indiana. Barry did some quick computations in his head (he’s mathematical like that) and was very excited about how well this guy from Indiana that we didn’t know from a friend in Indiana whom we’ve never met was doing in the race. Can you follow that?! I Facebooked Erin that we were parking and heading to the FINISH and maybe I could get a photo of Erik.

Barry and I know Boston rather well. My Mom grew up in Boston, my Nana lived there all her life and I’ve spend countless hours there. Barry did his undergraduate work at Wentworth Institute of Technology in Boston and I did my graduate studies at Boston University. We know the streets, the shortcuts, the lay-of-the-land. But yesterday, everything had changed. Streets were blocked or reserved for VIP’s. Spectators were 15 – 20 people deep in most areas. Even the marathon official staff members were at a loss at which ways to direct people. Keith’s wife Nicole and their two children, Adam and his two children, and several friends were literally “buried” in people at the FINISH. A couple of quick phone calls made us realize that we’d never get in that far.

We walked. And walked. We maneuvered. We squished. We stopped. We were not happy with the view. We walked some more. Finally, we stopped at a spot right on Boylston Street, about a half mile from the FINISH. 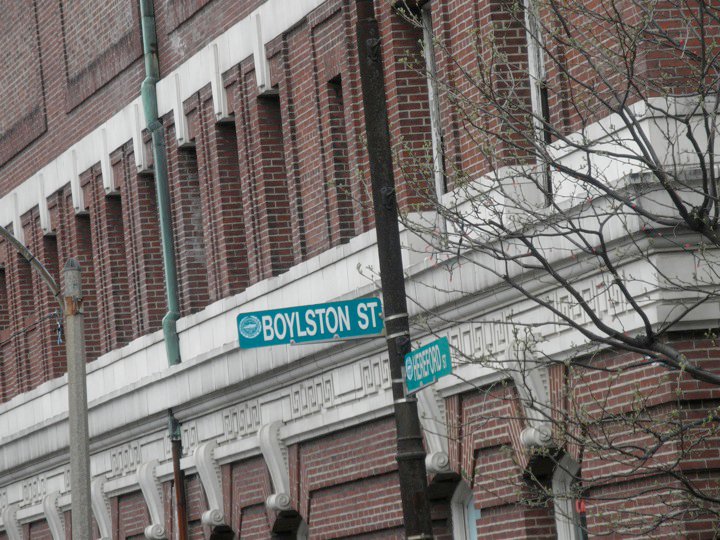 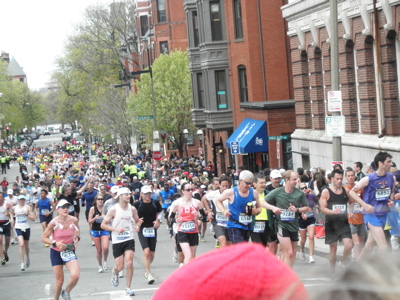 The crowd was still 15-or-so deep (and I’m very short), so I stood on top of a little bush (don’t tell the Boston maintenance people, please) and Barry and I saw the 2 and 3-digit finishers making their runs up toward Boylston Street. Within seconds, I saw a couple of 4-digit numbers… and straining my eyes, I thought I glimpsed 1059. I whipped out my camera and while balancing on that poor little bush, I zoomed in and took the shot. I looked back immediately at the photo, only to realize that the runner was SO SWIFT of feet that I got but a racing blur of blue… 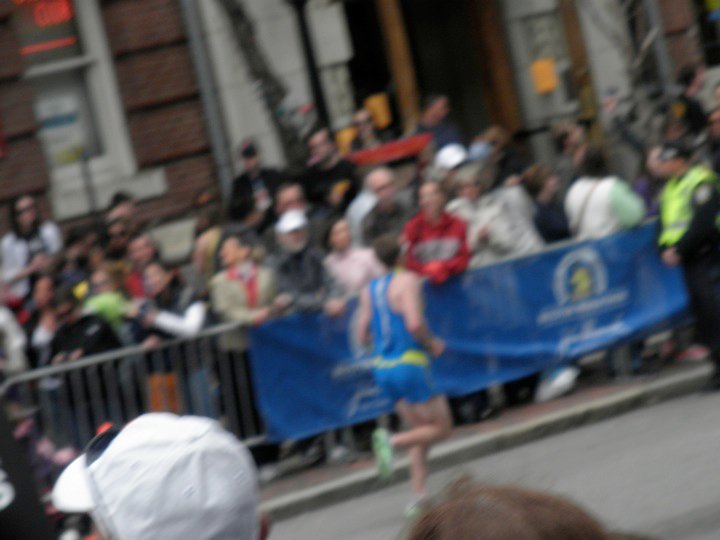 I Facebooked Erin and asked if Erik was wearing blue. Then I Facebooked again and asked Erin, “How could you possible know unless he wears some lucky clothing that’s his trademark!?”

Erin Facebooked back, “He might be! He usually wears his college stuff, which is blue. He finished, 158th!”

Barry and I stood at that same spot until Jane, Brian and Keith ran up toward Boylston Street on that last part of their magnificent journeys to run the Boston Marathon. Journeys that began as dreams… and dreams that became realities.

So… did one runner from Indiana of 27,000 or so runners who teaches with a “friend” I’ve never met converge at Boylston Street in Boston with one of a half million or so spectators along a 26.2 mile race?

A moment of a journey shared by two complete strangers on a street in Boston… and that someone who believed in following the dream from Indiana.

Boston Marathon 2010 – I remember Jane, Keith and Brian running AND a total stranger from Indiana. This is the dream of Boston Marathon. was last modified: July 9th, 2015 by Sharon Couto
SHOWHIDE Comments (6)

Boston Marathon 2010 – I remember Jane, Keith and Brian running AND a total stranger from Indiana. This is the dream of Boston Marathon. was last modified: July 9th, 2015 by Sharon Couto