In October 1975, I began my teaching of high school English in my own classroom, with my own students.  It was a dream-come-true for me.  I had graduated from college with a degree in Education in June 1974, volunteered in this particular school by day (as a tutor) while cocktail waitressing at night, and done some substitute teaching in the same school.

My first day of teaching just happened to be my birthday.  It was the most special birthday gift ever.

I created bulletin boards, arranged the desks and bookcases just so, supplied my desk with every “teacher” thing possible… and set about my dream.  I felt prepared.  I felt ready.  I called upon my college classes and preparation, my student teaching, tutoring and substitute teaching experiences to motivate my students, engage my students, monitor any behavior situations as they arose and help my students reach the stars.

But what I could never have been prepared for, what no college classes, student teaching, tutoring or substitute teaching prepared me for, was a handgun in my classroom during my second week of teaching.  It all happened so quickly, but it’s an image and incident that I will never, ever, ever forget.

I was writing on the blackboard.  I heard some unusual-sounding whispering behind me… and then the unusual silence of high school kids. I turned around to see a student in one of the first rows.  He looked at me quickly.  He looked down at his desk.  His jacket was spread across it.  I saw the hand and arm of another student, in an adjacent row, quickly pull back from whatever was under that jacket.

I honestly don’t remember thinking.  I just remember walking to that desk, silence enveloping that classroom and the world.  I pulled back the jacket.  There was a handgun on the desk.

The student at the desk began a litany of reasons why he had that gun.  I don’t remember one reason.

I reached to cradle the gun in my hands.  I knew I had to get that gun.  Quickly.

The student with the gun and the excuses continued with his fast-talking runaway train of why he had the gun and why I could not take it.

I picked up the gun.  I walked backwards, away from his desk.  I told another student to immediately go to the principal’s office and get him here.

The student with the gun became irate.  Angry.  Telling me I had no right to take the gun.  The principal was there in moments.

The principal took the gun from my hands.  He took the student from my class. The gun had taken the breath from my lungs and the beat from my heart.  I resumed my lesson.

I resumed my lesson.  I didn’t know what else to do.  The rest of the class sat in stilled silence.

The gun was registered.  The gun was stolen.  The student would be expelled from school.  He would never return. 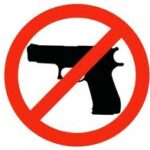 A handgun in my classroom… was last modified: December 17th, 2012 by Sharon Couto
SHOWHIDE Comments (9)

A handgun in my classroom… was last modified: December 17th, 2012 by Sharon Couto