I’ve had some pretty cool *Mile-8 experiences while training for Marine Corps Marathon, but wouldn’t you know that the best was saved for last.

I train alone.  I don’t ever want to feel that I’m holding someone up on a training run; so when I pressed that key to register for Marine Corps Marathon way back in March, with Runner’s World Challenge, I knew I had some serious miles to pound out.

But I also knew, and greatly looked forward to, that the race weekend would be filled with family and friends.  Our son Keith, daughter-in-law Nicole and friends Jill, Joe, Tracey and Bill were training and running, too.  These 6 people are strong runners with many, many marathons under their collective belts and they love training together, especially the L-O-N-G weekend runs.

I changed my l-o-n-g runs to Mondays at the get-go, but still exchanged long-run stories with the others.  Everyone was on-board, on-plan, on-course.

Life, though, has a way of sometimes changing everything.

I will never forget the moment.  Keith had brought our grandson Andrew to our home one hot summer evening toward the end of July to hang out with Barry and me and Audrey’s 4 boys.  We grabbed a whole bunch of deck shoes and headed to our local park, where the boys could play at our town beach.  It was a magnificent evening of collecting shells, wading in way too deep, climbing on slippery rocks, sunset and even the boys outdoor showering at the park in total darkness with all their clothes on!

It was a night that could never foretell something bad. I had casually asked Keith what Nicole and Taylor were up to… and he answered that Taylor was with a friend and Nicole was with Tracey; then the words, “Tracey found a lump on her breast.”

My heart stopped.  The universe stopped.

The next few days/weeks brought appointments, surgery, treatments and news of many, many more weeks of treatments for Tracey; and, of course, her Marine Corps Marathon training was halted.

Tracey made plans to come to DC anyway, to support her husband Bill and her friends. Tracey has taken this insidious disease bald head-on and is kicking its abominable ass.

Last Friday, after multiple discussions of to go or not to go in light of the looming Hurricane Sandy, we all found ourselves at the airport in Rhode Island…

… wearing our T Rex shirts to celebrate Tracey’s nickname and her intrepid ferocity.

People from Providence to DC stopped to ask about the message.

Early on Sunday morning, the day of the race, Barry and Tracey walked with the rest of us to the race entry… 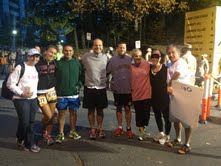 When Tracey explained to a young Marine at the entrance that she was not running… a magically profound moment happened; a moment of care, hope, faith and love that I will always cherish…

Then us runners headed into the enormous shoot.  Tracey and Barry headed out with a map of the City and race course to attempt sightings of us 6 runners, a formidable undertaking, to say the least, never mind for someone whose entire system is fighting, fighting, fighting.

But lo and behold, there Tracey was with Barry, with her larger-than-life spirit and cheers and encouragement at Mile-1…

Nicole and I had decided to run together, which was a joy in itself… and at mile 4 or so, we heard the shouts of ENTHUSIASM again.  There were Tracey and Barry!

The miles kind of came and went for awhile and suddenly there was a pretty hefty hill facing us.  Yikes!  But before we knew it, we had scaled the hill and conquered 8 miles.  8 MILES!  Almost 1/3 of the way!  As we headed down the hill and onto a flat grade, I saw the pink and white T Rex of Tracey and Barry and my heart soared!

It was the most significant, most moving, most memorable, most important, most perfect Mile-8 of all Mile-8s ever.

Tracey.  Yes, Tracey taking this insidious breast cancer disease bald head-on and kicking its abominable ass with a smile for her friends who were running the race she should have been running.

I could have floated the rest of the 26.2 with the joy of Tracey’s presence, her smile, her positive spirit, her verve for life.

Nicole and I would see Barry again at Mile-15, then at Mile 26 (.2 to go!)… and then at the exit shoot.  He would explain to us how he and Tracey had caught 2 cabs to maneuver parts of the race course, but mostly they walked or jogged to see the 6 runners who mean the world to them.  Tracey would meet the fastest runners at the finish and head back to our hotel to get ready for the long drive home to Rhode Island (all flights canceled, courtesy of Sandy, and thank God Nicole had insisted on renting 2 cars just in case).

Yes, when Tracey was diagnosed with breast cancer and knew she could never continue training for Marine Corps Marathon, she did what Tracey does; extend her heart, spirit and arms to support those who had began this journey with her.

And to think that I’ve been writing about Mile-8 and documenting all of its little miracles of life for all these weeks… well, I could never have imagined that Mile-8 of the Marine Corps Marathon would become the most extraordinary lesson of all — the journey is never about the finish, it’s about managing the miles along the way, even when life tosses in a day, a night, a moment or a mile that changes everything.

*My other Mile-8 Long Run Adventures: