Accused of counterfeiting? Yes. Me.

I can just see myself before the judge, him cloaked in the formality of his black robe of justice, me in sweat pants and flip-flops,  gripping my re-usable, organic grocery bags with white knuckles of fear.  Beside me is the super-efficient, super-unrelenting supermarket cashier from Terminal 9.

“What’s in the bag?” the judge demands.

“Sir.  The Reddi-wip is for topping strawberry shortcake.  For my Mom.  Her favorite.  The recipe is on the back of the box, you know.  And the Reddi-wip is for my grandchildren, too.  They love Reddi-wip to make faces on pancakes and top ice-cream, yogurt and pudding… (smile) and they love it when I squirt it in their mouths and…”

“AH, HA,” he interrupts.  “So THAT’S why you counterfeited the  REDDI-WIP COUPON?”

“Do you know, Ms. Couto,” (squints his eyes and screams) “that punishment for counterfeiting supermarket coupons may include any or ALL of the following?  (slams gavel as he whips through the pages of The Book of Heinous Supermarket Crimes)  You face a FINE.  A term of IMPRISONMENT. PROBATION OR PAROLE.  RESTITUTION to the victim; in this case, the supermarket.  And THE DEATH PENALTY.”

(He turns to supermarket cashier, gently coaxing her)  “Can you identify THIS woman as the perpetrator of THIS Reddi-wip coupon counterfeiting crime?  And is THIS (pointing to me) the woman in THIS photo?” 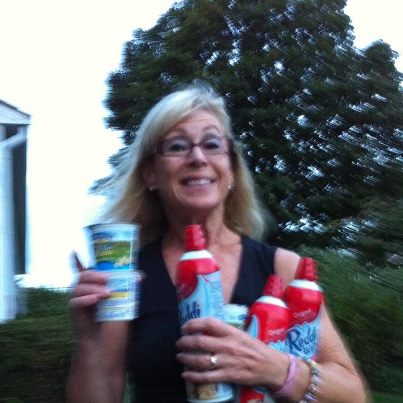 “That’s HER, all right,” the cashier announces.  “The Reddi-wip coupon Counterfeiter.”

Yesterday morning, I took my re-usable shopping bags to my local supermarket to purchase a few things. Along with my shopping bags, as always, I brought my coupon folder.  In my coupon folder are lots of coupons for things I regularly purchase; including my last of several of these… 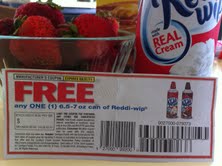 My family LOVES Reddi-wip, so these coupons have been like gold to me.  Breakfast, lunch, dinner, dessert, snacks and everything in-between involves Reddi-wip, especially with frequent visits from my 9 beautiful, hungry-for-Grandma-and-Pop-up’s-treats grandkids.  My refrigerator is always at the Reddi-ready, stocked with Reddi-wip, close and handy on the lowest refrigerator door shelf for ease of reach for hungry kids… 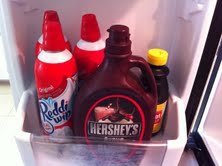 I’ve used these Reddi-wip coupons in multiple supermarkets with nary a glance.

Until yesterday.  With the supermarket cashier at Terminal 9.  (I won’t give the name of the very large New England supermarket chain because I really love this market, and this cashier’s behavior is no reflection on the supermarket itself.  Thank you.)

So back to yesterday.  I shopped, stood in Terminal 9 check-out line, emptied my cart, chatted with the very friendly bagging young man (even though I did not need bagging services), placed my Reddi-wip coupon (the only coupon I used on that particular order) on the conveyor… and waited to check-out.

The cashier picked up my coupon, studied it for some important conspiracy gathering and announced some news to me.  LOUD NEWS.  Like LOUD ENOUGH for everyone in the entire expanse of supermarket to hear, including the guys unloading the trucks on the loading docks in back.

“THIS COUPON IS COUNTERFEIT,” she announced.  (Did I mention LOUDLY?)

It took me a moment to gather a thought.

“What?” I answered.  “What do you mean by ‘counterfeit’?”  (She actually, really, truly used the word “counterfeit”.)

She continued with great pride in her snare.  “YOU COUNTERFEITED THE COUPON.”  Oh, how delighted she was to ANNOUNCE TO EVERYONE IN MY LINE AND EVERYONE IN THE ENTIRE STORE THAT I WAS A SUPERMARKET CRIMINAL.

“That’s ridiculous,” I answered.  “I got this coupon and many more exactly like it from the manufacturer.  I’ve used them in this store and in other stores.  I don’t even know what you mean by ‘counterfeit’.”

But she persisted.  “IT’S COUNTERFEIT.  IT’S A COPY. And anyway, IT’S EXPIRED.”

(I could almost hear the, “HA HA,” as a finality to the conversation.)

I picked up the coupon, looked closely and noted that the expiration date is, in fact, 8/31/11 (I never check expiration dates).  I said, “OK, it’s expired.  I didn’t realize that.  But it’s not COUNTERFEIT.”  I added, “And by the way, I used one just like it last week, and the week before, in this same supermarket.”

By then, my head was as cloudy as the whipped cream I was accused of basically stealing.  Thoughts were shooting around with the speed of nitrous oxide propellent.  Should I see a manager?  Should I defend myself to the people behind me in line?  Should I tell the cashier to forget the Reddi-wip because if I couldn’t steal it, I didn’t want it?  Should I ever come back to this supermarket again?  Should I tell the nice bagging young man that I wouldn’t ever dream of such a scheme for a canister of Reddi-wip?

As my head spun, my hands went about their work.  I bagged my things, placed my stuff in my cart and headed out of the supermarket (the exact opposite of the door I entered, I might add).

I began to think of all the cash I’ve spent in that particular supermarket chain, and even checked my receipt for the total I spent that day alone…

I began to think again of that coupon.

And the cashier at Terminal 9.

Of getting accused of conspiring a scheme and arrested for COUNTERFEITING a Reddi-wip coupon.

Like I have nothing else to do with my time/energy/life’s skills and experience?

“… and look at her RUN,” the cashier snarls at the photo.  “Running from the law, sir.”

“No.  No,” I plea.  “This photo is from a backyard cookout.  My 5-year old grandson snapped it on my cell phone as I was getting dessert ready.  Reddi.  Get it?”

“HA, HA!” the cashier laughs and points her finger at me.  “Topless strawberry shortcake for your Motha, you COUNTERFEITER.”

“Silence,” the judge howls.  “I’ve reached a verdict.”  (stares at me)  “Considering no prior criminal record, your ripe old age of almost 60, and your cooperation with law officials, I sentence you, Ms. Couto, to 100 service hours alongside the cashier at Terminal 9, assisting in exposing what you know best… the Reddi-wip COUNTERFEIT COUPON CONSPIRACY, the most heinous of all supermarket crime.”

(I drop my re-usable shopping bags and fall to a heap on my beef) “Oh, no no no no no,” I wail.  “Please nooooooooooooo.  Wip me senseless.  But not Terminal 9…”