Anyway, I’ve stuck with running enough to accomplish all of the above PLUS a Half Ironman.

But every once-in-awhile, there is a training run that just plain socks.

I had one such run last Monday.

I’m training with Runner’s World Challenge for the Marine Corps Marathon.  This is my second marathon, so I kind of know the training components… especially the long runs, building, as the weeks go on.

So preparing mentally and physically for last Monday’s 9-mile run didn’t shock me or overwhelm me.  (Don’t get me wrong.  9 miles is a LOT OF MILES for someone who still considers herself a novice!)  But I knew I had to do it and that’s that.  Problem is that the 3 days prior, Barry and I had been on a mini-vacation in New Hampshire that included a little more eating/drinking/late hours than normal for us.

When 6:30 am showed up on that Monday morning and my wonderful daughter Jane showed up to run the first 6 miles with me… well, I couldn’t find any of my WrightSocks, the anti-blister miracle socks that I always run in (they were all in the washing machine.  Wet).  I haven’t run in anything but Wrightsocks since my marathon run in May 2011 (no, I am not a spokesperson for Wrightsocks nor does this company even know I exist).

I couldn’t find my favorite visor hat, either (I would later find it in my unpacked suitcase), but that doesn’t sock quite as badly.

And it was hot.  Humid.  Sultry.  Summer in late July.

But we headed out, smiling.  Talking.  Me with my weekend dehydrated body, no visor and feet in old cotton socks, trying to keep pace with Jane, and Jane obviously slowing way down to keep pace with me.  We ran along the bike path, happy with its patches of glorious shade…

Until about mile 3, when I could feel my socks bunching and curling.  Don’t think about it, I thought to myself.

Then at mile 4, when the socks began their torture.  Wet.  Bunched.  Making my feet feel all pins & needles numb.

Keep running, I told myself.

At mile 5, I couldn’t take it anymore.  I knew I couldn’t run another step, never mind 4 more miles.  I told Jane I had to stop and adjust my socks.  No problem, she said.

But there was a problem, and at mile 6, as we headed back to my house and Jane would be leaving me on my own for the additional 3 miles, I was almost in tears with pain.  I stopped my run, sat down on my back steps, and took off my running shoes and socks.  Jane advised me against it, but I said I’d rather run sockless than be in this pain.

At mile 7, I could feel the blisters ripping into my heels and arches.

I began to walk.  I walked a half-mile and then began to run again.

But I couldn’t move as I could almost hear the skin ripping.  I thought about calling Jane to come get me.

And I didn’t stop running until I was home.  9 miles.

Then I ran some more.

(But I did head out that afternoon to buy a drawer-full of Wrightsocks… because I want my training runs to really sock.  Not suck!) 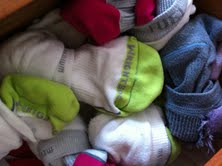