How to make your workouts SO much more enjoyable and productive…

Endomondo, where have you been all my life?

OK.  OK.  So Jane and Barry have been telling me about Endomondo, and maybe I’ve just been a little slow to arrive, but Barry fixed me up with this AP yesterday and there’s no turning back.

You are probably already acquainted with my new best friend, but if not, Endomondo is a sports community based on free real-time GPS tracking of running, cycling, etc. You just bring your mobile device with you and get a complete training log of duration, distance, calories, heart rate, map, history… and more. 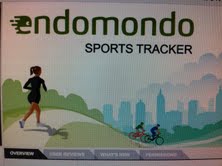 Me and Endomondo went on our first run together today… our first date, so to speak.  I was scheduled to run 4 miles in my Runner’s World Challenge program in preparation for the Marine Corps Marathon 2012, but thoughts of my recent 9-miler (an entire post unto itself), riddled with foot pain, blisters and exhaustion had me a bit run-shy.

But I knew I had to get out there and do it.  So I grabbed my iPhone, found Endomondo just waiting for me to arrive, walked a few steps, pressed START and began running.  I never just begin running.  I always have a plan, a route, generally miled off in my car.  I have “the tree with the V-shaped branch” or “the second turn-around” or “the big rock” as mile markers.

Not today.  Because Endomondo took meticulous notes of my whereabouts… like the most perfect personal trainer or assistant.

Down by the harbor, into town, up this street or down that street, wherever I found shade.

I didn’t have a care in the world.  Enjoying the morning, the bay, the trees, the people, the sights in my little New England town… because my new best friend was doing all the data stuff while I mindlessly ran.

And before I knew it, at the 1-mile mark, I heard the firm, friendly voice coming from the little pouch where I carried my phone.  “One mile in (minutes).  Lap time (split for that mile).”

I smiled and kept right on running.  A new path.  A new route.  I knew I would turn around at Mile 2, but even at that, I knew I didn’t have to exactly retrace my steps because someone named Endomondo would let me know when I reached both miles 3 and 4 anyway.

I felt a new lightness in my step, and when that voice in my pouch announced Mile 2, I was pleasantly surprised with my 10:04 mile.

I turned around to head back home.

But no-one had told me what to do with Endomondo if my phone rings… which it did, right after my happy Mile 2.  I reached for my phone to see the phone number calling in, but I didn’t recognize it.  I panicked a teeny bit because my Mom was hospitalized Monday with the beginnings of pneumonia, Barry had had some blood work done early this morning and Audrey is out of town.

Is this phone number for something related to them? I thought.  I quickly answered to discover a recorded phone message about a dentist appointment next week.  Phew.

But with that message, Endomondo had disappeared.  Come back, new best friend Endomondo on our first outing together, I tried to will him back as I continued to run.  I pressed everything I could think to press as I ran along, but he had ditched me.

In my frustration, I let loose a tirade of curses, some (good ones, I might add) of which I actually made-up as I ran along.  (Yes, this grandmother of 9 kisses her grandchildren with these lips.)  Then I stuck my phone back in the pouch and began to retrace my steps.

Was I on this road?  This doesn’t look familiar.  Crap, now I have to run up that hill because I think I ran down it before.

Then.  Then.  In a truly magical moment, I heard a now familiar voice.  It was Endomondo!  He had come back to announce my Mile 3 data!  (Well, the voice is distinctly female, but I think of  Endomondo himself as male.)

I apologized for the curses… even the brand-new awesome ones.

I think he forgave me because he was right there at Mile 4, too, AND with all the data I needed to review my run.

I know Endomondo has lots of other friends and girlfriends, millions of them, but if he can make me think I’m his one-and-only and overlook my language… well, I’m OK with that. He’s that debonaire.

And I’ll never run again without him.  Ever.