I’m ecstatic to be able to share some amazing stories, photos and video with YOU from the P&G Family Home in London. I’m working with P&G as one of their state-side Blogger’s and I couldn’t be more proud or more honored! I’ve had the amazing opportunity over the last few months as we’ve counted down to the Games to speak and meet with some of the Olympians and their mothers.

A HUGE honor for me was meeting and interviewing Ryan Lochte’s mom, Ike. She was one of the most gracious, kind and sweetest lady’s ever! She spent so much time with me on the phone and I just appreciated being able to connect with her as a mom. Her son is my son’s hero, and it was wonderful to be able to share that with her.

As I’m sure you were, too… we have been GLUED to the TV every single night watching the Olympic Games coverage. The race that started the Games for us was the 400-MEDLEY – the Lochte and Phelps showdown! My son William had been waiting for THAT particular race since last week. We made us all stay off the internet (which was touch tough for me!) so we wouldn’t get a spoiler alert! We simply couldn’t wait for this race to take place… the McClelland Family was ready!

My son William was THRILLED!

As I watched the footage of him swimming and then getting his GOLD MEDAL, I couldn’t help but think of Ike and what she was feeling for her son. I could feel her passion and her love and the pride she had for her son when we chatted a couple of months ago. She truly was his biggest cheerleader and it was a beautiful thing to hear from a mother. She was so excited about him heading to London with the hopes of winning a GOLD! To actually see him win GOLD must have been a dream come true for her. Truly.

As part of P&G’s Thank You Mom campaign, they shared with me an incredible video of Ike Lochte and family and friends celebrating Ryan’s gold medal win in the 400-meter individual medley in the Gillette Lounge at the U.S. P&G Family Home! 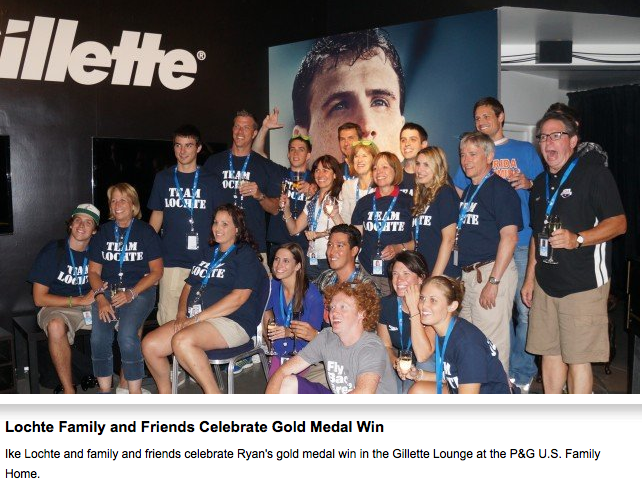 Ryan captured the first gold medal for the United States in this year’s Olympic Games!

The footage features an emotional toast to Ryan and sound bites from Ike about her son’s gold medal win and the victory party hosted at the P&G U.S. Family Home. This video made me cry… it was BEAUTIFUL to see and to listen to…