I know there’s competition between siblings.  It’s a natural thing.  School and sports are 2 areas which can bring out the sibling rivalry.  I know it’s something I can’t prevent 100%, but I’m trying my best to make it be a healthy competition, not a battle! 🙂

I got my first-ever dose of it today while we were driving home after William and Alexander’s 2nd swim meet.

Our team coaches were MORE than happy with Ben swimming a 25 freestyle today at the swim meet, so they popped him right in! 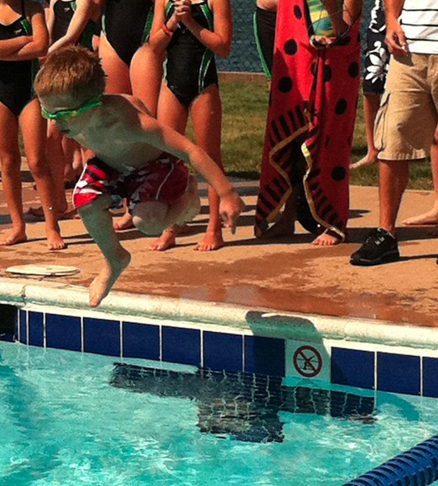 He did awesome! I was so proud of him and my heart just melted while he swam. I had tears in my eyes watching my 3rd baby boy swim down that pool. Such a beautiful moment.

I love hearing my son Alex screaming to him to breath to one side! It made me smile to hear him try and encourage his brother along!

But it was in the car on the way home that I began to see some of the competition between the brothers. I was telling Benjamin how proud I was of him and that he was only 5 years old and did such a great job!

I looked at him and said, “But you’re ONLY 5 years old! You swam against kids who were all older than you!”

Alexander… trying to help the situation… said, “Ben – when William swam his first race he was 5 and had to walk it into the wall. You didn’t even have to walk!”

“Mom is that true?” William asked.

(Oh, man… thanks for putting me in the hot seat ALEX!)

I knew I couldn’t lie because we have a video of William to prove it (that would be asked to be taken out), but I also didn’t want to make William feel bad. So I did the best I possibly could for that moment in time.

I answered… “Well… (half laughing) William, you did walk it into the wall, but only because you couldn’t see where the wall was! And Alex, you just swam your first meet on Tuesday and did an AWESOME job flying down the pool! So just think Benjamin, if you keep working as hard as William and Alex have been working, maybe someday you guys will all be on a relay together and go to the Olympics!”

OK… I don’t know if I did the BEST job answering them, but I wanted to honor the fact that Ben DID do an awesome job and not down play William or Alex’s swimming skills at all. They all work really hard and they all want to be really good. I love that about them.

It got me thinking though, competition between brothers in school and sports may be rough as the boys get older. William is one of the most competitive people I’ve ever met. He’ll race you to the car just to win. I don’t want him to think it’s a bad thing to be competitive, but I want him to learn when to “cool it” off with the “who-won” stuff. I saw the claws come out today in the car. I want healthy competition, not any other kind.

I guess as the boys get older I’ll get better with it and know better how to handle it, but in the meantime… hey… at least 3 of them can swim! 🙂