I love words and I use words all the time, but I cannot possibly use enough words to describe my happiness for my “oldest” friend Connie in her quest, her goal, her dream to run her first 5k at age 59.

Connie and I met, both age 17, during our first days of college back in 1970.  A lot has happened since then.  Marriages. Babies.  Passing of beloved parents.  Kids growing up and leaving the nest.  Grandchildren.  But one thing we never saw coming back in 1970 was some day sharing a joy of running together.

Maybe it’s turning 60.  Maybe it’s a new look at life and it’s great, great dreams at our fingertips… or in our footfalls. 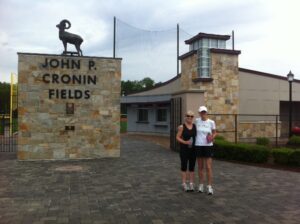 But whatever it is, watching Connie crush her goal and cross a dream off her list was a mighty fine set of moments.

So… I’m going to give you Connie’s own words, her photos, and her great, universal message that if you believe, anything can happen:

I had a goal: a non-athlete, I planned to run 5K before I turned sixty years old this fall.  Today that dream was realized.

This morning at 8:00 was the time I’d arranged for my graduation run from the Couch Potato to 5K program.  I received permission from our athletic director to use the brand new, state-of-the-art track at La Salle Academy, the Catholic high school in Providence where I work.

Dan, from our wonderful maintenance crew, assured me that he would open the parking lots and the Cronin Gates that lead to the track.  “I won’t forget,” he said.

After a week of sweltering, near 100 degree weather, we were cooled last night, finally, by a refreshing thunderstorm.  Intermittent showers were predicted for today.  I prayed that they held off between 8:00 and 9:00 a.m.

Getting up at six o’clock, I was relieved to see that though the skies were gray, there was no sign of rain…until we sat down to breakfast and it started to pour.  I couldn’t believe it.  I had decided that if the rain was light I would go out anyway, but did not relish doing my run in a downpour.  The rain continued.  So disappointing.  Tony was certain that it would stop, and I hoped he was right.  It would have been incredibly anticlimactic to postpone the celebration to another day.

I checked my computer for messages and there was one from my dear, beloved friend Sharon, who was to accompany me on my run.  She had responded to my post wishing for no rain:

It’s not raining here…the clouds are breaking… Connie…it’s the most perfect day for your mighty run! See you there! I’m already smiling! xo!  Sharon was on her way.

He smiled at me and gave a thumbs up.

As I finished stretching, our son Dave arrived, and we headed off to the track, the rain still spitting. Not bad.  I wanted to be there a little early to be sure that all was in order.  Of course Dan had come through.  I was ready.

And the rain stopped.

The first to arrive were Sharon, her husband Barry, and their daughter Jane.  It is Sharon who first led me to attempt this goal, directing me to a program that was “doable” for someone like me who had no experience running.  I was overjoyed to have her with me for the culmination of our journey together.  We hugged each other in happiness and love.

Sharon and I walked onto the track, Jane at our side for the warm-up lap.

We broke into a run, my family and friends cheering us enthusiastically, and as I rounded each lap, I saw more arrivals: my oldest friend, Annette, whom I’ve known virtually my whole life and who has been my rock, always; my stitching friend Robin;  Maryann and Mandy,  two of my friends in education, Mandy with her son in tow; our next-door neighbors Mike and Whitney; Joanne, another dear friend from early childhood;  my brother-in-law Fred.

In the cool air, Sharon by my side, hearing cheers as we rounded each lap, complete with cowbells and signs, 3.0 miles flew by.  Because the 5K ended on the far side of the track, I decided to complete lap 13 so that I would finish right by my little group.  Sharon dropped back to allow me to finish on my own, rejoining the others and telling them at what point I reached 5K.  At that moment, I heard a loud cheer from across the way.  I raised my arms in victory and sprinted the last half lap.  I wrapped my arm around Sharon’s shoulders and we walked the cool down lap together.

Lots of hugging and kissing and tears and picture taking ensued.  Annette presented me with a beautiful victory bouquet.  Barry informed me that the 5K had taken an amazing 38 minutes.  Though she says not, I’m convinced that Sharon’s pace pushed me to my personal best.

Back home celebrating with our guests, Tony presented me with an athletic award.  Yes, I the former couch potato now have an athletic award,  signed by the athletic director of Tony’s school.  It was the icing on the cake.

Reaching my seemingly impossible dream of running 5K has been an incredible, amazing journey.  I could not have reached it without the constant support and quiet enthusiasm of my wonderful husband, or Sharon urging me to go for it and encouraging me at every step, or her daughter Jane, an experienced runner, assuring me that I could do this; the people at the fitness center, manager Liz, who got me onto the right pair of shoes, wellness coach Shannon, who with her calm support has gotten me through some rough spots, and especially Colleen, my personal trainer, who taught me I was capable of far more than I realized, and who constantly urged me:  “Push through!  Push through!  You got this!” the wonderful folks, novices like I, on the Couch Potato to 5K facebook page who have reached their goal and convinced me I could reach mine, my family and friends, and Mom and Dad, my angels in heaven who are and always will be the wind beneath my wings.

I believe anything is possible.

Jane, Sharon, and Connie, starting out at the La Salle Academy track.

with Sharon by my side

with Dave and Tony

with Sharon and Jane

Cheering section How could I not complete the 5K with these wonderful folks cheering me on?

with my ATHLETIC AWARD!!!

Connie… you did it!

You are a great inspiration to everyone out there who has a dream.

And, old friend, I LOVE YOU!