What do Barry’s new shoes and James Brown have in common?

Something simple, but that makes life so much more pleasant.

Barry has been telling me that he needs new shoes.  This doesn’t mean that I can run out and get them for him… because he needs to try them on, walk a few steps, check them out, etc.  But Barry’s a very busy guy, and, you know… tends to forget he needs new shoes until each morning, when the old shoes begin reminding him.

Well, all that changed yesterday afternoon.  We headed to DSW, went directly to the men’s section (oh, how the women’s shoes were calling my name), where he spotted his favorite shoes… his go-to style for business and leisure.

I talked him into buying 2 identical pairs of Bostonian Flexlite… a good solution for life’s continuous simple pleasures.  And some new Calvin Klein socks, too.  Hey, gotta keep my guy feelin’ comfy and lookin’ good… 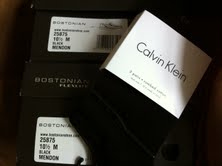 So what do James Brown and Barry have in common?  They both can sing and dance to the same tune…

Come here mama, and dig this crazy scene
He’s not too fancy, but his line is pretty clean
He ain’t no schmooze…
Pop-up’s got some brand new shoes.

Maybe the next post will be Barry singing and dancing…

He ain’t no schmooze…
Pop-up’s got some brand new shoes!