My son William took to swimming like a fish to water 3 years ago.

He just loved it from Day 1.

He looks forward to swim practice.

He gets excited for swim meets.

And he sits and watches videos on YouTube of his favorite swimmers.

My husband and I have always had the kind of attitude that we want to expose our sons to as many activities as we can and when they find one they love, we’ll help in anyway to harness that love.

I personally love that he’s having fun, meeting lots of wonderful kids and participating in a sport that is good for his body.

I also love that William has heroes in the sport of swimming that are incredible role models for him. As a mother, especially in this day and age, it’s beyond important to me that William looks up to heroes (men and women) who are making a positive impact and doing positive things.

Someone he thoroughly looks up to is his swimming idol, Ryan Lochte.

William first heard about Ryan Lochte last summer during his summer swim league. One of their coaches kept making references to Ryan Lochte and what an amazing swimmer he is, so William immediately asked me to look him up and he began to follow him. One of his coach’s last summer encouraged the young swimmers to really find a high caliber athlete to follow and watch. I thought it was a genius idea because it made William’s love of swimming just that much more full. To be able to watch and see swimmers training for something like the Olympics… it was really cool to see my son start to make the connection into swimming as a high intensity sport, and that people can go far in swimming.

With all this being said, as William’s mom… I wanted to hear from the moms of these athletes. I was a swimmer myself growing up, only making it to the Junior National level, but thoroughly loved and enjoyed the sport of swimming for over 15 years. Seeing my son participate now, it’s a dream come true for me. The big difference is that I’m now on the benches, not in the water.

When P&G opened up the opportunity for me to speak with Ryan Lochte’s mother, Ike… I literally JUMPED at the chance! 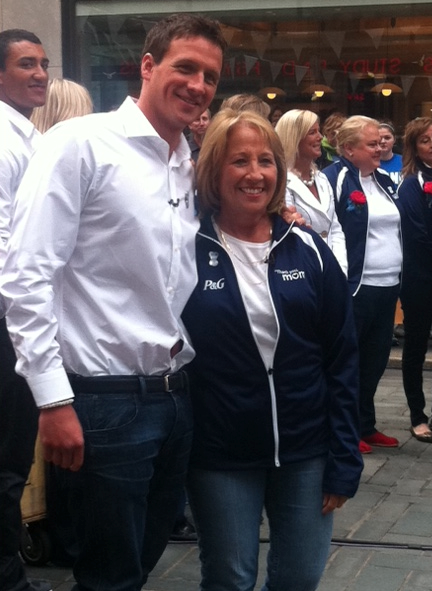 Her son is my son’s hero… and I wanted to make sure I let her know and to thank her.

When Ike got on the phone with me, I instantly felt at ease. She’s so sweet and so kind and was so willing to answer my questions. I was so appreciative of that because I know people’s time is precious and I didn’t want to impose too much in her day. When I expressed my appreciation, she said to me (and I could tell with a smile), “I have all day! It’s OK!”

I had to ask her about Ryan’s talent. It always amazes me to see how some people in life are just so beyond talented at certain things. Ryan Lochte is an elite athlete, one who is making waves (no pun intended!) with his swimming talent. I couldn’t help but ask her, “When did you know Ryan was ‘different’?” And I meant that in the best way possible… different in the sense that he was better than the average swimmer.

Ike responded, “Ryan’s first swim meet he swam against older kids. He beat some of the 9 year olds. I could tell he had a great feel for the water. I just knew.”

I loved that answer. It gave me goosebumps because it was incredible hearing that she knew on some level that Ryan had a talent in the water. And I love that she could tell that he had a great feel for the water.

I really was excited to tell Ike about my son William’s appreciation for her son and that he truly thought of Ryan as his swimming hero. Ike was so appreciative to hear that. I asked her, “How does it feel to know that your son is looked up to by tons and tons of young swimmers? That he is the “one” they think of when people say ‘fastest swimmers in the world’.”

“Wow… thank you. It’s funny because I don’t see him as being someone different or special in the eyes of others. I remember when he was swimming next to Michael Phelps and Eric Vendt and thinking, WOW’s he’s swimming next to them. It’s not until someone says something to me. I’m just so proud. So proud. I always wanted to be a mom and to know my son is looked up to, it’s special.”

My eyes filled up with tears hearing her express this, I could just feel the love and feel her pride in Ryan. It was very special.

The P&G “Thank you, Mom” commericals and Raising An Olympian series are some the most powerful videos I have ever seen in my life. I was excited to ask Ike what she thought of them, especially being an Olympic-hopeful mom herself.

I didn’t realize until speaking with Ike that she was a swim coach, I loved finding that out. When she told me that, I asked her about Ryan’s future. What she thought it would be like… “Ryan will stop when it stops being fun. He’ll find something else. That’s the thing about Ryan, he will absolutely find something else when it really stops being fun and it’s getting to be too much.”

As a mom, I loved hearing Ike answer like that. I know so many parents who just keep their children in activities that they hate simply because they’re good at it. Your child needs to love what they’re doing and find it fun. Hearing an Olympian mom utter those words held a lot of weight to me because I love that she still cares about it being fun for her son.

And so, as the London 2012 Olympic Games Games creep closer and closer, I want to wish Ryan Lochte luck at trials this week and then (oh, yes… I’m thinking positive!) at the Olympic Games.

He’s a wonderful role model for swimmers out there, but as a mom, I now know… it starts from home.

Ike Lochte, you were a pleasure to chat with and I loved hearing you talk about your son. You’ve done an amazing job and (mom to mom) I couldn’t be more proud to have my son look up to your son.